With Tunisian President Kais Saied seizing power, in what has been called a coup by the country’s largest political party, it seems that the last stronghold of democracy in Northern Africa, having emerged from the Arab Spring, is falling. Celebrated by some, such a transition could have its consequences especially with the involvement of Gulf dictatorships.

Tunisia is often held up as the one standing success story of the 2011 Arab Spring. Having overthrown former President and dictator Ben Ali, during the Jasmine Revolution, the people of Tunisia have experienced a bumpy ride since, but have maintained a democracy. This could all be changing soon with Gulf despots looking to pick up the pieces of any shattering of the nation’s democratic model.

Fears are now emerging, of a repeat of the affairs which transpired in Egypt, destroying the democratic system set up in the country and installing a military dictator. However we aren’t quite seeing such a dramatic shift and there are key differences between the move to dissolve parliament, fire the prime minister and consolidate power, in Tunisia, and the all out military coup which occurred in Egypt in 2013.

But, as there are differences between Egypt’s coup and Tunisia’s, there are also some alarmingly similar forces at work. In Egypt the target was the democratically elected President Mohamed Morsi, he represented the Muslim Brotherhood and in order to remove him, we now know that the UAE and Saudi Arabia both worked to bankroll his overthrow. In Tunisia, for years the UAE and Saudi Arabia have been working to oust the ruling Ennahda Party, which is connected to the Muslim Brotherhood.

The two Gulf regimes have historically bankrolled the opposition to Ennahda and Abu Dhabi was even accused of attempting to organise a coup in Tunisia. As President Kais Saied took control, the office of Al Jazeera came under attack by his security forces who stormed the Qatari funded outlet’s building and forced its journalists out. This has been interpreted as a clear attack on the channel, due to its political leanings towards the side of the Muslim Brotherhood.

Last year it was also reported that Turkish intelligence had foiled an attempted coup plot inside Tunisia, which was allegedly coordinated by the United Arab Emirates. Around that time, a group of demonstrators calling themselves the ‘Salvation Front’ took to the streets of the capital to condemn the Ennahda Movement and its alignment of the Qatari/Turkish axis, it was later discovered that the facebook group for the movement was ran by two individuals based in the UAE. 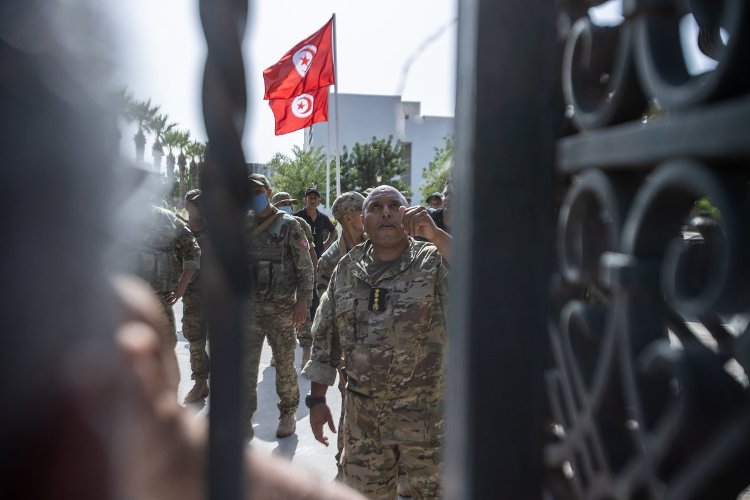 The UAE may have well backed last year’s alleged coup attempt, after their anti-Muslim Brotherhood ally in Libya, Khalifa Haftar, was starting to suffer loses following the introduction of Turkish military aid to help the GNA forces of Fayez Al-Sarraj. Being involved in combating neighbouring Tunisia’s Ennahda Party, could be in part about securing a pro-Haftar dictator for the UAE. The UAE has a well known track record of anti-Muslim Brotherhood and anti-democracy action, having backed reactionary actors in countries like Libya, Egypt, Bahrain, Sudan and Yemen.

It’s also no secret whose side the UAE, Saudi Arabia and even their allies like Egypt are on, having celebrated the political turmoil in Tunisia as the “final fall” of the Muslim Brotherhood. Riyadh and Abu Dhabi have also been using social media accounts to whip up anger online and drive the country further into chaos.

Prominent Saudi journalist, Abdul Rahman Al-Rashed, wrote a celebratory opinion piece in the kingdom’s Asharq Al-Awsat newspaper saying something quite rich for a supporter of Saudi Arabia’s regime: “It is not surprising that the “Brotherhood” has fallen in Tunisia now, but rather it is years later than was expected…they were associated with chaos, assassinations, and deliberate obstruction operations to thwart government action”.

The economic problems, government mismanagement, corruption and the anger over the mishandling of the current health crisis, are all real issues and Tunisia has risen up many times since 2011 to demand a change. None of these real issues should be undermined, nor should it be stated that there is no Muslim Brotherhood alliance. But when it comes to a domestically created group which engages in a democratic process and the power of foreign brutal dictatorships with some of the worst human rights records on earth, it’s clear which option is more detrimental.

It cannot be understated, the insidious role that the UAE and, to a lesser extent, Saudi Arabia, have been playing to stir up civil unrest in Tunisia. If President Kais Saied crowns himself dictator, aligning himself with Abu Dhabi and Saudi Arabia, this could have serious repercussions for the country. It is not as of now certain that we will see such a takeover, but regardless of what transpires, the UAE and the Saudi will not stop working to destabilise Tunisia in order to remove the Muslim Brotherhood’s influence.

Importantly, if the West, which claims to care so much about democracy, truly cared for it at all, it would quickly drop its alliances with the brutal regimes of Saudi’s Mohammed Bin Salman and the UAE’s Mohammed Bin Zayed. The destructive role of these Gulf actors and their strides towards crushing all Arab democracies, whilst remaining the best of friends with the self proclaimed “worldwide spreader of democracy” [the US] shows exactly which side the American government is truly on.

Disclaimer: Tunisia's instability and coup are backed by the UAE, Saudi by Robert Inlakesh - Views expressed by writers in this section are their own and do not necessarily reflect Latheefarook.com point-of-view