Skip to content
Afghanistan
Spread the love
American soldiers on the tarmac of the Bargam airbase. – All US and NATO troops have left the facility, signalling the complete withdrawal of foreign forces from Afghanistan by September 11 this year. Photo: AFP / Jimin Lai
The wild men who fought America’s ‘forever war’ will not and should not be forgotten as a new era of Afghan conflict dawns

When the US invasion of Afghanistan secured Bagram Air Base in January 2002, a Special Operations officer said he motivated newly arrived 82nd Airborne Division troops with a human skull.

A human skull, given to him by fellow soldiers who purchased it legally online, was mounted in his office at MacDill Air Force Base’s Special Operations Command headquarters in Florida wearing a 82nd Airborne Division’s beret, he said.

“I’m a skull worshipper,” Special Operations Command Sergeant-Major Raymond Cordell said in an interview at the time in Bagram Air Base, 67 kilometers north of Kabul.

“Young soldiers just tend to relate to things like that. That’s just the nature of people who join the army and do this for a living,” Cordell said.

“As a leader, you try to hone out those things that different soldiers are attracted to. For me, it has always worked to be skulls.”

All the motivation, firepower, human lives, cash, diplomacy, torture and slogans which the US expended during its 20-year-long war in Afghanistan are now gone with the departure of US forces from Bagram Air Base.

The US-backed Afghan government received control of Bagram this weekend. Looters quickly stripped the base of computers and equipment. 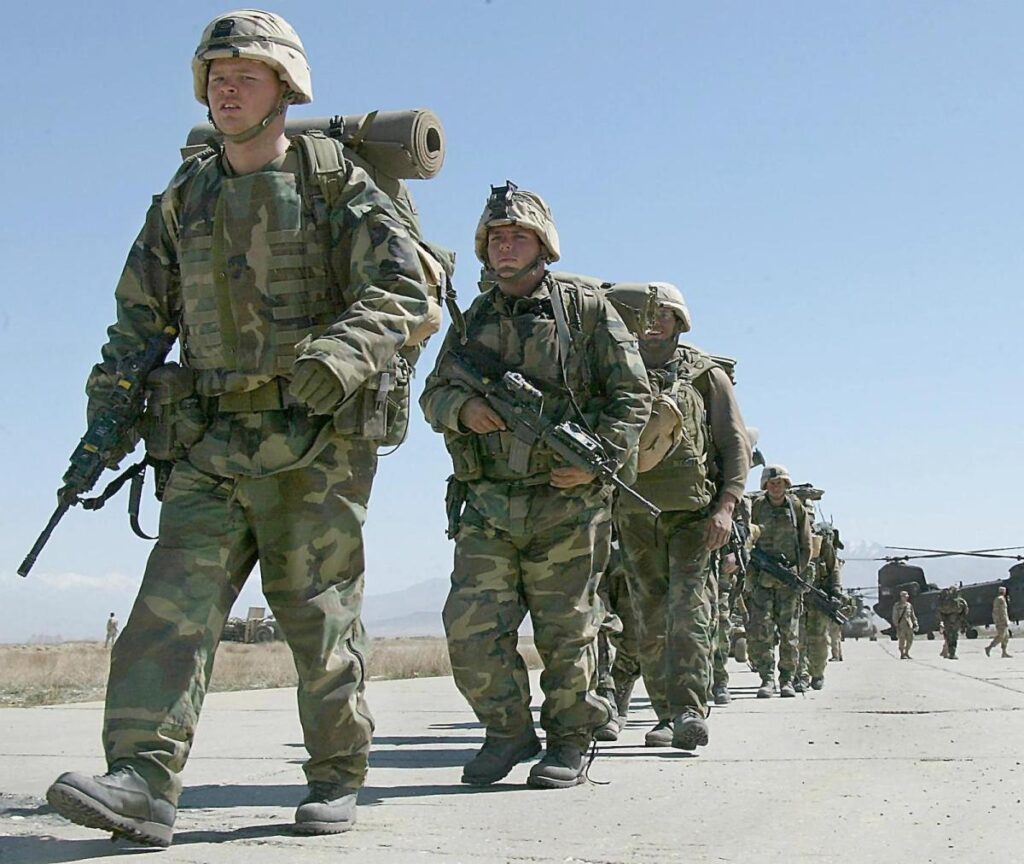 US soldiers arrive at Bagram Air Base, in Bagram on March 12, 2002. Photo: AFP / Roslan Rahman
Among Bagram’s earlier ghosts were the beds in barracks originally built by the Soviets, during their similarly disastrous 1979-1989 war.

An irony, obvious even then:

Cordell’s 82nd Airborne and other arriving US troops initially slept in Bagram’s Soviet-era beds, among Cyrillic graffiti scrawled on the barracks’ walls, near wrecked and abandoned Soviet MiG-21 warplanes on the bomb-gouged runway.

Today, the graffiti on Bagram’s walls was written by Americans whose dream – of creating a functioning democracy in control of Afghanistan – remained a bloody and expensive nightmare from the beginning.

Bounty hunter Jonathan Keith “Jack” Idema was among the ill-fated Americans who tried and failed in Afghanistan.

Idema was arrested in Kabul, put on trial, convicted and imprisoned in Afghanistan for kidnapping and torturing Afghans.

Idema had become notorious in Kabul for threatening to assassinate American journalists, international aid workers, Afghan mujahideen and anyone else who triggered his volatile temper.

Idema arrived as a civilian in Afghanistan, a self-declared bounty hunter, alongside U.S. invasion forces in 2001.

During the first few years of war, Idema strutted around Kabul dressed in military fatigues and combat boots, with a Russian AK-47 assault rifle shouldered across his back and a holstered Glock pistol.

A handful of paid, armed Afghans formed his posse.

Jack Idema died of Aids-related complications in Mexico. Photo: Agencies
“That’s what I love about Afghanistan, if you tell someone you are going to kill them, they fucking believe you,” Idema said during our interviews in December 2001 and January 2002 in Kabul.

Idema’s kill fantasies ended in May 2004.

Afghan security forces arrested Idema, put him and six colleagues on trial, and imprisoned them in

Fast-forward to a seemingly bleak future, when US and international militaries vanish.

If, as widely expected, the Taliban return to power, their Islamist victory may again result in escalating the Muslim insurgency in India’s volatile Kashmir state. 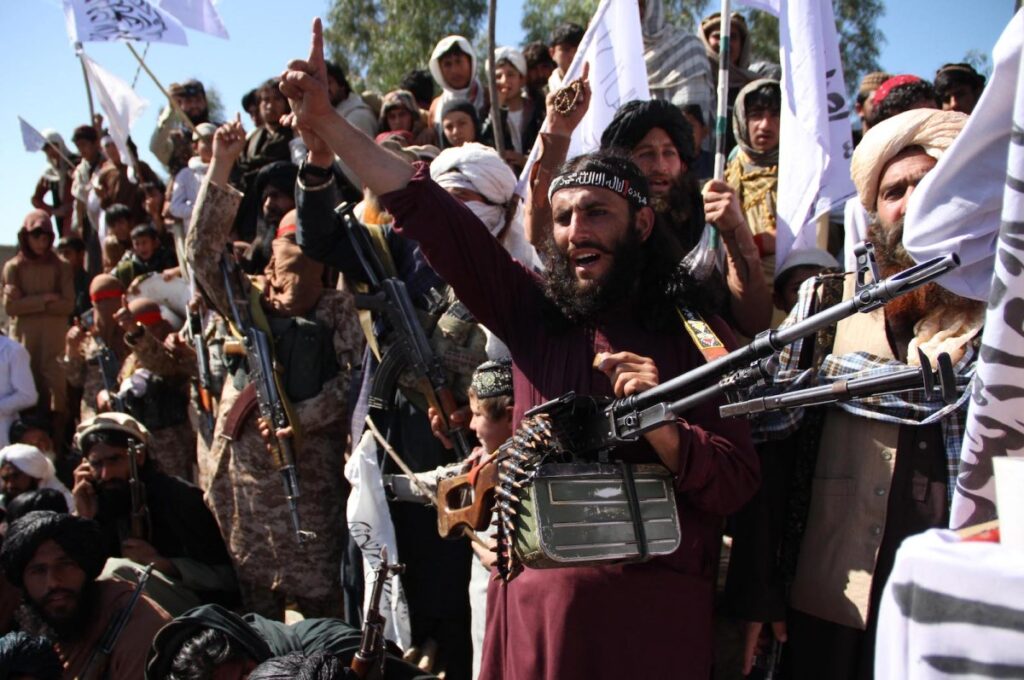 Afghan Taliban fighters and villagers attend a gathering as they celebrate the peace deal signed between US and Taliban in Laghman Province, Alingar district on March 2, 2020. Photo: Wali Sabawoon / NurPhoto via AFP
In 1992, when Afghan mujahideen achieved victory and seized Kabul, the most powerful Muslim guerrilla leader in India’s Kashmir was Syed Salludin, supreme commander of Hezb-ul Mujahideen, or Party of Holy Warriors.

Black-bearded Salludin’s 15,000-strong mujahideen were the deadliest and largest of several guerrilla groups fighting against what they cursed as the “Indian occupation forces” in Kashmir.

“If someone does a theft, his hand must be cut off, so society can be saved,” Salludin said in an interview at the time in a safe house in Sopore, Kashmir.

Some of Salludin’s rebels had visited Afghanistan which was admired by Islamist guerrillas around the world as the best and most violent campus available to learn how to fight.

Afghanistan offered at that time – and still does now with Kabul’s limited control of the countryside – sophisticated weapons training with other Islamist guerrillas and proven, experimental, insurgency tactics.

“More than 4,000 Kashmiri militants have received training in Afghanistan and, at present, more than 3,000 are there in Afghanistan now. That’s a total of 7,000,” Salludin boasted back in 1992.

One of his “battalion commanders,” Mohammad Abu Nasar, 36, proudly introduced a handful of foreign Muslim guerrillas who crossed from Afghanistan into Kashmir and joined their fight.

“I went to Afghanistan two years ago to fight, and came here to Kashmir one month ago,” Masood said.

“I came to share in the jihad. There are 300 to 400 Arabs here, from Libya, Algeria, Bahrain and other places.

“My organization in Sudan, the Akhwan Muslimeen (Muslim Brotherhood), first sent me to Afghanistan and then said: ‘If you’d like to go to Kashmir, go’.

“They sent me for the experience. Here you feel the meaning of Islam and jihad.”

Washington is expected to continue monitoring and intervening in Afghanistan after the US military withdrawal is announced as officially completed, before September 11 this year.

Any Americans remaining in Afghanistan to support the vulnerable regime, however, may want to heed the experience of Russians who stayed in Kabul after Soviet forces withdrew in 1989.

Yuri Tyssovski, the Kabul bureau chief of the Russian news agency TASS, chose to change his residence when his countrymen withdrew.

Hurriedly boxing up his belongings in his suburban Kabul home in 1989, and calling for his pet German shepherd which was trained to sniff out land mines, Tyssovski said in an interview:

“I am only moving into the Soviet Embassy across the street for safety. My boss asked me if I wanted to leave Afghanistan, but I told him no, because I want to stay on and continue my work. It is my duty.

“I will stay one year more. It will be difficult for us. There are various predictions of how the situation will be.

“It may be awfully bad, moderately bad, not so bad, or even good. So, let us see. It is impossible to guess anything, so why be worried about it?”

Tyssovski had recently been wounded in a U.S.-backed mujahideen guerrilla attack during a Soviet media trip in eastern Afghanistan.

Pulling down one side of his pants, he displayed horrible scars on his thigh where shrapnel ripped into him.

“I have a whole arsenal in this house, including hand grenades which I hate. But I need them for protection.”

He raised his glass of vodka in a toast and laughing, in an almost painful way, said:

“One day the rebels are going to come for me. But I am ready. I have already cut off my balls and put them in the refrigerator, so I can hand them to the mujahideen when they arrive!”

Disclaimer: American ghosts of war will haunt Afghanistan By RICHARD S EHRLICH - Views expressed by writers in this section are their own and do not necessarily reflect Latheefarook.com point-of-view