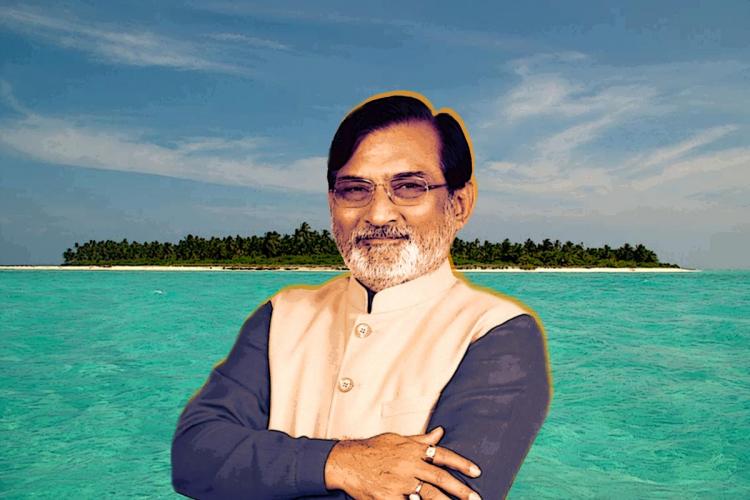 In many more ways than one, the residents of the Lakshadweep Islands take pride in their traditional culture, while maintaining significant environmental safeguards to protect the island. The islands are protected under special provisions where liquor sales are not allowed, outsiders cannot buy land there, moreover, non-residents cannot visit the islands without special permission from the administration.

But for the past few months, there has been an uneasy disquiet among the islanders and for last few days, the hashtag #SaveLakshadweep has been spotted on social media. Some celebrities and political leaders from Kerala have spoken for the island and have warned that the islands have fallen into the wrong hands. The issue began with the death of Dineshwar Sharma, the former Administrator of Lakshadweep on December 4, 2020 following a severe lung disease. Praful Khoda Patel, a former MLA from Gujarat who has worked closely with Prime Minister Narendra Modi and Union Home Minister Amit Shah in the then Gujarat cabinet, took charge as the new Administrator. After this, began a slew of reforms that many residents are seeing as a push towards an autocratic rule.

According to the people’s representatives in the islands, no public consultations were held before the reforms were brought by the Administrator. They expressed their fear that Patel’s motive was to destroy traditional life and cultural diversity of the people of Lakshadweep.

The Development Authority Regulation appears to be quite a contentious reform, and according to a report in The Hindu, hundreds of the islands’ residents have written to the Administration opposing it. This reform, which once in effect, would allow for “orderly and progressive development of land in both urban and rural areas and to preserve and improve the amenities thereof; for the grant of permission to develop land and for other powers of control over the use of land; to confer additional powers in respect of the acquisition and development of land for planning”. The regulation would also allow for building, engineering, mining, quarrying and other such operations on the ecologically rich and sensitive islands under its definition of “development”.

Patel has also allegedly given orders to widen the roads and raze houses, despite the fact that Lakshadweep has very few vehicles and mostly only two-wheelers.

“We are happy to have wider roads, but when they propose to widen existing small roads by destroying houses on either side, how can we agree?” questioned National Congress Party (NCP) Lakshadweep President, Bunyamin. “The islands already have space constraints. Many families will just have one house, what if they lose that? Some islands are just 500 meters wide, so if they acquire land to widen, these people will have to live by sea,” he told TNM.

Attempts to sever links with Kerala

Located around 150 to 200 nautical miles from Kochi, the ten inhabited islands comprising Lakshadweep have a population of over 60,000 people, of which the Muslim population is categorised as Scheduled Tribe. Almost all the islands speak Jeseri, a dialect of Malayalam (the only exception is Minicoy, where they speak Mahal), and from medical facilities to higher education, the islanders largely depend on Kerala.

However, according to some, the Administrator’s new decisions are also allegedly meant to cut Lakshadweep’s links with Kerala. In his letter to the President, Rajya Sabha MP from Kerala, Elamaram Kareem wrote, “The administration has also decided that the islanders should no longer rely on the Beypore port for freight transit. Instead, they should depend on the Mangaluru port for this purpose. This decision will also adversely affect Beypore, which is closely associated with the island since decades. Is is alleged that the decision is aimed at severing Lakshadweep’s ties with Kerala.”

The Administrator has also allegedly closed down all dairy farms operated by the Animal Husbandry Department, and the draft law in the name of ‘animal preservation’ intends to ban slaughter, transportation, and selling or buying of beef products. Islanders also say that Patel has also directed to cut the non-vegetarian menu from midday meals.

“It is not that we were self-sufficient, we were dependent on the mainland. But that doesn’t mean that we can be taken for granted. Things were all fine until December 2020. Now they say that our children won’t get non-veg dishes as their midday meals. Until now, over the years, kids were served with non-veg dishes. Unlike in the mainland, we don’t get good vegetables here. Non-vegetarian food and beef are a part of our culture,” Fathima, a resident of Minicoy, told TNM. “Every celebration we gather together in the village houses. We don’t have celebrations at home even during Eid. When these amendments are implemented, we will not be able to have a peaceful life.”

Kerala Chief Minister Pinarayi Vijayan also took cognizance of the issue on May 24. Calling the reports coming from Lakshadweep “serious”, he said that that situation is a threat to life and culture of the islands’ residents. “Lakshadweep and Kerala have a close relationship […]. Kerala and Lakshadweep are mutually dependent. Through education, employment, medical treatment and trade we are connected to each other. But now, there are attempts being made to destroy this connection. Such stands are taken on narrow thoughts. The authorities should withdraw from such attempts,” he said.

Other moves that have residents concerned

The administrator has also allegedly destroyed sheds where fisherfolk kept their nets and other equipment on the pretext that these violated the Coast Guard Act. These buildings had been constructed under an exemption provided to the fisherfolk, and are now being destroyed without warning, Elamaram Kareem said in his letter. About 38 anganwadis have been closed, and 190 people were terminated from the Tourism Department along with educational institution staff. Many were expelled from the Department of Animal Welfare and Department of Agriculture as well.

“Hundreds of contract labourers working under various departments of the union territory have lost their jobs, and every day there are orders to terminate casual and contractual staff from different government offices,” Syed Mohammed Anees, the Lakshadweep Student Association President, said.

While jails and police lock ups of the islands are empty due to the negligible crime rate, the administration also allegedly plans to implement the Goondas Act in Lakshadweep. “If this Act is brought, they can put anybody who protests in jail. Basically they want to silence us and bring all kinds of privatisation, which will totally harm the sanctity of the Islands,” Ali, a resident of Kavarati Island, said.

Another law that was proposed in Lakshadweep is panchayat regulations to make those with more than two children ineligible to contest panchayat elections. One Twitter user, who also tweeted #SaveLakshadweep questioned the need for such a law when the total fertility rate of Lakshadweep is 1.6, well below the upper limit of 2. Island residents have alleged that this law has been brought in to avoid many prominent leaders taking part in the elections.

Kareem pointed out in his letter that the restriction on use of alcohol in Lakshadweep due to cultural and religious reasons has also been lifted despite requests to maintain the ban. Earlier, there was only one liquor bar on an island named Bangaram at a resort. All other islands were dry and travellers were not allowed to carry liquor. “Now the administration has allowed the construction of bars in four islands, which can cause significant damage to peace here. This can lead to crimes,” Bunyamin said.

He added that due to COVID-19 regulations and the current lockdown, the administrator can misuse the situation to implement reforms, including denying permission for protests. “Here, the Lakshadweep elected representatives are MP and Zilla Panchayat. So whatever reforms the administration is planning have to be discussed with elected representatives. But Patel never bothered to do that. He drafted all these reforms sitting somewhere else.”

“He does not even live here, and operates out of somewhere else. Earlier, only civil servants were appointed as administrators. They all knew the culture of the islanders. But Patel is leading an autocratic rule,” Bunyamin added. Unlike Lakshadweep’s previous administrators, Patel is a politician — he was the former Home Minister of the state of Gujarat.

The pandemic on the islands

Many are also blaming the spike in COVID-19 cases at Lakshadweep – which recorded its first COVID-19 case in January of this year, having remained a haven untouched by the pandemic the whole of 2020 – on relaxing the quarantine measures under Patel’s administration. After Patel took charge as the Administrator, the earlier quarantine and testing rules – which some experts have credited for keeping Lakshadweep COVID-19 free for 2020 – were also relaxed.

Previously, the standard operating procedures (SOP) mandated for passengers to quarantine for 14 days at guesthouses run by the UT administration in Kochi, or in two hotels that were used for this purpose before they took an RT-PCR test. Similar arrangements had been made in Kozhikode, Kerala and Mangaluru in Karnataka also. After people arrived on each island through ship or at Agatti Island, where the airport is, they would have to undergo a test and a 14-day quarantine. However, this changed in December when the new SOP waived off the quarantine period in both “mainland” India and Lakshadweep too. The new guidelines only required one to carry a negative RT-PCR approved report from an ICMR-approved lab to come to Lakshadweep Islands.

Anees alleged that now, the test positivity rate in the islands has many times crossed 60% now.

“We will fight against it both politically and legally. Our fight is not against the BJP government but against the administrator’s autocratic rule. The administration releases the draft of each reform in around 100 pages in English. Many of the islanders can’t understand that. So they expect people will not object,” Bunyamin said.

People and politicians of the islands also stress on the fact that it is not a fight between Hindu ideology and the Muslim community as some in the media are projecting. They said that previous administrators appointed by the BJP government were good. They stressed on the fact that their fight is against the individual Praful Patel. “There is no communal element here. These amendments are his own decisions. Not that BJP government is acting against the Muslim community here. Patel has his own aims,” Bunyamin said.

Disclaimer: An assault on culture and nature: Why Lakshadweep is against Administrator Patel - Views expressed by writers in this section are their own and do not necessarily reflect Latheefarook.com point-of-view