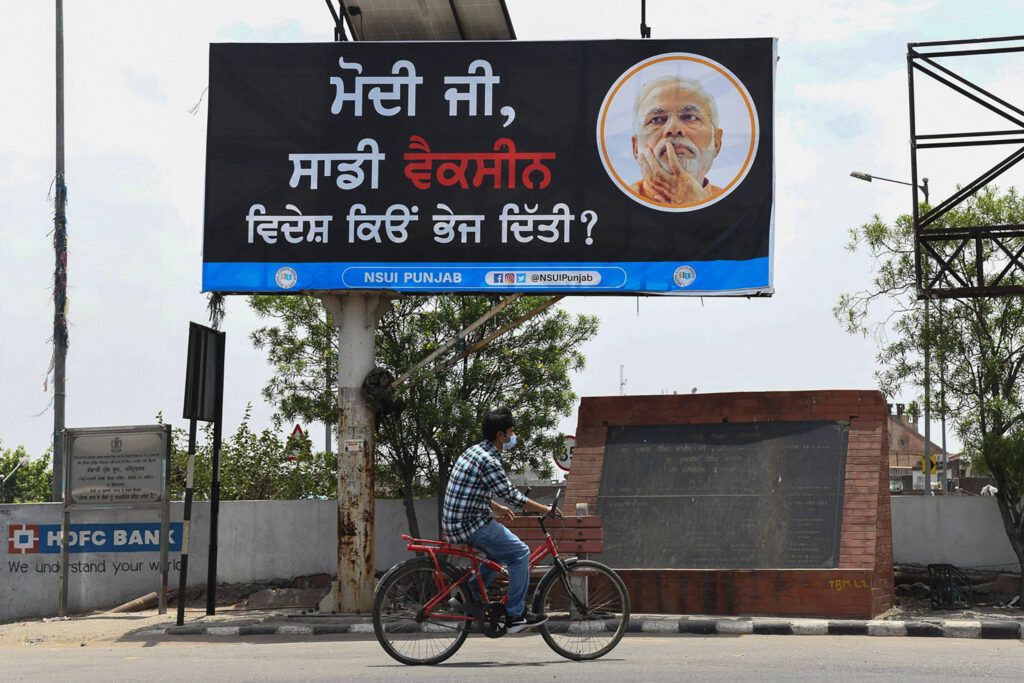 A cyclist rides past a billboard with a picture of Indian Prime Minister Narendra Modi and a message in Punjabi reading, “Mr Modi, why did you send our vaccines abroad?” in Amritsar this week. (Narinder Nanu/AFP/Getty Images

India set another coronavirus milestone this week. On Wednesday, authorities announced the country had recorded more than 4,500 deaths from covid-19 for the prior 24 hours, setting a world record.

That number of deaths — higher than the previous record of 4,400 set in the United States on Jan. 20 — comes as new cases appear to be declining in India, following days on end when new daily cases broke records in late April and early May, peaking at more than 414,000 on May 6.

As The Washington Post’s Joanna Slater reports from New Delhi, deaths from covid-19, the disease the virus causes, lag infections by several weeks. Despite the record number of deaths, there are some positive signs that India’s surge may be slowing, with less than 300,000 new daily cases this week. But there have been long-standing questions about the accuracy of the numbers recorded in India.

Even now, Slater writes, “in India’s vast hinterland, scores of people are dying with covid symptoms without being tested.” And amid this uncertainty, health experts on Wednesday debated among themselves what the rising number of recorded deaths actually meant.

Chandrakant Lahariya argued that the surge in new covid-19 deaths may be influenced by aggressive new attempts to rectify problems with the reporting of deaths. Many states were still lagging, the New Delhi-based health policy expert wrote on Twitter, meaning that India’s covid-19 deaths may remain high for a while.

Even as new daily cases fall in coming weeks, “new daily deaths may stay at very similar and narrow high flat curve, for a few weeks, before getting into a downward trend,” Lahariya wrote.

Those deaths will add to a huge toll. As it stands now, there have been well over 25 million recorded cases of the coronavirus among India’s 1.4 billion population. The official death toll stands at more than 283,000.

Other countries are expressing new concern over the variant that is widespread in India. On Tuesday, British scientists said that the variant, known as B.1.617.2, could quickly become the dominant strain in the United Kingdom if it is allowed to spread.

In technical papers designed to advise the government this week, scientists said that B.1.617.2 could be up to 50 percent more transmissible than another variant that had spread through Britain late last year and caused a major winter surge there.

British authorities say that while the number of cases of B.1.617.2 found within its borders remains small, mostly concentrated in northwest England and in London, it is growing. Health Secretary Matt Hancock told Parliament this week that confirmed cases had doubled in five days.

Sharon Peacock, director of the U.K.’s Covid-19 Genomics Consortium, told reporters that various measures, from travel bans to contact tracing, could buy some time. Even so, a fast-spreading variant such as B.1.617.2 would have “a biological passport for international travel and global spread” — meaning international spread was likely, perhaps inevitable.

That’s true already. In recent days, U.S. health experts have raised their concerns about the variant spreading here, while there have been documented cases in Germany, Singapore and elsewhere.

“It’s outcompeting the other viruses,” Jeremy Luban of the University of Massachusetts Medical School told NPR this week. “It’s replacing whatever variants were there before. And it’s always a concern when something like this changes because we don’t know what will happen.”

The World Health Organization this month labeled B.1.617, the lineage which includes B.1.617.2, a variant of global concern and suggested there were worrying signs that antibodies from vaccines or infections with other variants might not be quite as effective against this variant.

But vaccines remain the most potent weapon against this variant and others. On Wednesday, as India broke the daily death toll record, British officials said that they were confident the vaccines worked against the variant and that vaccinations would be at the center of the country’s fight against covid-19.

Britain must move to replace the “shield of restrictions with the sword of the vaccine program,” Hancock said at a briefing from 10 Downing Street, adding that there would be increased testing and surveillance in variant-hit areas, with new research into whether additional vaccine doses would boost protection.

In Britain, where one of the world’s fastest vaccine rollouts has pushed back a severe coronavirus outbreak, the spread of the variant has raised new doubts about the country’s plans for a full reopening in June. But it is in areas further back in the vaccination process where there are real worries.

Africa has accounted for a minuscule fraction of global vaccinations, for example. And India’s ongoing restrictions on vaccine exports have already created supply problems for Covax, the WHO-backed effort to share vaccines equitably, which announced this week it was short by more than 100 million doses.

On Tuesday, the Serum Institute of India — the world’s largest manufacturer of vaccines by volume — made an announcement that suggested it was unlikely to resume vaccine exports “to Covax and other countries” before the end of the year.

Wealthy nations are finally taking some action, with France pledging to share 5 percent of its doses with Covax through the year and the United States promising to share an additional 20 million of its own doses beyond the 60 million already pledged. But as my colleague Emily Rauhala has explained, these donations “represent just a fraction of what experts say is need to end the pandemic.”

The high stakes for slow action have been made clear in India. Despite the country’s strong tradition of manufacturing vaccines, it has been sluggish in getting out doses domestically. This, combined with government complacency and the loosening of restrictions, allowed B.1.617.2 and related variants to spread — killing thousands of Indians each day and threatening the rest of the world.

Disclaimer: As India sets a record for covid-19 deaths, variant worries grow globally By Adam Taylor - Views expressed by writers in this section are their own and do not necessarily reflect Latheefarook.com point-of-view