Skip to content
Bangladesh
Spread the love
Hashem Foods Ltd. factory on the outskirts of Dhaka, Bangladesh, July 9, 2021. © Reuters / Mohammad Ponir Hossain
New details of breaches of safety regulations and the suspected use of child labor have emerged as Bangladesh deals with the aftermath of its latest factory fire. At least 52 people died in a blaze at a food and drinks factory.

Police have detained eight people over the fire, which broke out on Thursday and raged for two days at a factory not far from the Bangladeshi capital, Dhaka. The owner of the factory, Abdul Hashem of Hashem Foods Ltd, and his four sons are among those arrested on charges of murder, AFP reported, citing police.

“It was a deliberate murder,” said Jayedul Alam, police chief for the Narayanganj district where the factory is located. A case has also been launched against the chairman of the factory’s parent company, Bangladesh’s multinational Sajeeb Group, according to local media.

Having battled the flames for two days, firefighters said they had discovered that several doors which should have allowed the workers to get to safety were padlocked. The exit door to the main staircase was locked, a fire services spokesman said, and one of the staircases leading to the rooftop was also closed, leaving workers trapped inside the burning building.

“The fire is everywhere, father. The gate is locked,” one of the factory’s senior operators said in a brief phone call from the burning building, local bdnews24 reported.

Claiming that multiple safety regulations were breached at the factory, fire service officials said that the building needed at least four to five emergency staircases, while only one was available. Nearly 200 workers were inside the factory when the fire erupted, an administrative officer told local media.

Most of the charred bodies were recovered from inside the factory, but several workers died jumping from the windows of the six-story building, desperate to escape. The bodies of those who died in the flames were burned so badly that DNA tests will be needed to identify them, police said. 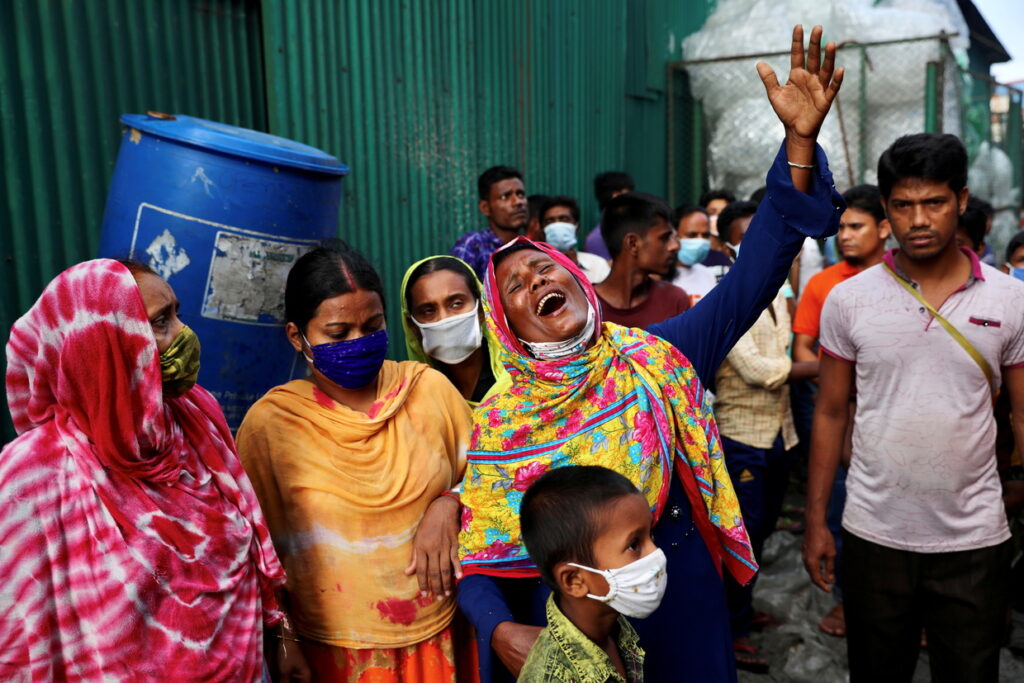 Relatives of the victims mourn at the site after a fire broke out at Hashem Foods Ltd. factory, July 9, 2021. © Reuters / Mohammad Ponir Hossain

Family members of those who worked at the factory have gathered near the building to protest and demand justice, while local activists have also spoken out, calling for a fair probe and compensation for the victims. “We demand speedy trial and punishment of those responsible for this tragic murder incident through a fair investigation,” the nonprofit Bangladesh Legal Aid and Services Trust said in a statement, as quoted by Reuters.

The owner of the factory has denied allegations that the building had faulty fire systems. A separate inquiry has been launched into working conditions at the factory, as reports of underage workers have emerged. Children as young as 11 years old might have been employed there, AFP reported, adding that the State Labor Ministry is now looking into the case.

Local media said 14-year-olds might have worked there, but also referred to factory authorities who claimed they may have deliberately given an older age at the time of recruitment. One of the fire victims, who was 16 years old, worked for a salary of Tk 5,000, equivalent to $60, bdnews24 reported, citing her family members.

The Hashem factory blaze might become one of the worst in Bangladesh’s grim record of industrial disasters, which are often the result of poor working and safety standards. The South Asian country, where millions are employed at factories, pledged to improve labor and safety conditions following the infamous Rana Plaza collapse — a 2013 accident in which a building that housed a garment factory crumbled, killing over 1,100 people.

However, a series of other disasters have occurred since then. In 2016, nearly 40 people died in a blaze at a food- and cigarette-packing factory in Dhaka. Last year, 70 people died in an apartment block inferno in the capital, while the deadliest Bangladeshi factory fire to date happened in 2012, killing at least 117. And just two weeks ago, at least seven people were killed and dozens injured as a building housing shops and a restaurant was reduced to rubble by an explosion in central Dhaka. A gas pipeline blast has been named as the likely cause.

Disclaimer: Bangladesh factory owner among those arrested after over 50 workers die locked inside inferno - Views expressed by writers in this section are their own and do not necessarily reflect Latheefarook.com point-of-view