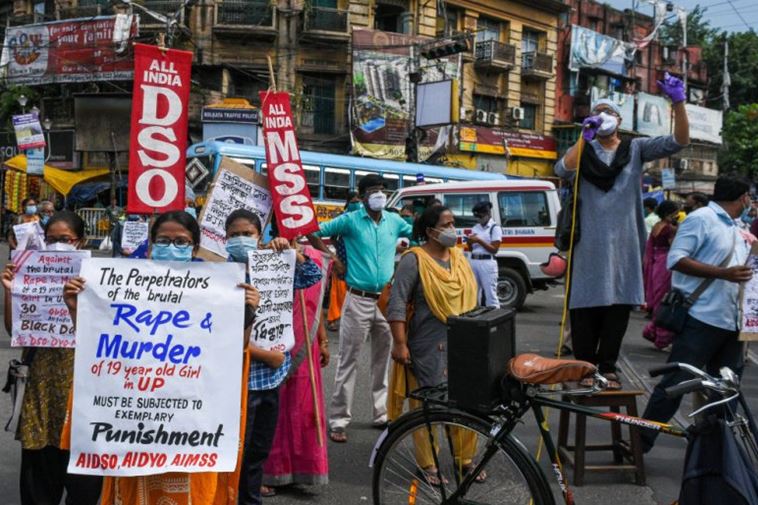 India has won the label of RAPIST and RAPE CAPITAL OF THE WORLD for quite some time now and not without a reason. Indian changing racist tendencies in society have brought Dalit women in its cross hairs.  Dalit women across swathes of rural India have faced sexual crimes for as long as anyone can remember. They continue to be stalked, harassed, abused, molested, raped and killed with impunity

Recently it was reported that a 19-year-old Dalit woman (the Dalits were once called “Untouchables”) was allegedly gang raped and assaulted by a group of upper caste men in Uttar Pradesh state again. The news shone the spotlight again on the rampant sexual violence faced by India’s 80 million Dalit women, who like their male counterparts languish at the bottom of India’s unbending and harsh caste hierarchy.

These women, who comprise about 16% of India’s female population, face a “triple burden” of gender bias, caste discrimination and economic deprivation. “The Dalit female belongs to the most oppressed group in the world,” says DrSurajYengde, author of Caste Matters. “She is a victim of the cultures, structures and institutions of oppression, both externally and internally. This manifests in perpetual violence against Dalit women.”

The aftermath of the recent rape and murder of a woman in Hathras, Uttar Pradesh, allegedly by upper caste men, played out the way it usually does when a Dalit woman is attacked: police are slow to register a complaint; investigations are tardy; officials raise doubts there was a rape; there are insinuations it had nothing to do with caste; and authorities appear, perhaps, to be complicit in siding with the upper caste perpetrators of violence. Even some of the media, from newsrooms dominated by upper caste journalists, question why sexual violence should be linked to caste.

In other words, the state and parts of society in India conspire to downplay or erase the links between sexual violence and the hierarchies of caste.

After the alleged rape in Hathras last week, the government of Uttar Pradesh, which is ruled by an upper caste politician belonging to the ruling BJP party, hastily cremated the victim in the middle of the night and briefly barred the media and opposition politicians from visiting the victim’s village and family, prompting suspicions of a cover up. In an unprecedented move, the government hired a private public relations agency to push its narrative that this was not an incident of rape.

In these regions, much of the land, resources and social power remain with the upper and middle castes. Despite a 1989 law to prevent atrocities against the community, there was no let-up in violence against Dalit women. They continue to be stalked, abused, molested, raped and murdered with impunity.

In a 2006 study of 500 Dalit women in four states across India on the forms of violence they had faced, 54% had been physically assaulted; 46% had been sexually harassed; 43% had faced domestic violence; 23% had been raped; and 62% had been verbally abused.

And Dalit women bear the brunt of violence of all castes, including their own. The Centre for Dalit Rights group examined 100 incidents of sexual violence against Dalit women and girls across 16 districts in India between 2004 and 2013. It found that 46% of the victims were aged below 18 and 85% were less than 30 years old. The perpetrators of the violence came from 36 different castes, including Dalit.

One of the reasons why the Dalits – especially women – bear the brunt of the violence is because they have begun to speak up.

The turning point in the history of violence against Dalit women in India was in 2006, when four members of a Dalit family – a woman, her 17-year-old daughter, and two sons – were brutally murdered by upper caste men after a protracted conflict over land. The incident in a remote village called Khairlanji in Maharashtra state began with the two women going to the police to file a complaint over a land dispute with upper castes in the village. “This gruesome incident stirred the conscience of Dalits and highlighted their social suffering and discrimination,” says historian Uma Chakravarti.

The upper castes have been rattled by increasing assertion by Dalits and have been striking back. In the Hathras case last week, reports suggest the family of the victim had a two-decade long dispute with an upper caste family.

Around the country, social transformations are sending Dalit girls to school and pushing Dalit women and feminist groups to make their voices heard. “Like never before, a solid Dalit women leadership is articulating its own grievances and leading the struggle without anyone else’s intervention,” says DrYengde.

Dalit women are fighting back. And the backlash appears to be more brutal than ever. “Earlier the violence was invisible and unreported,” says Manjula Pradeep, a leading Dalit rights activist. “Now we have visibility. Now we are stronger and more assertive. Much of the violence now is to remind us of our boundaries.”

In nut shell, state and parts of society are complicit in downplaying the crimes and attempting to de-link the sexual violence from caste hierarchies. Dalit women with a strength on approx. 80 million comprising 16% of Indian females are facing caste discrimination over and above gender crimes. As Dalit women have started to speak for themselves, the backlash from society keeps getting more brutal however they need to increase the impetus of the efforts to break free. World is waking up gradually to the fact of Indian society being repressive, caste stricken, criminally gender biased and brutal to all minorities.

Disclaimer: HathrasCase: Dalit women - Views expressed by writers in this section are their own and do not necessarily reflect Latheefarook.com point-of-view