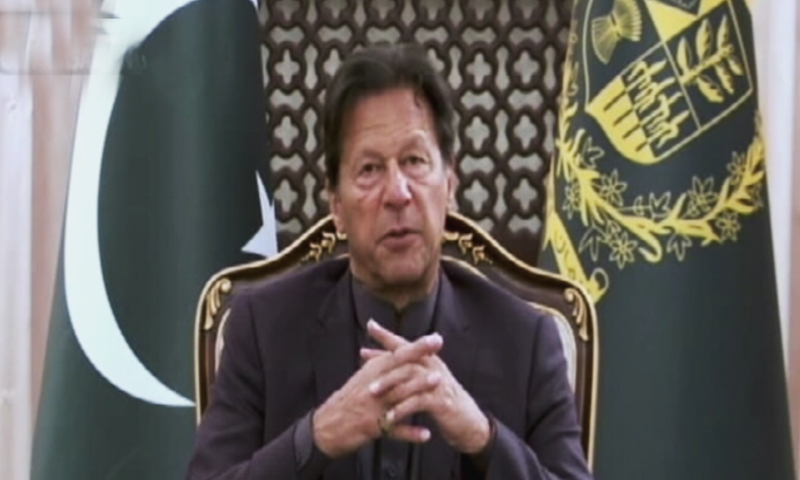 Prime Minister Imran Khan on Sunday said his government had reached the conclusion that India was backing the militant Islamic State (IS) group to cause turmoil in Pakistan.

In a conversation with a group of digital media publishers and broadcasters, the premier suggested that the IS extremist group had carried out last Sunday’s killing of Shia Hazara coal miners in Balochistan’s Mach area at the behest of India.

While answering a question about the Hazara murders, he said the genesis of militant sectarianism in Balochistan lay in the Afghan jihad of the 1980s.

After foreign powers left Afghanistan, the militant groups remaining in the region “caused immense losses to Pakistan”, particularly by targeting the Shia Hazara community, he noted.

“Now this [attack] that has been claimed by ISIS … the opinion of all of us [and] our security agencies is that India is backing ISIS,” the premier said, using the alternative name for IS. He added that it was the “stated aim” of Indian Prime Minister Narendra Modi’s government to spread unrest in Pakistan.

Prime Minister Imran said his government had been given an intelligence briefing in March last year that India wanted to “inflame sectarianism” in Pakistan by starting the killings of Shias and Sunnis.

“This was going on for a while. Full marks [to] our ISI and world-class agencies that pre-empted this,” he said, adding that security agencies had targeted such elements with great difficulty and diffused the situation.

He said sectarian groups had morphed into the IS, and regretted that successive federal governments had not paid enough attention to Balochistan because of its small vote bank.

The premier also attributed Balochistan’s problems to its sardari system, under which he said tribal leaders would enter into an alliance with federal governments; under this alliance, the development funds issued for Balochistan were spent through the sardars and did not reach the masses.

“So the people [in Balochistan] are poor but the sardars over a period of time have become very powerful,” he said.

Prime Minister Imran said his was the first government that was focusing on the socio-economic development of the province. He said the government had for the first time given a large development package for south Balochistan but acknowledged that “it is a large area for which a lot of funds are needed which we don’t have at the moment.”

Praising the performance of Balochistan Chief Minister Jam Kamal Khan Alyani, he said the government was making efforts to change the existing legacy harming the province.

The prime minister’s remarks come a week after 11 miners belonging to the Shia Hazara community were brutally massacred in the Mach coalfield area. Armed assailants had entered their residential compound early on January 3 where they were sleeping, blindfolded and trussed them up before executing them. The IS, also known by the Arabic acronym Daesh, claimed responsibility for the attack.

Relatives and residents started a protest against the killings on the same day, arranging the miners’ coffins on the Western Bypass on the outskirts of Quetta and refusing to bury them in a symbolic gesture until the prime minister’s visit and assurance of protection.

The protests later spread to other parts of the country, including Peshawar, Lahore and Karachi, where demonstrators blocked several important roads, disrupting traffic.

After a deadlock lasting for nearly a week, talks succeeded between the protesters and the government, leading to the end of the protests and burial of the miners on Saturday.

Disclaimer: India backing IS to spread unrest in Pakistan: PM Imran on Hazara killings - Views expressed by writers in this section are their own and do not necessarily reflect Latheefarook.com point-of-view