Modi’s government had a choice between saving lives and saving face. It has chosen the latter 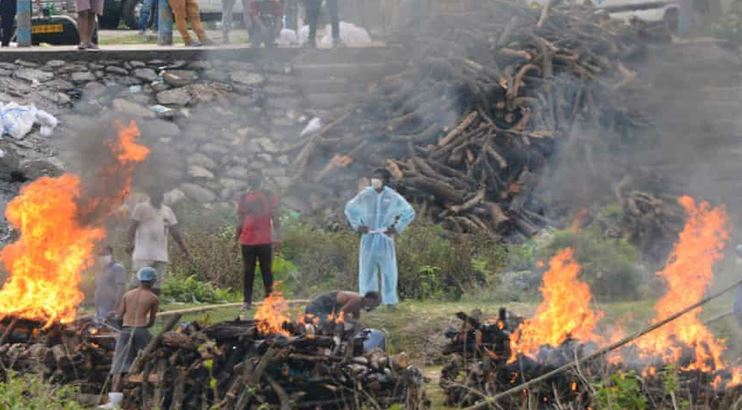 Workers cremate people who have died of Covid-19 at a crematorium outside Siliguri on Tuesday. Epidemiologists believe the country’s reported death toll is only a fraction of the true figure. Photograph: AFP/Getty Images

A few years ago, as Narendra Modi came into power, I worked on an investigative report about India hiding its malaria deaths. In traveling from tribal Odisha to the Indian national health ministry in New Delhi, my colleague and I watched thousands of cases disappear: some malaria deaths, first noted in handwritten local health ledgers, never appeared in central government reports; other malaria deaths were magically transformed into deaths of heart attack or fever. The discrepancy was massive: India reported 561 malaria deaths that year. Experts predicted the actual number was as high as 200,000.

Now, with Covid ravaging the country, desperate Indians have taken to Twitter to ask for oxygen cylinders or beg hospitals for an open bed. The crisis has been exacerbated by the government’s concealment of critical information. Between India’s long history of hiding and undercounting illness deaths and its much more recent history of restraining and suppressing the press, Modi’s administration has made it impossible to find accurate information about the virus’s hold in the country. Blocking that information will only hurt millions within the country. It will also stymie global efforts to stop the Covid-19 pandemic, and new variants of the virus, at India’s border.

Epidemiologists in India and abroad estimate that the country’s official reported Covid-19 death toll – around 222,000 at time of publication – accounts for only a fraction of the real number. The director of the US-based Institute of Health Metrics and Evaluation has estimated that India is only detecting 3-4% of actual cases. Other experts point to total excess deaths in cities such as Mumbai as proof that there could be 60% to 70% more deaths from Covid-19 than the government is admitting to.

There are various reasons India could be cooking the books on Covid deaths. For one, the utter failure of the public health system makes it difficult to account for the millions of bodies passing through hospitals, clinics and those dying in their own home. Despite having become one of the largest economies in the world, Indian state and federal governments spend a dismal amount on healthcare, with an investment of less than 1% of its GDP, one of the lowest rates in the world.

But systemic failure is only one part of the puzzle. The reigning party of the Indian government touted its success in curbing the virus very early in the pandemic, and has never let go of that narrative. As bodies burned in funeral pyres across Uttar Pradesh in April, Yogi Adityanath – the state’s chief minister and a key Modi lackey – claimed that everything was under control and repeatedly refused to announce new lockdown measures, even as he himself contracted Covid-19.

This denialist rhetoric is occurring at almost every level. Like India’s see-no-evil approach to malaria or tuberculosis, its Covid obfuscation suppresses “bad news” in order to buoy the country’s international image and the government party’s domestic standing. Not all countries with struggling health systems do this. Some actually at times overcount deaths from other viruses in order to get more humanitarian aid. But undercounting disease is, in many ways, far more sinister. Modi’s government had a choice between saving face and saving lives, and has chosen mass death.

While undercounting disease is a longstanding problem in India, the assault on press freedom is far more recent. Since Modi came into power in 2015, the freedom of India’s expansive media culture has dramatically shrunk, according to sources including Reporters Without Borders. In the last few years, the government has sued or prosecuted several news organizations and journalists, citing defamation or other even more dubious rationales. Controversial laws such as the 2000 Information Technology Act allow for what seem like increasingly frequent, and grossly arbitrary and politically motivated, crackdowns on freedom of speech and press.

Indian journalists tell me they are often asked to self-censor their reporting on the Covid-19 pandemic, as well as what they say on social media, for fear of inciting the ire of the government. Many were understandably incensed last week when the Indian central government reportedly made Twitter and Facebook remove posts critical of the government’s Covid measures. Meanwhile, India continues to be one of the most dangerous places in the world for journalists to work, and more than 165 journalists have allegedly died of Covid-19 while covering the crisis itself. (Last month Kakoli Bhattacharya, an Indian journalist who worked as a news assistant for the Guardian, died of Covid.) In the absence of trustworthy Covid information from their own government, Indians are mostly reliant on social media and foreign reporting for the story of what’s actually happening.

The result is a public health nightmare for India – and also, I fear, for the global community, which, just as many countries are breathing a sigh of relief, could face another Covid wave that includes new variants. We can learn from other epidemics what that might look like: India was one of the last countries to eradicate polio, and is one of 15 countries that still have a significant number of people with leprosy. India also has the third largest HIV/Aids epidemic in the world. India’s struggles with diseases that have been eradicated or largely ameliorated elsewhere leaves a backdoor for global public health threats and costs billions of dollars in disease burden. These health crises also harm international travel, trade and other economic indicators, creating new challenges not only for India but for its allies, as well.

India likes to tout itself as the world’s largest democracy – and use that moral authority to protect its standing in the global economy and the international diplomatic community. But with a dark curtain separating the reality of the country’s Covid-19 crisis from the rest of the world, India’s standing and authority are at risk. If the country continues to choose political expediency over transparency in the days to come, the people of India, scrambling to protect their families, are the first victims, but far from the last.

Disclaimer: India is hiding its Covid crisis – and the whole world will suffer for it Ankita Rao - Views expressed by writers in this section are their own and do not necessarily reflect Latheefarook.com point-of-view