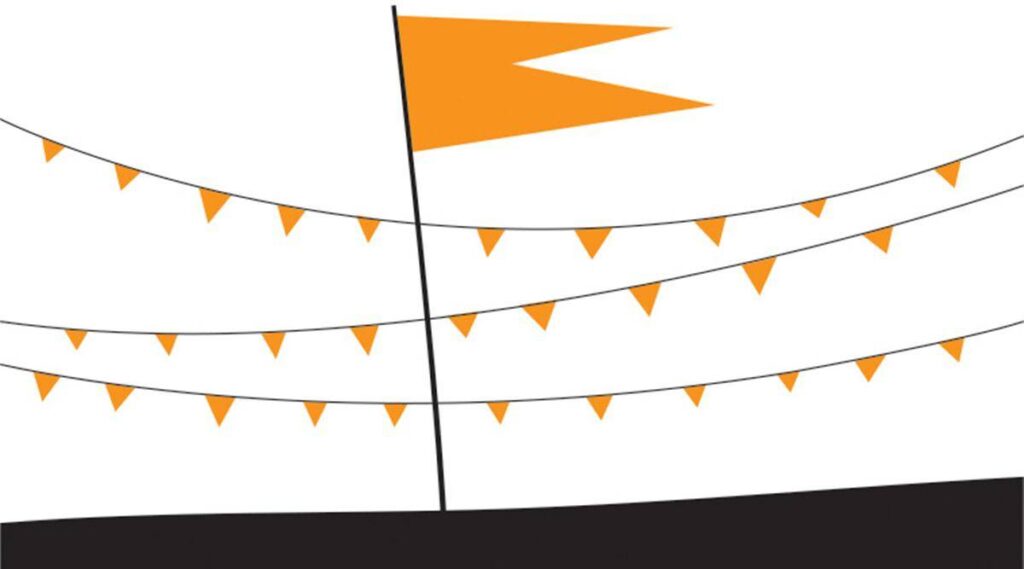 Over several decades and generations, as we see in Gujarat today, such a political and legislative system produces cities that are very starkly segregated on communal lines. (Illustration by C R Sasikumar)

On May 28, 2021, 11 houses in close proximity to the Gorakhnath Temple in Gorakhpur were proposed to be acquired by the Uttar Pradesh Government citing reasons of security. Later reporting revealed that most of the residents had signed their consent on the proposal under pressure and fear from the state apparatus. These houses have been occupied by Muslim families for nearly a century and it is important for us to reflect on the fact that exclusively Muslim households were shortlisted for the construction of security posts and other facilities in the area.

Alarming as it is, the incident in Gorakhpur is a small scale example of similar strategies of homogenising urban neighbourhoods on communal lines that the government has been implementing in many other cities and states across the country. An imagined threat to law and order and safety of the inhabitant of these areas always fronts these strategies as their rationale.

Take for example the election rhetoric in Assam. Page 13 of the BJP’s manifesto for the assembly elections in Assam featured their promise to enact “appropriate laws” to curb “the menace of love jihad and land jihad” in the state. Although it is granted only three lines in the entire manifesto, the issue of “land jihad” was featured prominently in the Union home minister Amit Shah’s speech on March 26 in Guwahati. The party emerged victorious in the polls, and therefore, these laws are likely to be formulated and implemented.

“Land jihad” is a conspiracy theory in the Hindutva narrative that claims that Muslims are waging a religious war on Hindus by buying real estate in Hindu majority areas with the aim of dominating the neighbourhoods and gradually executing a Hindu exodus. Just like the rhetoric that created legitimacy for the “love jihad” law preceded the legislation in Uttar Pradesh, the rhetoric around “land jihad” gained pace in BJP’s election campaign in Assam. More importantly, just like there are no records or legal definitions of “love jihad”, the “menace of land jihad” also remains undefined and unrecorded and targets consensual real estate transactions between individuals.While we have seen in Uttar Pradesh what a law against “love jihad” looks like, it remains unclear what would a law against “land jihad” seek to achieve and how will it try to do that? If, however, we want to understand what kind of laws work the narrative of “land jihad” in our cities, we must look at Gujarat.

Gujarat has unique legislation concerning the buying and selling of real estate in its cities. The legislation is called The Disturbed Areas Act, 1991, and restricts the exchange of real estate between people of two different religious communities. In the areas declared as “disturbed”, the exchange can only take place if an application for the same is approved by the district collector.

In Ahmedabad alone, over 750 areas are covered under the Disturbed Areas Act, 1991. Later amendments in the Act have made it much easier for the district collector to declare an area as “disturbed”. The amendments state that an area can now be declared “disturbed” on the basis of just a “possibility” of communal riot or polarisation (‘What has changed in Gujarat’s Disturbed Areas Act’, IE, October 19, 2020).

The Act — in its vague language — is widely used to prevent Muslims from buying properties in “Hindu dominated” parts of a city, thereby segregating neighbourhoods. It is also a tool of communal politics. For example, Sangita Patil, the MLA candidate in Gujarat Assembly Elections, 2017, promised her voters to get her constituency of Limbayat declared as “disturbed”. Upon winning the seat, she fulfilled the rather ironic promise and the area was declared “disturbed” in October 2017 in order to “…stop them (Muslims) from spreading into Hindu areas”. Similar impositions were done in posh neighbourhoods of Rajkot in January 2021, and in some cases, like that of Bhayli in Vadodara, residents themselves demanded that their area be categorised as “disturbed” after some Muslim families were allotted houses in Bhayli under the Pradhan Mantri Awas Yojana. The coming of Muslims in Bhayli was seen as a disturbance in the “peace-loving Hindu neighbourhood” (‘Residents demand Bhayli under Disturbed Areas Act, threaten to boycott polls’, IE, February 13, 2021).

The characterisation of minorities as the unwanted other forms the socio-political space that allows for legislations like the Disturbed Areas Act to operate. And in most instances, we see the narrative of “land jihad” — an unverified, undefined and unrecorded problem — as an integral part of the rhetoric. We see this in the manifesto of BJP and in Amit Shah’s aforementioned speech in Assam as well.

The promise to enact laws against land jihad features under the heading “Protection of Civilisation in Assam”. As the suffix implies “land jihad” is allegedly executed by Muslims and therefore, the “civilisation” of Assam needs protection from Muslims buying real estate. It also implies that it is the Hindu population of the state that has the first right over the land and Muslims buying land in an area of their choice is a religious war waged by an illegitimate outsider.

Amit Shah also accused Badruddin Ajmal, the leader of All India United Democratic Front (AIUDF), of “changing the identity of Assam through land jihad” again implying that the identity of Assam is not inclusive of Muslims and Muslims buying land in Assam morphs its identity into something that it is inherently not. In this context, the Union home minister also used the word “infiltrator” to refer to the perpetrators of “land jihad”, further characterising the minorities as unwanted others.

Over several decades and generations, as we see in Gujarat today, such a political and legislative system produces cities that are very starkly segregated on communal lines. Polarisation of the people through hate speech, riots and propaganda provides the social consent to create and operate communal legislations in the city. As legislations legalise communal identity as the qualifier of the right to live in certain areas of a city, the divide is executed into the built form — in neighbourhoods, roads, apartment buildings and even government housing — preventing people from living in diverse neighbourhoods and reducing the interaction between communities to a minimum while also denying minorities the right to buy properties in the neighbourhoods of their aspirations.

What we do not know, we fear, and increased segregation, followed by reduced interaction and lack of familiarity, perpetuate and promote communal stereotypes. The dirty other — created through propaganda and political hate speech — is reinforced and the built environment — now segregated — creates a more expansive space to incorporate and sustain legislations like the Disturbed Areas Act, 1991, and potential legislations like the one the BJP has promised to enact in Assam.

Socio-political rhetoric creates polarised cities through legislation and polarised segregated cities further contribute towards divisive politics. Intolerance is created and sustained through a form of structural violence that gradually produces geographies of alienation and segregation.

Recent developments in Gorakhpur, the BJP’s manifesto in Assam and the political rhetoric of “land jihad” in the election campaign imply that the party intends to export the aforementioned politics of the built form from Gujarat to other states of the country where it sees the opportunity to translate the politics of Hindutva into an urbanity of hate.

Zuberi is an academic and writes about politics, culture, architecture and city studies

Disclaimer: How Hindutva works to create an urbanity of hate by Fahad Zuberi - Views expressed by writers in this section are their own and do not necessarily reflect Latheefarook.com point-of-view