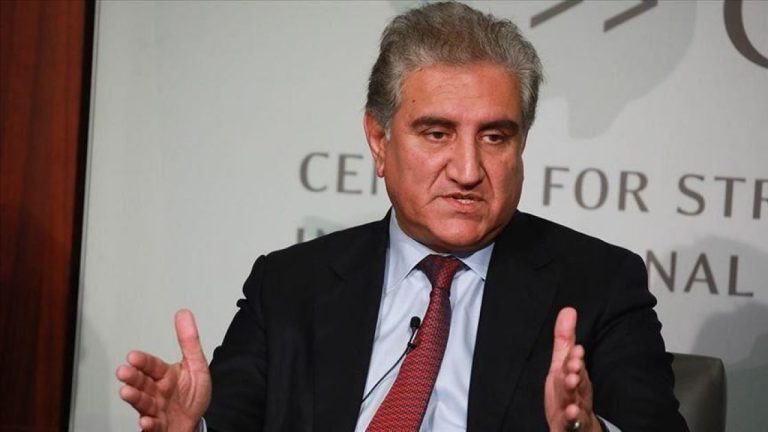 Islamabad, June 19 (KMS): Pakistan’s Foreign Minister Makhdoom Shah Mahmood Qureshi has forewarned the international community stating that India must refrain from taking any further illegal steps in the Indian Illegally Occupied Jammu and Kashmir (IIOJK), after already violating the international law and the UNSC resolutions through its illegal and unilateral actions of August 5, 2019.

This has been stated in a  press release issued  by Pakistan’s Foreign Office in Islamabad today. It reads as follows:

The Foreign Minister stressed that Pakistan had resolutely opposed India’s actions of 5 August 2019 and taken up the issue at all international fora, including the UN Security Council. He reiterated Pakistan’s firm resolve to oppose any Indian moves that sought to divide and bifurcate IIOJK to change the demographic structure of the occupied territory, further dilute the distinct identity of the Kashmiris, and perpetuate Indian occupation of IIOJK. He noted that he had, as a forewarning, apprised the President of the Security Council and the UN Secretary General about India’s possible moves.

Foreign Minister stated that India had failed to suppress the Kashmiris’ demand for freedom and impose its rule by force on the people of the occupied territory despite mounting a massive campaign of repression including gross and systematic violations of human rights – conducted with impunity by an occupation force of over 900,000 troops.

Referring to the illegal domicile rules and land laws introduced by India in IIOJK, which were aimed at converting Kashmiris into a minority in their own land, the Foreign Minister underscored that such Indian actions to impose a new demographic reality on IIOJK were a clear violation of international law including the UN Charter, relevant UN Security Council resolutions and the 4th Geneva Convention.

The Foreign Minister declared that these measures have been vocally and vigorously rejected by the people of Jammu and Kashmir and by the Government and people of Pakistan.

Foreign Minister Qureshi called upon the international community, especially the members of the UN Security Council, to stop India from doubling down on its illegal actions in IIOJK and avoid imperilling the already volatile peace and security situation in South Asia.

The Foreign Minister underlined that durable peace in South Asia can only be achieved by peacefully resolving the Jammu and Kashmir dispute in accordance with the relevant UNSC resolutions and the wishes of the Kashmiri people.

Disclaimer: Qureshi forewarns world on Indian illegal actions in IIOJK - Views expressed by writers in this section are their own and do not necessarily reflect Latheefarook.com point-of-view