Why Hindu nationalists have found a brother in arms in Israel and supported recent Israeli escalation in Gaza, which killed 253 Palestinians, 66 of whom are children 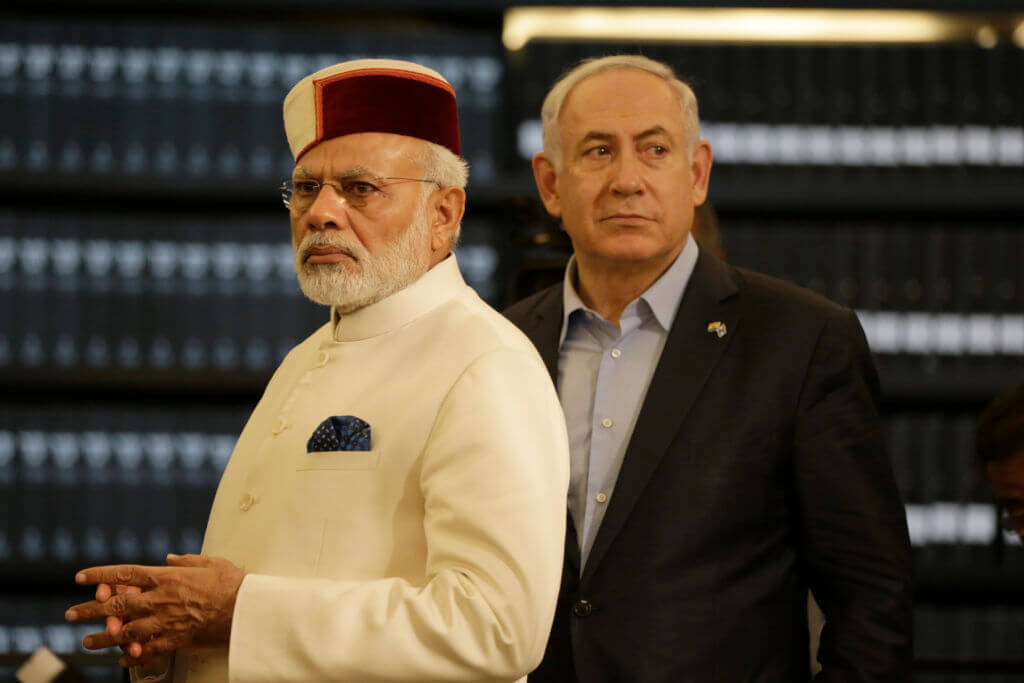 When Israeli warplanes, artillery positions and armed drones rained missiles and bombs upon Gaza for 11 consecutive days last month, killing 253 Palestinians, 66 of whom were children, the Israeli Government received predictable support from the United States, but the words of solidarity it received from India has raised eyebrows around the world.

Whereas Congressional Republicans and Democrats in the U.S. offered boilerplate talking points in defense of Israeli military aggression against a largely defenseless civilian population, members of India’s ruling party – Bharatiya Janata Party (BJP) – and its allies unabashedly pontificated their solidarity with the self-proclaimed Jewish state on social media.

For more than a week, the hashtags #IndiaWithIsrael, “#ISupportIsrael, #IndiaStandsWithIsrael and #PalestineTerrorists were the top trending topics on Twitter in India, demonstrating widespread popular support for the Israel and its heavy-handed military response to Palestinian resistance.

Indian journalist Rana Ayyub reviewed tweets posted under these hashtags and found that “a common thread that runs through is a visceral hatred for Muslims and a bloodlust to see Muslims massacred and shown their place,” adding, “Most handles followed by one or more BJP minister or the PM himself.”

These tweets echoed pronouncements made by members of Prime Minister Narendra Modi’s Government, including Member of Parliament Tejasyi Surya, who posted on Twitter, “We are with you. Stay strong, Israel,” and a BJP spokesperson, Guarav Goel, who posted, “Dear Israelis, you are not alone, we Indians stand strongly with you.”

These expressions of solidarity with Israel by members of India’s ruling party and its supporters make it easy to forget that the Indian relationship with Israel has been anything but close or even cordial, with previous Indian administrations expressing hostility towards Israel for its persecution of the Palestinian people and occupation of the Palestinian Territories.

“Palestine belongs to the Arabs in the same sense that England belongs to the English or France to the French,” Mahatma Gandhi wrote in 1938. A decade later India would become one of only 13 countries to vote against the United Nations Partition Plan, which divided historic Palestine into two separate states – thus forming the foundation of the Israeli state in 1948.

India also voted for a UN resolution that condemned Zionism as “a form of racism and racial discrimination,” stating, “The racist regime in occupied Palestine and the racist regime in Zimbabwe and South Africa have a common imperialist origin, forming a whole and having the same racist structure and being organically linked in their policy aimed at repression of the dignity and integrity of the human being.”

India’s Cold War alliance with the Soviet Union also made it a natural opponent of the United States’ geopolitical orbit, while its large Muslim population helped the country maintain close ties with the Arab world, particularly the Palestinians – but when the Communist superpower collapsed in 1991, New Delhi hit the reset button on its relationship with Tel Aviv.

A natural thawing of relations between the two former British ruled colonies has blossomed into a full blown “special friendship,” with many likening the bond between Israeli Prime Minister Benjamin Netanyahu and Modi as a full blown “bromance,” one that oversaw a record $1.5 billion arms deal in 2016, making Israel the second-largest weapons exporter to the Indian state. Bilateral trade between the two countries has ballooned from $200 million in the early 1990s to nearly $6 billion today.

This fledgling Modi-Netanyahu “bromance” is not only driven by trade deals, but also by shared values, as both Hindu nationalism and Zionism draw from the same spring of hate – ethno-nationalist ideologies. Whereas Hindu nationalists seek to transform India into a Hindu Rashtra (nation), one absent non-Hindu religious minorities, but particularly Muslims, Zionism aims to cleanse the Palestinian Territories of non-Jews, but particularly Muslims.

At the core of the Modi Government’s ideological DNA is the militant Hindu organization Rashtriya Swayamsevak Sangh (RSS), which has long admired Israel’s brutality of the Palestinian people. RSS chief Mohan Bhagwat gave voice to this sentiment when he said in 2016, “Israel was attacked by surrounding Islamic countries on five occasions, but the Israeli people repulsed their aggressions and extended their boundaries due to strong resolve to save motherland.”

Somdeep Sen, an associate professor of international development studies at Roskilde University in Denmark, accurately observes, “The electoral successes of the BJP have meant that what was once a fringe Hindu nationalist love affair with Israel has now become a matter of public policy.”

It’s no surprise then that India has modelled its settler-colonial-project in Kashmir on Israel’s settler enterprise in the Palestinian Territories by turning military outposts into settlements, and settlements into bona fide towns and even small cities. In both projects, the occupying force rules over a restive Muslim majority population, and it’s for this reason India has turned to Israel for its supply of occupation management tools and strategies.

Disclaimer: Zionism and Hindu Nationalism Bring Israel and India Together - Views expressed by writers in this section are their own and do not necessarily reflect Latheefarook.com point-of-view