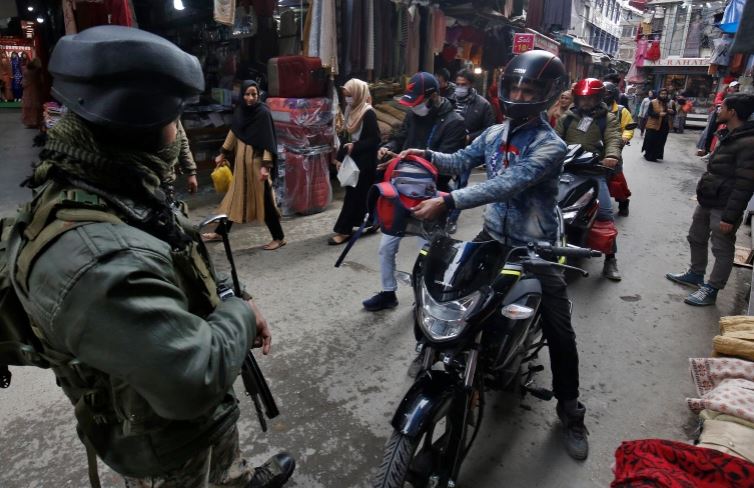 In April and May, as India experienced a massive surge in coronavirus cases due to the Indian government’s criminal mismanagement of the COVID-19 response, the news from Indian-administered Kashmir was disturbing. The highly militarised region, which had already suffered a debilitating lockdown before the pandemic started, was struggling.

Reported infections and deaths were breaking grim records each day as Kashmir’s healthcare system was overwhelmed by thousands of new cases. The public health response was crippled by inadequate equipment and staffing of medical facilities.

Hospitals in the region have an intensive care capacity of 450 units for a population of 12.5 million – or one ICU bed for every 27,000 residents. In one district in northern Kashmir which is home to 400,000 people, there are six ventilators available that could not be used during the surge of patients, as there was an acute shortage of trained medical staff.

In Kashmir, one doctor is employed for every 3,866 people, way below the average for India of 1 to 2,000. By contrast, the region has no shortage of military infrastructure and personnel. Known as the world’s most intensely militarised zone, it hosts one Indian soldier for every 14 residents.

Kashmir also lost people due to the shortage of oxygen – something the government continues to deny. During the surge, one just had to open social media to see the shocking scale of shortages of oxygen, hospital beds and medicines. The desperate pleas of people trying to save their loved ones were heart-breaking. Yet the government continued to insist that everything was under control.

Worse still, it was New Delhi’s triumphalist projections of normalcy in Kashmir taking precedence over people’s health that helped trigger the coronavirus surge in the region. In early April, when the second wave of coronavirus was already under way, the Indian authorities in Kashmir organised crowded cultural festivals and encouraged unregulated tourism from India and elsewhere.

With no proper testing or quarantine regime in place, more lethal variants of the virus slid into Kashmir. According to local doctors, these new variants were more transmissible and intensified the severity of the disease. Consequently, by early May, Kashmir recorded a 700-percent increase in the number of active coronavirus cases.

A lockdown was swiftly announced but, in a militarised space such as Kashmir, it resembled more of a siege, with roads and intersections blocked by barbed wire, armoured vehicles and paramilitary personnel. Doctors, paramedics and journalists reported being assaulted at these roadblocks.

This was the third lockdown Kashmiris had to suffer through in the past two years. The first one, which started in August 2019, after New Delhi revoked the region’s special status against the will of its people, lasted six months. A curfew was imposed, internet and mobile phone access were cut off, businesses were forced to close, schools and universities suspended classes, and life came to a complete halt under the full control of the Indian army. Shortly after some of these restrictions started to be relaxed, COVID-19 hit the country and another lockdown was imposed.

These three lockdowns have devastated the local economy. In just the past year, according to estimates by business groups, Kashmir’s economy has lost about $5.5bn. Another $2.4bn was lost during the 2019 lockdown, which eroded the Kashmiri people’s economic resilience and their ability to cope with the subsequent COVID-19 lockdowns.

A social support culture of local non-governmental organisations and volunteers, however, remains robust and was able to mobilise to provide medical and economic assistance to people. They had to work in a rather hostile environment where Indian authorities created various barriers to stem their efforts. For example, in early May the local government issued an order banning the supply of medical oxygen to NGOs, which made the work of volunteers trying to help patients who could not breathe extremely difficult.

Keeping people well-informed about the pandemic was also a major challenge in Kashmir. This was because Kashmiri doctors were banned from speaking to the media and people had to rely solely on information issued by the local authorities, whose reliability in some cases was questionable. On top of that, internet shutdowns in some areas of Kashmir continued during the coronavirus surge, hindering access for some Kashmiris and Kashmiri medical professionals to up-to-date information on COVID-19-related research.

Having no internet access also prevented some Kashmiris from registering in the national vaccination system. Lack of access to the online portal is one of several problems that have plagued the vaccination campaign in Kashmir, the massive shortage of vaccines being another one.

As of mid-May, 2.8 million jabs had been administered in the region, but a great number of those did not go to civilians. Priority was given to security forces and the police, most of whom had received two doses by then.

Many in Kashmir also worried about the thousands of Kashmiri political prisoners held in Indian jails in horrendous conditions. As the pandemic ripped through state prisons with increased intensity, the Indian government did not announce any plans to release political detainees.

Due to censorship, it is hard to estimate how many prisoners have been infected by the virus, but some tragic cases have already surfaced. In early May, 78-year-old Ashraf Sehrai, a popular political leader, died in prison. His family maintains that he was ill with COVID-19 for some time and was denied proper medical care.

For those Kashmiris who survived the COVID-19 surge and the latest lockdown, the future, however, also looks bleak. Having learned nothing from the superspreader events it allowed in the spring, the Indian government now plans to conduct the annual Amarnath Yatra pilgrimage from June to August. The event draws more than half a million Hindu pilgrims to ecologically fragile, remote areas in Kashmir.

To provide security, the Indian government will also mobilise tens of thousands of troops and station them in residential areas along the routes leading to the destination of this pilgrimage. This influx of masses of people will undoubtedly put the local population at risk of yet another surge in infections.

Kashmir would have to face that new COVID-19 wave with the same inadequately equipped and short-staffed hospitals and with the same shortages of oxygen and medicines. Kashmiris would likely have to go through yet another debilitating militarised lockdown that would push them even closer to the edge.

Disclaimer: Kashmir: Surviving COVID-19 under the military boot by Umar Lateef Misgar - Views expressed by writers in this section are their own and do not necessarily reflect Latheefarook.com point-of-view