The world may be working with each other, but it is not working for Modi in the realm of foreign policy. 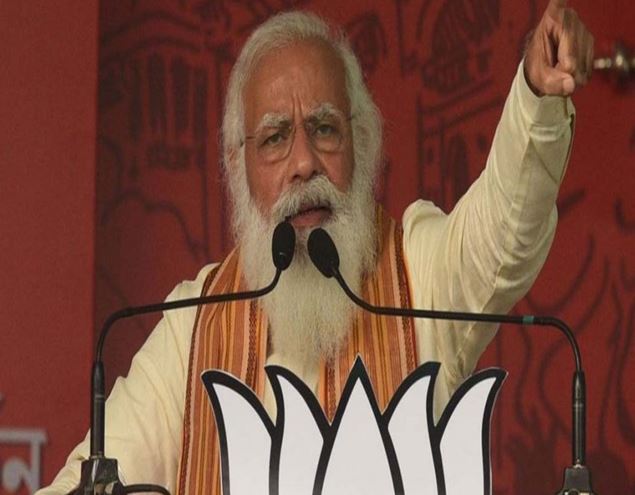 Prime Minister Narendra Modi’s mishandling of the deadly coronavirus pandemic is an “embarrassing” setback for India, leaving “in tatters” his hyper-nationalistic domestic agenda that includes the ambition of making the country a “Vishwaguru” (or master to the world), according to an article in Foreign Policy, a prestigious American magazine.

In the article, entitled ‘The End of Modi’s Global Dreams’, Sushant Singh, a senior fellow with the Centre for Policy Research in India, said after consistently campaigning on “virulent nationalism” and self-reliance, Modi took a U-turn by accepting help from 40 nations to deal with the pandemic’s second wave.

“The world may be working with each other, but it is not working for Modi in the realm of foreign policy,” the Indian scholar wrote, adding that India will have to work harder to justify its role in the Quadrilateral Security Dialogue (Quad), the US-led alliance aimed at countering China.

“China has redoubled its efforts in India’s neighbourhood since the second wave began, strengthening its existing ties with South Asian countries and contrasting its strength and reliability with India’s limitations,” Sushant Singh said.

The mishandling of the pandemic, he said, has dealt India a weaker hand in ongoing back channel talks with Pakistan and border negotiations with China. “But even longer-lasting damage has been done to India’s soft power, which was already dented under Modi’s authoritarian regime.”

The Indian scholar wrote, “Front page images and video clips of constantly burning pyres and dying patients may recede from the foreground with time, but rebuilding India’s diplomatic heft and geopolitical prominence will need more than the passage of months and years. It will take a concerted effort, and S Jaishankar, Modi’s chosen man to be India’s foreign minister, has so far appeared unequal to the task.

“In March, when the second wave of the pandemic started unfolding in India, Jaishankar’s ministry was busy issuing official statements and organizing social media storms against popstar Rihanna and climate change activist Greta Thunberg. On Thursday, at the peak of the health crisis, Jaishankar’s focus in a meeting with all the Indian ambassadors to various global capitals was on countering the so-called ‘one-sided’ narrative in international media, which said Modi’s government had failed the country by its “incompetent” handling of the second pandemic wave.

“Until recently, Jaishankar was also the most enthusiastic promoter of the government’s Vaccine Maitri (or “Vaccine Friendship”) programme, under which New Delhi supplied around 66.4 million doses of the India-made AstraZeneca vaccine to 95 countries in packing boxes marked prominently with large pictures of Modi. These vaccines were either commercially contracted, given as bilateral grants, or transferred under the World Health Organization’s COVID-19 Vaccines Global Access (COVAX) scheme for poorer countries.

“Meanwhile, India’s own vaccination rollout has been dismal. Around 2 percent of Indians have been fully vaccinated, despite the country being the world’s biggest vaccine manufacturer—a misstep that has emerged as one of the key culprits for India’s uncontrolled second wave.

“Having exported doses in a quest for personal glory, Modi is now awaiting 20 million doses of AstraZeneca vaccines from the United States after abruptly reversing 16 years of policy, as indicated in its disaster management documents, against accepting bilateral aid.

“It is bad enough that India is getting help from traditional partners like the United States and Russia, but it is also accepting supplies coming from China, with which India’s relationship has been increasingly strained under Modi. And it must have been particularly galling to the prime minister that even Pakistan made an offer to help with medical supplies and equipment. So woeful is India’s situation that it has started importing 88,000 pounds of medical oxygen daily from the tiny Himalayan kingdom of Bhutan.

“Most Indians acknowledge their country was in an economic recession last year, and accepting bilateral aid is more of a compulsion than a choice. But how will they reconcile that with the fact that work on a $2 billion project to reconstruct a government office complex in the national capital, including building a new residence for Modi, continues unabated as an “essential service” during the pandemic?

“Modi boasted of having made India a Vishwaguru and personally enhancing national prestige through his numerous global trips. His ultra-nationalist supporters had started assuming India was already a global power in the same league as the United States and China. This feeling tied in with his domestic political positioning. Hindutva, or homogenized Hindu nationalism, was offered as the ideology that had made this supremacy possible.

“But now Modi’s supporters find their dreams of a global power shattered. They must instead confront the harsh reality of being citizens of a so-called ‘third world country,’ which is dependent once again on the largesse of others. As the Indian economy continues to be hammered by the pandemic, there is little Modi can offer economically to his base. The edifice of nationalist pride, prestige, and global respect built by Modi on his so-called foreign-policy prowess has been demolished by the pandemic…

Sushant Singh noted that that in the race between the two Asian giants (China and India) to be an attractive and reliable partner in South Asia, India seems to have finished behind China.

“A similar impact will be felt during New Delhi’s ongoing back channel talks with Islamabad, where Pakistan will likely try to take full advantage of any chinks in India’s armour. India cannot afford to walk away from those talks as it has already been forced to engage with Islamabad due to its own inability to handle a two-front threat from China and Pakistan. An economy and a country ravaged by the pandemic makes the dual threat an even more challenging proposition for India—and hands Pakistan an unexpected advantage in the talks,” the Indian scholar wrote.

“Although Indian diplomats may still be able to contain negotiation damages with Beijing and Islamabad, they can do little to undo damage to the country’s soft power.

“India’s reputation as a liberal democracy had already been dented, but the country’s ability to manage all its internal contradictions was still seen as worthy of emulation by the developing world. Now, with its bungled response to the second wave and canceling vaccines committed to other countries in Asia and Africa—an allocation they were banking on, it will be hard to recover.

‘Indians are currently dealing with a humanitarian catastrophe of Modi’s making. New Delhi’s ambitions to be a global power have been dealt a blow. Under Modi, Jaishankar once boasted, diplomacy ‘is having many balls up in the air at the same time and displaying the confidence and dexterity to drop none.’ Now that all the balls are lying on the floor, the country will need humility, honesty, and extraordinary effort to pick them up and start again.”

Disclaimer: Modi’s dream to make India a global power shattered: US magazine ByNews Desk - Views expressed by writers in this section are their own and do not necessarily reflect Latheefarook.com point-of-view