Two days ago, I spent six hours on encrypted apps with contacts inside the country trying to locate one – just one – oxygen concentrator for the mother of my friend, whom I will call “Ma Moon.”

Her mother’s oxygen saturation rate had dropped precipitously in one day from 95 to 70.

I do not know this for sure – in these circumstances, we know we cannot ask this question – but I think the family is being treated on a daily basis by doctors who have “gone underground” in a civil disobedience campaign.

Medical professionals are among the most respected individuals in the country, and so their decision to oppose the February 1 military coup d’etat that took down the elected civilian government carried immense weight among the population.

One estimate provided by public health experts in Myanmar predicts that 50% of Myanmar’s 55 million people will be infected within three weeks by either the Alpha or Delta variant of Covid-19.

One very reputable public health specialist expects that the population will be decimated by at least 10-15 million by the time Covid is done with Myanmar.

In the meantime, Ma Moon, who suffers from a serious co-morbidity condition herself, and her family are all Covid positive and symptomatic.

Nonetheless, Ma Moon’s family dared to break the military’s curfew two nights ago to drive all over Yangon chasing down Facebook leads on possible oxygen concentrators for sale.

In the end, they found one, but in such a heartbreaking way. It came at 2 am, when all parties involved could have been arrested for breaking curfew. The many phone calls we all had made led to one response from a bereft family, whose patriarch had just died.

The oxygen compressor was given to Ma Moon’s family, with only a demand that it be passed on for free to the next victim, when no longer needed. 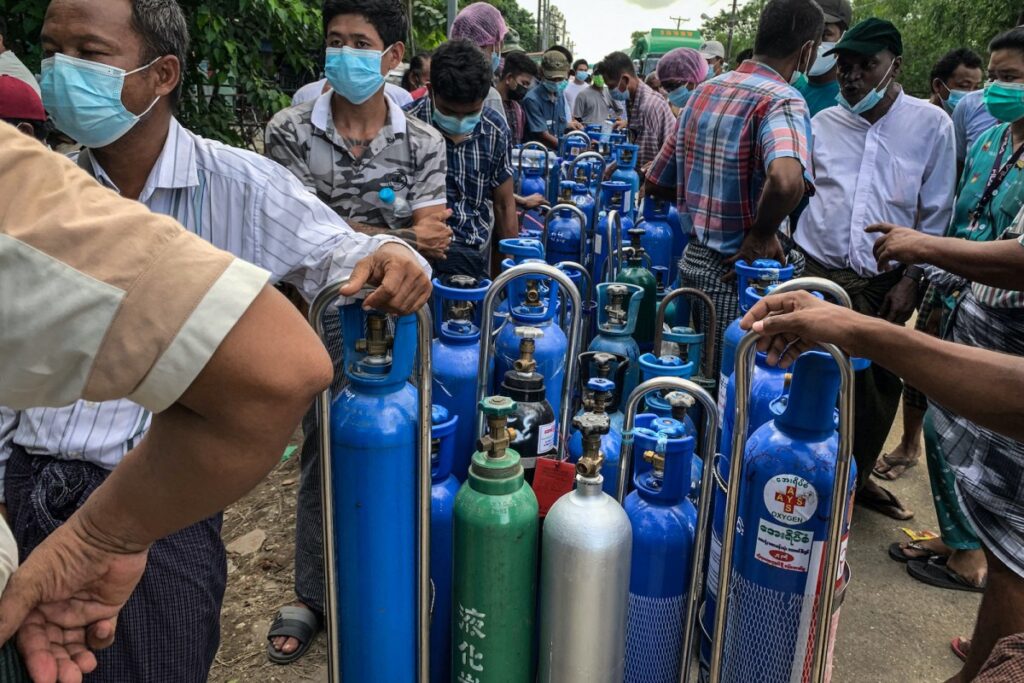 People waiting to fill up empty oxygen canisters outside a factory in Yangon amid a surge in the number of Covid-19 cases on July 14, 2021. Photo: AFP / Ye Aung Thu
Other friends, utterly desperate, have worked out agreements to “share” oxygen concentrators – putting their sickest family members on compressed oxygen for a few hours, then returning the device to another very sick patient for his or her few hours to hope for survival.

And all pray for the remote possibility they will be able to refill the oxygen tanks the next day.

In April, I left Myanmar after attending the funerals of four young men killed in my ward. Already, gunshots fired during cruel nighttime army raids on civilian apartment buildings had started hitting my condo building.

Now in Thailand, I get over 200 encrypted texts per day from friends there. Until last week, most were promoting armed and political resistance to the coup. “Responsibility to Protect” and “No Fly Zone” came up over and over.

Now, 100% of the texts are desperate pleas for health assistance and an international humanitarian intervention. “We need help,” read so many social media posts and flash protestor signs these days.

They do not need help in the future. They needed it yesterday.

I have worked in and on Myanmar for more than 30 years. Everyone I know there is either infected or caring for an infected person. No hospitals accept patients anymore, not even the priciest private ones.

Some of the Covid-infected die on the steps in front of hospitals that reject them. They undoubtedly go untested, with death certificates likely reading “pneumonia” as cause of death.

Health care workers, who began civil disobedience against the coup on February 2, are doing what they can from “underground.” 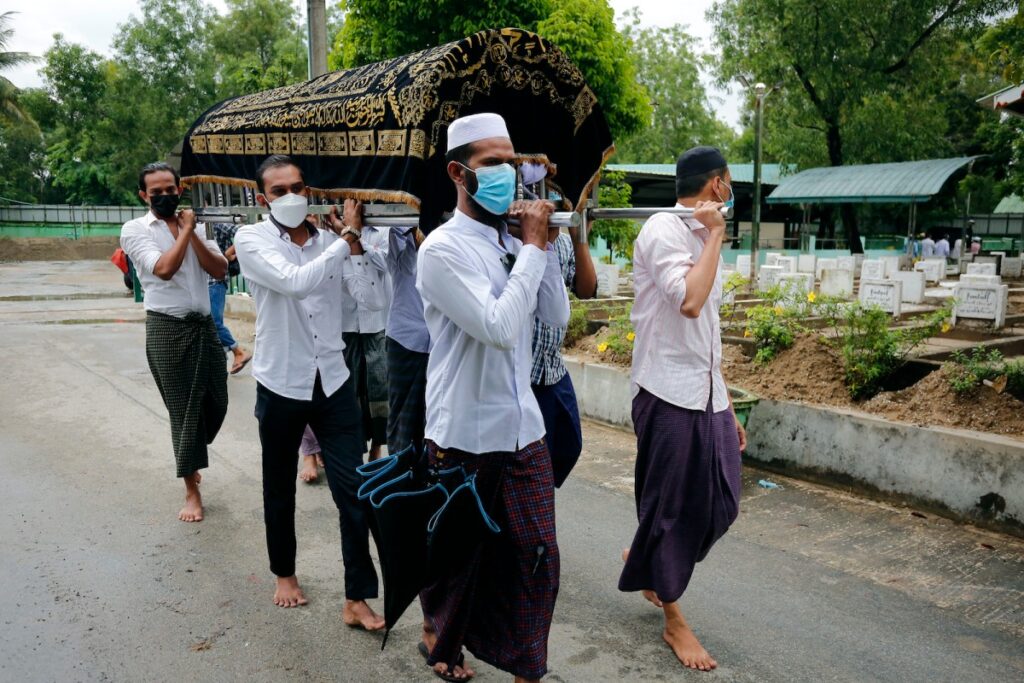 Relatives of a person who died due to Covid-19 carry the coffin before the burial service at a Muslim cemetery in Yangon on July 16, 2021. Photo: AFP / NurPhoto / Myat Thu Kyaw
But still, C95 and N95 masks and PPE are impossible to come by, despite containers full of them sitting in the Yangon port where the Customs Department will not release them.

Most horrifically, there is no oxygen left in the country, or rather, there is oxygen, but only the military gets it.

One does not need to be an epidemiologist, statistician or econometrician to see where this is going. The public health system, to the degree it still exists, will utterly collapse, at this rate of infection, probably within two weeks.

How will that look different from now? Probably dead bodies. Everywhere.

Like all famines in history, and like the huge death toll from Covid in the United States, Myanmar’s misery is almost entirely a political problem.

An elite struggle between the leaders of the army and the legitimately elected civilian government led to the February 1 coup.

The eruption of civil disobedience and armed resistance appears to have been unanticipated by coup leader, military commander-in-chief Senior General Min Aung Hlaing.

Ominously, since May, there has been a burgeoning of counter-resistance militias carrying out assassinations of pro-democracy adherents, left and right.

And then the Delta variant of Covid-19 arrived. And two days ago when we struggled to help her mother, Ma Moon very softly said over an encrypted app, “Everyone is dying.”

What would it take to save the ten million Myanmar lives likely to be claimed by Covid?

As the acclaimed local news outlet, Myanmar Now, argues, “an unprecedented humanitarian intervention” in arguably the most politically, geopolitically, socially and economically fraught country in Asia. 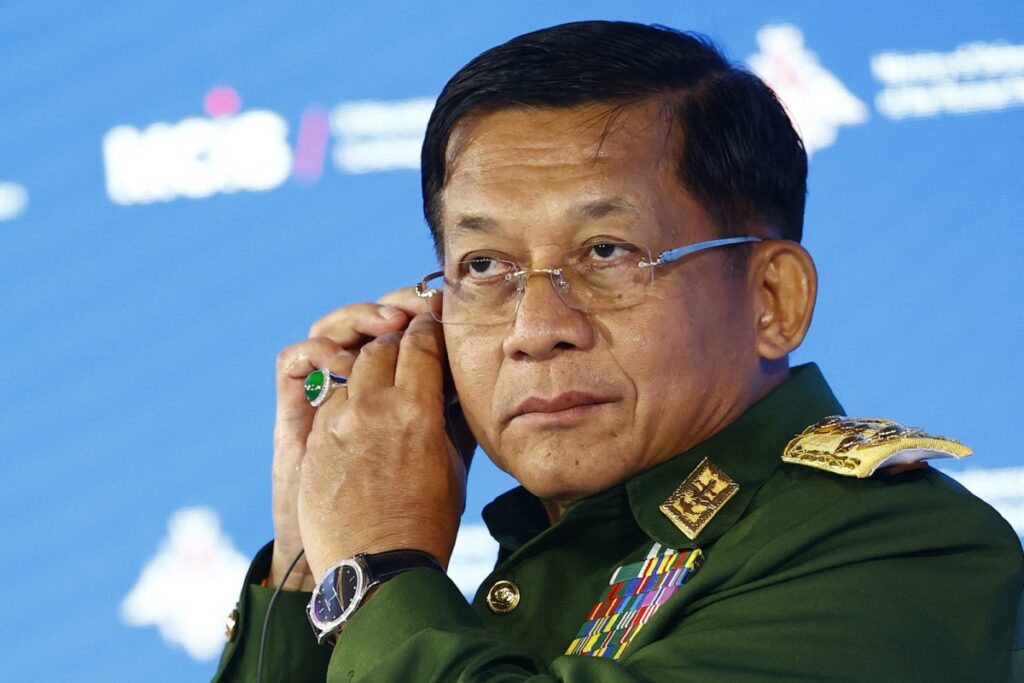 Commander-in-Chief of Myanmar’s armed forces and head of Myanmar’s coup regime Senior General Min Aung Hlaing at the 9th Moscow Conference on International Security in Moscow on June 23, 2021. Photo: AFP / Anadolu Agency / Sefa Karacan
In the last few days of state media reporting on the junta chief’s speeches, he clearly has no intention of asking anyone, other than his good friend, the Russian Defense Minister Sergey Shoigu, for help.

Even Russia can only proffer a trickle of WHO-unapproved Sputnik vaccines, probably in many batches of 10,000, arriving over not months but years, and probably at great cost.

China is busy shoring up and extending an electrified border fence that only Donald Trump would drool over; it already stretches 500 kilometers east and west of the biggest trading post on the China-Myanmar border.

China has closed all border crossings, but it also deployed Covid testing and treatment teams in some remote ethnic armed group-controlled areas to vaccinate all. In these areas, new arrivals are tested, quarantined and then vaccinated.

How about the United Nations? No one wants to say this, but the UN country team of 20+ agencies is utterly overmatched for what it faces. And to the degree those agencies are committed to saving Myanmar lives, they are hamstrung by international legal norms around sovereignty.

With Russia and China on the UN Security Council, the necessary international humanitarian law mandate of a resolution to undertake a military intervention against a junta-in-denial will not happen.

The Association for Southeast Asian Nations (ASEAN) has shown itself thus far gridlocked on Myanmar, having agreed with Min Aung Hlaing to a five-principle response to the multiple crises in the country on April 24, which has been utterly ignored by the junta in Naypyitaw.

And the rest of the world? As one protester’s sign read last week, “If not now, when? If not you, who?” 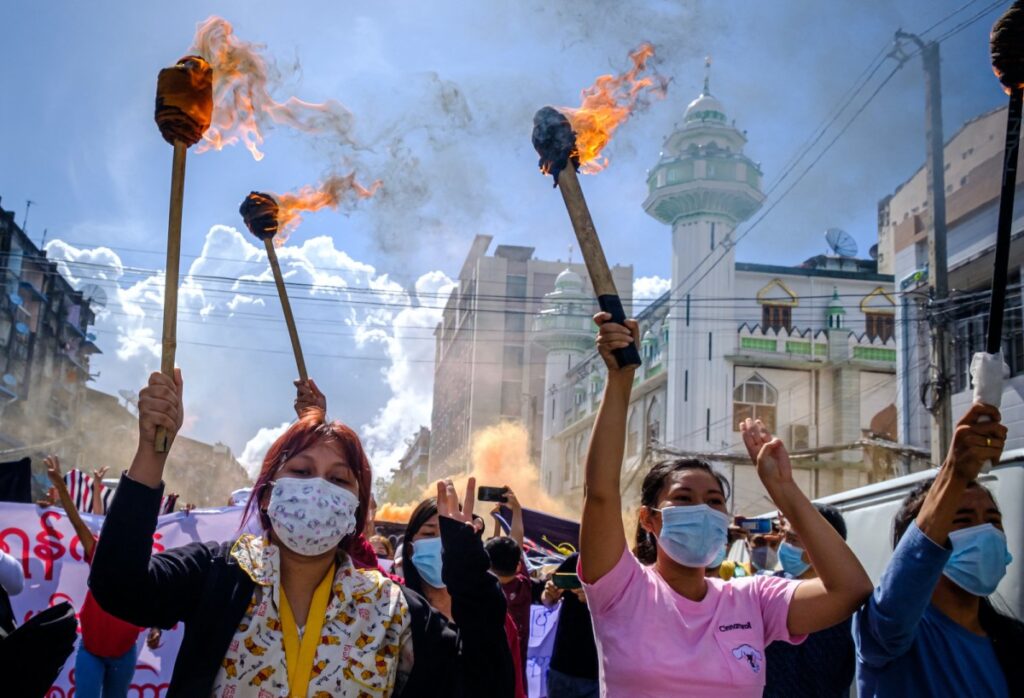 Women carry burning torches at a demonstration against the military coup in Yangon on July 14, 2021. Photo: AFP
There appears to be no urgency around the massive devastation being wrought by the military coup, the economic crisis and the logarithmic spread of Covid amongst a population that has never had proper healthcare.

Ma Moon’s mother died in her arms this morning. Now her mother’s body joins the long queue of coffins at the crematorium. Not having a government laboratory’s confirmation of Covid-19, she will not count in the daily statistics of positive cases or deaths from Covid.

But to Ma Moon and to me, she counted.

Mary P Callahan is associate professor in the Henry M Jackson School of International Studies at the University of Washington. Among her publications over 30 years of working on Myanmar include Making Enemies: War and State Building in Burma (2003). Since 2013, Callahan has been based in Yangon, Myanmar, where she has consulted on issues related to governance, the 2015 and 2020 general elections, political economy, the peace process and ongoing conflicts.

Disclaimer: ‘Everyone is dying’: Myanmar on the brink of decimation By MARY P CALLAHAN - Views expressed by writers in this section are their own and do not necessarily reflect Latheefarook.com point-of-view