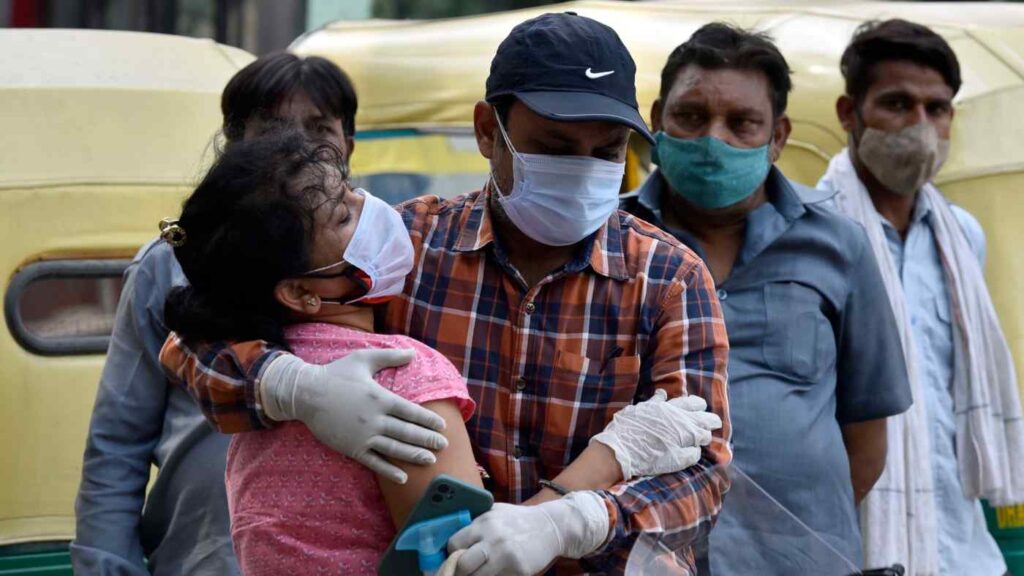 A woman is consoled after the hospital turned away her father from admission in New Delhi on Apr. 29: the Modi government declared premature victory.   © Hindustan Times/Getty Images

RupaSubramanya is a researcher and commentator.

In 2018, when the southern Indian state of Kerala was devastated by floods, Prime Minister Narendra Modi declined foreign assistance, following a precedent set during the Asian tsunami of 2004, when then Prime Minister Manmohan Singh had similarly declined.

The previous year, then Finance Minister Jaswant Singh, in his budget speech, had announced that India no longer needed foreign aid, a doctrine endorsed by every subsequent government, and widely seen as a marker of India’s imminent arrival on the world stage.

While India was in the midst of fighting the first wave of COVID-19 under one of the harshest lockdowns in the world, Modi, in June 2020, had proclaimed a new doctrine of self-reliance, known as Atmanirbhar Bharat, which purported that India’s future would lie in looking after itself and not being dependent on other countries.

This marked a reversal of three decades of globalization in India. The country had opened up to international trade and investment in 1991, the year of India’s economic reforms, which marked a change from a post-independence period characterized by isolation and central planning.

In January, Modi’s optimism seemed to know no bounds. He said: “In times of crisis, India is able to serve the world because India, today, is capable of medicines and vaccines, is self-sufficient. This is also the idea of a self-reliant India. The more capable India is, the more it will serve humanity and the more the world will benefit.”

Taking a leaf from his boss, in early February, when there were incipient signs of a likely second wave, India’s External Affairs Minister, S. Jaishankar, proudly proclaimed that the country’s recovery from the pandemic was evidence that India’s self-reliance drive was working.

Today, India is in the midst of a deadly second wave of the pandemic with no relief in sight. The Modi government initially downplayed this threat and asserted India’s exceptionalism, ignored credible warnings by its own experts and even a parliamentary committee that a second wave was building, and declared premature victory, both to their own citizens and to world leaders.

One mark of this complacency is that, as late as the end of February, the Indian government had ordered only 21 million vaccine doses for a population of 1.3 billion people while at the same time proclaiming to be the pharmacy of the world and engaging in vaccine diplomacy.

Such hubris has now brought India to its knees. The belated about-face and the grudging acceptance of foreign assistance marks a reversal of the long-standing policy of declining foreign assistance and makes a mockery of Modi’s proclamation that India is ready for self-reliance.

In recent days, foreign countries have begun coming to India’s assistance after receiving a tacit signal that such offers are now welcome. Countries are stepping in simply because India is too big to fail. Among major donors, the U.S., France and the U.K. have already begun to deliver emergency supplies such as oxygen plants, ventilators and essential medications used to treat COVID-19.

Even India’s tiny neighbor, Bhutan, has offered the services of its two oxygen generators. Oxygen is in such short supply that some recent deaths are due to the lack of oxygen and could have been prevented were supplies more plentiful.

As the world watches and foreign leaders who had embraced and built up Modi take note, they are all witness to the absence of a coordinated response by the government and the complete failure of leadership combatting the crisis. People have been left to their own devices, with much of the heavy lifting being done by volunteers on the ground trying to pick up the slack. Some state governments are trying to fill the vacuum left by the central government’s inaction, but the absence of coordination means a national response has gone begging.

The Indian government’s climbdown reflects the severity of the current crisis, with the health system having all but collapsed and even mortuaries unable to process all of the dead.

Modi’s spectacular failure to manage the crisis raises important questions about India’s future role in the world. Far from being a reliable partner, and a possible counterweight to a rising China, India has shown that it is barely even able to look after itself.

So mismanaged has been the response that, at the time of writing, many of the aid supplies that have been flown in from abroad have yet to be distributed to where they are needed. What is more, given the scale of its domestic crisis, the Indian government has diverted vaccine doses meant for export to domestic use, raising serious questions about India’s reliability as a source of vaccines going forward.

An important country has been brought to an abject state by multiple failures of its leadership. Indeed, the magnitude of the current debacle is matched only by the boastfulness of Modi’s previous rhetoric: that under his visionary leadership, the 21st century would belong to India.

With COVID19, reality has finally caught up with the rhetoric. Modi’s shining India has now been shown up to be little more than a facade, built upon image management and marketing, which has now collapsed like a house of cards. Not only has India’s image in the world taken a beating, but its credibility as a reliable partner under Modi’s wayward leadership is also seriously in doubt.

Disclaimer: Narendra Modi's COVID catastrophe brings India to its knees By Rupa Subramanya - Views expressed by writers in this section are their own and do not necessarily reflect Latheefarook.com point-of-view