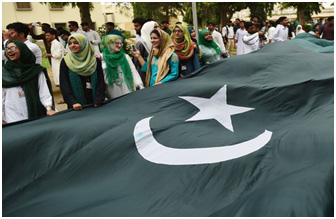 Pakistan’s national day on 23rd March 2021 is a time to look back in order to visualize the future. The country is a prime example of the historian Arnold Toynbee’s theory of challenge and response. If the challenge facing a civilization is too great, then the struggle to survive leaves no room to develop. Conversely, if there is hardly any challenge; there is no spur to change. Progress comes out of the crucible of facing and overcoming the challenges.

The very formation of Pakistan was a tremendous achievement. The Muslim community in the subcontinent had to overcome the opposition of the ruling British colonial power and the larger non-Muslim community. Once independent, it had to make do with skeletal civil services, seven million traumatized refugees, no industrial base, a small ill-equipped military, and hostile neighbours with irredentist claims. Many foreign observers and neighbours assessed that the security and economic challenges were so huge that the new country would not survive.

But Pakistan survived and prospered. Labelling the country as being at the edge of chaos (and a failing state) has been periodically revived by many forces. Reality is much different. Yes challenges persist: internal as well as external. The record of successive governments and their leadership, both political and military, has been mixed.

As Pakistan’s industrial base was being built up, infrastructure augmented, its democratic consciousness deepened. The country’s workers contributed to the process of nation-building as technical expertise got better, while remittances of overseas Pakistanis bolstered the home economy; and a growing middle class.

Despite the country being dismembered in 1971, Pakistan rebounded, enhanced its regional and international relevance, and was looked up to in the Muslim world as the champion of its causes and a strong military power. The tragic events of 1971 imbued policymakers with a never again-dedication. Though unfairly targeted in 1974, Pakistan overcame all sanctions and restraints to become a nuclear power utilizing a technological path unmatched by any nuclear power for its first test.

A nuclear capability not only pivotal for peace and security in South Asia but whose peaceful uses are contributing to electricity generation in this fossil-fuel deficit country and providing no-cost nuclear diagnosis and treatment annually to 800,000 cancer patients.

As Pakistan recovered from the first Afghan ordeal, the tragic terrorist attack of September 11, took place. With Western occupation, the second blowback from Afghanistan began, worsened by the use of Afghan soil by some countries to sponsor insurrectionists in Pakistan with the resultant loss of so many civilian and military lives. It is facile for others to say that Pakistan should ‘do more’ to help resolve Afghanistan or develop a better counter-extremism narrative.

Credit goes to the discipline of the Pakistan people and military that despite the unpopularity of the government’s support for the occupying forces in Afghanistan – who still survive on the oxygen that Pakistan provides – the long and hard campaign against terrorists within Pakistan has been largely won.

Many of the current economic difficulties of Pakistan are due in large part due to the economic costs resulting from the continuing occupation of and turmoil in Afghanistan.

What is more, natural disasters too have not spared Pakistan. The October 2005 earthquake killed 67,000 people within a few hours, the floods of 2010 and 2011 inundated large and heavily populated parts of the country, but the nation rebounded. However the resilience of Pakistanis stands out.

Similarly when the novel coronavirus first arrived in Pakistan in late February 2020, there was widespread concern about the country’s ability to manage the increased disease burden. COVID-19 cases were rising quickly as people returned home from other regional hotspots, and the public-health system urgently needed to be reinforced.  WHO Representative and Head of Mission, originally from Sri Lanka and based in Islamabad, DrMahipala realizes how fortunate Pakistan has been so far and recognizes the dedication of the people who have helped tackle COVID-19.

“There are people who are totally steadfast devoted, who haven’t been home since January.” But the work goes on, Pakistan has fared well in its fight against COVID-19, he said.

What though of the future? It is a time of hope, with significant political change. Prime Minister Khan, has a majority mandate and unlike his predecessors is capable of being decisive.

The solutions to the country’s problems are self-explanatory. While population growth needs to be further reduced and education made a priority, there is a youth dividend, which is increasingly politically active. The China Pakistan Economic Corridor (CPEC), through its multidimensional projects, should continue to contribute towards the transformation of Pakistan.

On this Pakistan day it is clear that the country has a bright future. Though Pakistan’s development has been uneven, the momentum of its 220 million inhabitants, whose indomitable spirit has overcome so many challenges, shall always carry it forward. Pakistan is at the crossroads of history, where pressures on this land from within and without are extraordinary.

Yet the nation is standing up with more resilience and spirit. Disasters, political or natural, come and go. Enemies, terrorists or criminals move on to destabilize the country. But the very next moment, Pakistanis come out with a new vigor to cope with the situation.

Disclaimer: Pakistan- A Resilient Nation - Views expressed by writers in this section are their own and do not necessarily reflect Latheefarook.com point-of-view