The court has effectively given the government two full months to firm up a parallel strategy. The farmers clearly see this “helping hand” for what it is, and have thus sought to evade it. 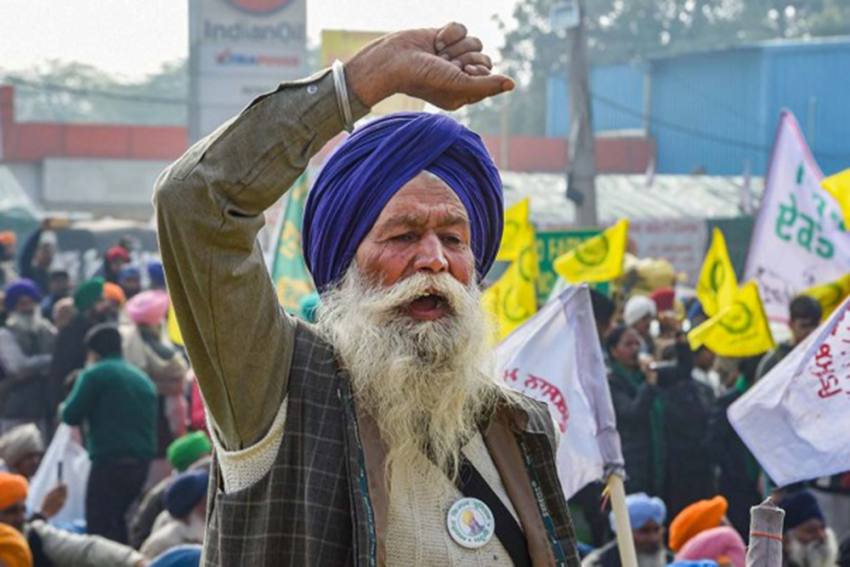 Farmers during their ongoing agitation over the new farm reform laws, at Singhu border in New Delhi.
The Supreme Court evokes contrasting emotions these days with many deriding it is a pliant extension of the Executive while others — particularly those aligned with the government — remain in its thrall. The court’s decision on Tuesday, to stay the implementation of the three contentious farm laws until a four-member committee of individuals gives its recommendations for breaking the ongoing government-farmer impasse will in all likelihood deepen the divide further.

All four nominated to the committee are known supporters of the farm laws and farmers agitating on Delhi’s borders and elsewhere in the country – have rejected the Supreme Court’s so-called effort to end the stalemate. They have refused to appear before the committee to share their grievances. This vote of no-confidence against an initiative of the Supreme Court by people engaged in India’s most dominant profession is a cause for concern.

The court’s direction that “representatives of all the farmers’ bodies, whether they are holding a protest or not, whether they support or oppose the laws, shall participate in the deliberations of the committee”, sounds more like a threat than an effort at reconciliation. A majority of the agitating farmers have, through their representatives, already said that they are not inclined to attend the committee’s meetings and would settle for nothing less than a repeal of the three laws by the government.

Even if the court’s order compels the farmers to appear before the committee, the likelihood of any resolution is remote – especially since the court, for reasons that it left unexplained, packed the committee with Bhupinder Singh Maan, PK Joshi, Ashok Gulati and Anil Ghanwat; all votaries of the three farm laws.

The representatives of the agitating farmers have already spoken – and they will speak more, whether before the committee or at the protest sites – on why the Supreme Court’s decision doesn’t instil them with confidence. Thus, second guessing what the agitating farmers may have to say will serve no point.

It is, however, important to understand this novel precedent that the apex court – specifically the three-judge bench headed by Chief Justice of India S.A. Bobde – has set with Tuesday’s order. Equally important is to also analyse some of the verbal remarks made by the Chief Justice as also by Attorney General K.K. Venugopal, Solicitor General Tushar Mehta and some other parties in the case during the course of arguments in the matter over the past two days.

First, the decision to stay the implementation of the three farm laws and to set up a committee instead that would deliberate with stakeholders concerned various points of contention and, within two months of its first sitting, submit a report to the court. A plethora of legal experts have commented in detail on the extra-constitutional dimension of the court’s order. This is, perhaps, the only instance wherein the apex court has gone ahead and stayed the implementation of a law without even hearing the parties concerned argue the prima facie constitutional validity of the three farm laws.

Curiously, at Monday’s hearing in the matter, it was the Attorney General, the country’s highest law officer, who while clearly batting against the laws being kept in abeyance explained to the court that for a legislation to be stayed by the judiciary, one of two key grounds need to be argued and proven. The first: that the law violates fundamental rights and second: that it was passed without legislative competence. The court’s belligerence in ordering the stay, without even establishing these basic criteria, flies in the face of constitutional jurisprudence. And since the constitutional validity of the three laws was neither argued nor established, the stay clearly violates the separation of powers between the Executive and the Judiciary.

Even a secondary school student of civics has been taught that when it comes to making central laws, it is exclusive prerogative of the Parliament and not of the judiciary. This basic principle has, in fact, been reiterated countless times by the Supreme Court in various judgments – affecting legislations passed by various governments. The bench led by CJI Bobde, however, chose to ignore established precedents. There were ample grounds for discussing the constitutional validity – or rather the lack of it – of the three laws but parties who wished to argue them, representatives of farmer unions in particular, were given no chance to do so. The manner in which the legislations were rammed through Rajya Sabha too found no detailed debate in the courtroom nor did the court seek to understand how issues figuring in the concurrent list were dealt with in the laws without the Centre allegedly taking the State governments into confidence.

The briskness of the court’s action in this case is at stark contrast with its lethargic pace in dispensing challenges to the constitutional validity of several laws brought by the current regime over the past few years. The sheer volume of cases pending before constitutional benches of the Supreme Court in extremely important matters – abrogation of Article 370, the CAA, etc. – is mind boggling. The apex court, however, hasn’t found it necessary to either list these matters for hearing and establishing the grounds of challenge – Constitutional Validity – nor imposed a stay on the implementation of these laws.

Tuesday’s order favours the government which was in trouble over the set of farm legislations opposed by a formidable section of India’s electorate. The government had conducted eight rounds of talks to defuse the situation and failed. It needed an exit without appearing to back down. The court provided the government just that – a clean exit. It chose to stay the laws – at least for two months – and formed a committee of people who think the laws are good to explain why they aren’t. These two months now give a beleaguered government much needed time to find a way out of its misery and also to tire and frustrate the countless agitating farmers who have been camping at Delhi’s borders braving biting cold, hail and thundershowers.

The court also said that pending its further orders, the Minimum Support Price system that existed before the passage of the three laws in Parliament will continue and that no farmer should be “dispossessed or deprived” as a consequence of these laws. The government has, anyway been insisting that the laws will not affect the MSP regime nor dispossess any farmer of his land – except, of course, the government doesn’t want to spell this out in the law. So what does this order really mean for farmers who believe that the three laws do not protect their interest?

Now to the verbal remarks made by the court, the AG and SG during these proceedings. It can be said that Monday’s proceedings in the matter began on a note that gave many the hope that the “majesty of the court had been restored”. The CJI began by reading the riot act to the government for its clear mishandling of the protests and for not carrying out proper consultations before drafting the laws. Those aggrieved by the laws as also others who may not be farmers but are invested deeply in the idea of judicial independence were glad to see the court reprimanding an evidently high-handed and arrogant government too consumed by its ego. And, then it all changed.

The CJI wanted legal representatives of farmers to assure the court that “women and elderly” will leave the protests. Surely, the court recognises an individual’s fundamental right to protest and doesn’t believe that this can be suspended at the whims of the Executive or the Judiciary. Did it escape the Supreme Court that a staggering 98 million Indian women work in the agriculture sector, as per the 2011 Census, of which 61.6 million are agricultural labourers – the stakes for the women in agriculture are just as high as their male counterparts if the farming community feels that these laws aren’t good for them. So why should the CJI or his brother judges – none of whom are farmers – even suggest that women not participate in these protests?Is it not bad enough that the court could think of no woman member for the committee meant to ease problems of the farming community that it now also wants women farmers to leave the protest sites too?

There were several other problematic utterances during these proceedings – by the court, the government’s law officers and some lawyers appearing for various farmer unions. The one that, however, takes the cake was Attorney General Venugopal, Solicitor General Mehta and senior advocate Harish Salve’s claim that Khalistani outfits and other banned outfits had infiltrated the farmer protests. Venugopal has also been directed by the court to submit an affidavit on this issue and the AG told the bench that he will give details of inputs from the Intelligence Bureau to prove this infiltration. One wonders why a nationalistic government has held eight rounds of talks – and proposed more – with the agitators if it has IB inputs confirming presence and involvement of anti-national and separatist outfits in the protests? Or is this just another way of defaming the protestors while the SC-appointed panel takes its two months to deliberate on the farm laws – a tactic employed by the Centre when Shaheen Bagh witnessed the anti-CAA protests last year or when any of its policies and leaders are criticised by a range of other “anti-nationals”?

While the Centre is expected to be at its menacing worst when it informs the court about the so-called “anti-nationals” instrumental in fomenting the protests, the court has already laid the ground for dispersing the farmers from the protest sites surrounding Delhi after having first vociferously defended their right to protest. Notice has been issued by the court on an application by the Delhi police seeking a ban on a tractor rally that the agitating farmers have threatened to carry out on Republic Day. The court also spoke about the possibility of shifting all protestors to one site – something the government has wanted to do ever since the farmers began their siege of Delhi over a month ago.

The court has now effectively given the government two full months to firm up a parallel strategy. The farmers clearly see this “helping hand” for what it is – a trap – and have, thus, sought to evade it.

Disclaimer: Supreme Court Bats, Government Fields, Farmers Stumped - Views expressed by writers in this section are their own and do not necessarily reflect Latheefarook.com point-of-view