The takeover is terrible for Myanmar. It may be worse for the country’s most vulnerable. 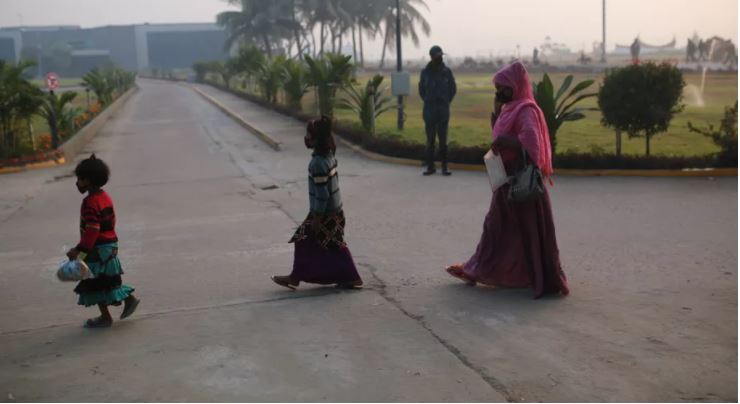 The Myanmar military overthrew its civilian government in a coup on Monday, ending the facade of democratic rule and creating an even more uncertain future for human rights in the country — especially the persecuted Rohingya and other ethnic minorities.

The aftermath of the coup is still unfolding, but human rights advocates and experts told me they are increasingly fearful of what might happen to anyone who challenges the regime.

“The options available to the Burmese people are very, very limited because I don’t think there’s much influence inside the country,” Mabrur Ahmed, founder and director of Restless Beings, a UK-based human rights group, told me. (Burma is the country’s former name; the military junta changed it to Myanmar in 1989, but many, especially those in the pro-democracy movement, still use the older name.) There is not much people can do besides protest, Ahmed said — though any protests, he added, would likely be met with violence from the military.

The plight of the Rohingya and other ethnic and religious minorities in the Buddhist-majority country may be even more precarious amid this political turmoil.

Many of Myanmar’s minority groups remained seriously marginalized by the government throughout the country’s stilted move toward democracy, which began more than a decade ago. Isolated politically and economically, Myanmar’s military leaders put forward a new constitution in 2008 that took some responsibilities away from the military, though it still retained much of the real power. In 2015, Myanmar’s pro-democracy champion Aung San Suu Kyi and the party she led won in a landslide election, and Suu Kyi became the “state counselor,” a de facto civilian leader, the following year.

But ethnic and religious minorities, including the Rohingya, were largely excluded from the 2015 vote. Ahead of the November elections that preceded this coup, many minority groups — about 1.5 million voters — were again disqualified from participating at all.

The state has also continued to engage in outright violence against some groups, most notably the Rohingya, a Muslim minority group in Rakhine State. More than 750,000 Rohingya have fled to neighboring Bangladesh since 2017, when the military escalated a brutal campaign against the group, burning villages and committing murder and gang rapes with what a United Nations human rights report termed “genocidal intent.”

The military has targeted ethnic and religious minorities in other places, as well, including in Kachin and Shan states. An independent fact-finding report commissioned by the UN Human Rights Council and published in 2019 found that “Myanmar’s ethnic groups have a common — but not identical — experience of marginalization, discrimination and brutality at the hands of the Myanmar armed forces, the Tatmadaw.”

Maung Zarni, a Burmese activist and the co-founder and general secretary of Forsea, an advocacy group that campaigns for democracy and human rights in Southeast Asia, said he thinks the human rights situation may worsen in the coup’s aftermath.

“The different minority communities, they’re in between a rock and a hard place,” Zarni told me. “If they just lie back and take it, they lose. Then if they try to be proactive and try to activate any human rights mechanisms outside of Burma, the army will single them out in an increase of repression.”

And that army is now fully in charge of the government. Gen. Min Aung Hlaing, head of the Tatmadaw, has been credibly accused of genocide and war crimes. The US sanctioned Hlaing in 2019 for human rights abuses against the Rohingya.

“The military is responsible for genocide against the Rohingya and other severe human rights abuses against other ethnic minorities, including the Rakhine, Kachin, [and] Shan,” Daniel P. Sullivan, a senior advocate for human rights at Refugees International who focuses on Myanmar, told me. “The idea of them now being in control just feeds the impunity that they’ve been able to enjoy for so long.”

Human rights did not improve during Suu Kyi’s leadership

Atrocities against the Rohingya and others happened during Myanmar’s flirtation with democracy, during the tenure of Aung San Suu Kyi. Suu Kyi was Myanmar’s champion for democracy, the famous daughter of the man who helped win the country’s independence. For her activism, the military placed her under house arrest in the late 1980s until 2010. She won the Nobel Peace Prize in 1991 for her pro-democracy efforts, and as the country took steps toward democratization, she became its de facto civilian leader in 2015.

Those steps were tentative, however, and incomplete. Once in her role, Suu Kyi deferred to the military, which retained significant power under the new arrangement. As the crackdown against the Rohingya intensified, she received international criticism for her silence. She has referred to evidence of atrocities as “fake news” and framed the crackdown as operations against terrorism. In 2019, she defended Myanmar against charges of genocide at the International Court of Justice in the Hague, Netherlands.

Suu Kyi was — and is — extraordinarily popular within Myanmar, but her refusal to condemn specifically the treatment of the Rohingya showed the fault lines in Myanmar’s democratic experiment.

About 30 percent of Myanmar’s population are ethnic minorities — some 130 groups, according to the Washington Post. Some of these groups have armed wings, and Myanmar has some of the world’s longest-running civil wars, which began after the country gained independence in 1948.

“That is the level of discontent and fear on the part of ethnic groups, and they don’t trust the military. They also feel Suu Kyi is colonialistic,” Zarni said. “Sui Kyi and the military — they differ only in degrees, not in kind, in terms of their perspective or sentiments toward non-Burmese Buddhist minorities.”

The military has now detained Suu Kyi and the party’s civilian leadership as part of its takeover. Some critics say it makes no difference, particularly for the Rohingya. It was bad before and will remain so.

“For us, the civilian government and the military regime are the same, so for us nothing will change,” Nay San Lwin, co-founder of the Free Rohingya Coalition, told me. “They can’t do more than what they are doing now.”

Experts and human rights activists said the coup, in a way, revealed how hollow Myanmar’s democratization really was. As Zarni put it, “The coup has killed the biggest lie.”

“Even though Myanmar always had the veneer of democracy, it was never a new democracy in any sense,” Azeem Ibrahim, director at the Center for Global Policy in Washington, DC, and author of The Rohingyas: Inside Myanmar’s Hidden Genocide, told me. “The military still held all the cards. They had, essentially, power without any accountability whatsoever.”

There are legitimate concerns the situation may worsen and that an unaccountable military may be even more emboldened after the coup.

“A moment like this, where the perpetrators of those atrocities have taken as a power grab, really raises the concerns and the risks of further atrocities happening to groups like, particularly, the Rohingya,” Sullivan of Refugees International said.

Even a nominal civilian government served as, if not a check on, then it at least sometimes slowed down the worst of the military’s impulses. The motions of democracy — setting up committees, having to get approval for measures — took time. Now, even that is gone.

“What I can say,” Ahmed, the human rights activist, told me, “is that any sort of pebbles that might have been on the path have now been removed.”

Activists see the coup as an opportunity to hold Myanmar accountable

Sullivan said his group has urged the Biden administration to designate what’s happening to the Rohingya a “genocide.” Biden’s State Department is reviewing the designation, which advocates believe will help rally international pressure to the Rohingya’s cause.

Meanwhile, the Biden administration has already officially declared the takeover in Myanmar a coup. “The United States removed sanctions on Burma over the past decade based on progress toward democracy,” Biden said in a statement Monday. “The reversal of that progress will necessitate an immediate review of our sanction laws and authorities, followed by appropriate action.”

The State Department said Tuesday that the administration will review reimposing economic sanctions on Myanmar that had been removed in 2016 as Myanmar moved toward democratization.

“We will take action against those responsible, including through a careful review of our current sanctions posture, as it relates to Burma’s military leaders and companies associated with them,” a State Department official told reporters on a conference call Tuesday, using the country’s former name. “Most importantly, we will continue to stand with the people of Burma.”

Experts and advocates said the military coup gives the new Biden administration and international partners an opportunity to put renewed pressure on Myanmar, especially when it comes to its human rights abuses and atrocities against the Rohingya.

Countries condemned the violence against the Rohingya, and the United States used tools like targeted sanctions to punish individual figures within Myanmar’s military. But experts told me that some governments were reluctant to push too hard because they feared too much pressure might upset Myanmar’s fragile, if imperfect, democracy.

“All of that has now been uprooted,” Ibrahim said of the coup. “It was very clear who’s running the show. There is no more facade, or veneer, of democracy.”

“The military coup has been conducted by the same military who were accused of committing genocide or crimes against humanity,” Wai Wai Nu, founder of the Women’s Peace Network, which advocates for human rights in Myanmar, told me. “This impunity that has been given to this military must end. The world must hold accountable the military, not only for the coup, but especially for the crimes of genocide.”

But some advocates warned that too much international pressure on Myanmar, especially if linked to the Rohingya, might create the unintended consequence of angering the Myanmarese military and provoking a backlash — one they might take out on the Rohingya.

“I’m just echoing the voices of the Rohingya that I know and I’ve spoken to do, who fear they are going to be number one, front and center, of the Burma military showing its power,” Ahmed said. He said his Rohingya contacts did not want to speak after the coup because they are fearful and don’t know what is going to come next.

All of this has made Myanmar’s future look grim, for its minorities and for any democratic future. “The entire country is going to suffer for years,” Nay San Lwin said. “We don’t know how long.”

Disclaimer: What Myanmar’s coup could mean for the Rohingya and other persecuted minorities By Jen Kirby - Views expressed by writers in this section are their own and do not necessarily reflect Latheefarook.com point-of-view