The president-elect’s actions in the Middle East will be dictated by events. But the loss of Trump represents a body check for the ambitions and aspirations of Gulf hegemons

You can detect the shadow of Donald Trump fading from the Middle East in the nervous twitches of his closest allies.

Israeli Prime Minister Benjamin Netanyahu is accelerating settlements before the inevitable freeze or pause in construction in January when President-Elect Joe Biden takes over. Egyptian President Abdel Fattah el-Sisi is releasing just a fraction of the estimated 60,000 political prisoners he has stashed in his jails.

Sisi’s television anchors are, from one day to the next, given different scripts to read out. Take the sad case of Nashaat al-Deehy. When Biden was a candidate, al-Deehy trashed him: “Joseph Biden will become the oldest US president in the history of the United States of America. On 20 November he will be 78 years old. This will impact his mental situation and he suffers from Alzheimer’s and therefore is not fit to be president of the United States of America.”

But once the US media had called Biden president-elect, al-Deehy became respectful. “We have just learned that President Abdel Fattah el-Sisi sent a congratulations cable to US President-elect Joe Biden. This man has great respect for Egypt and is known to be wise and he listens well. He does not take decisions frantically. He does not take decisions when he’s angry. All of this was missing in the case of Donald Trump, who was violent and stubborn and arrogant. All of this we’re seeing it.”

The Saudi ambassador in London is in an equal turmoil. One day he hints to the Guardian that jailed women activists could be freed during the G20 summit next week.

“The G20, does it offer an opportunity for clemency? Possibly. That is a judgment for someone other than me,” said Khalid bin Bandar bin Sultan bin Abdulaziz Al Saud. “People ask: is it worth the damage it is causing you, whatever they did? That is a fair argument to make and it is a discussion we have back at home within our political system and within our ministry.”

The next day he calls in the BBC to deny what he has just said.

The king himself is by no means immune from wild policy swings. He has started being nice to Turkey.

A week after the earthquake in Izmir, Salman ordered the dispatch of “urgent aid” to the city. Then we learn that the king of Bahrain Hamad bin Isa Al Khalifa and the Turkish President Recep Tayyip Erdogan were in talks. The occasion was to present condolences for the death of the Bahraini Prime Minister Prince Khalifa bin Salman Al Khalifa. But direct contact with a satellite of Riyadh would have been impossible without a green light from the diwan, the Saudi royal court.

Ever since Erdogan refused to let the murder of the Saudi journalist Jamal Khashoggi in Istanbul drop, he has become a hate figure in Riyadh. Turkey has been declared – repeatedly –  a regional threat by Saudi social media and Turkish goods subject to a growing boycott. Now it has all changed.

These are small gestures, but telling ones, as Trump leaves office.

Top of the list of nervous allies is the man who used Trump to fashion his rise to power.

To become crown prince, Mohammed bin Salman (MBS) had to get rid of, and trash the reputation of his elder cousin Mohammed bin Nayef, who was at the time the CIA’s prime asset in the country and the Gulf region. Before he did this, bin Salman phoned Jared Kushner, Trump’s son in law and Middle East adviser, to ask permission. It was given, sources with knowledge of the call told Middle East Eye.

Biden knows bin Nayef personally. Bin Nayef’s chief of staff and former interior minister Saad al-Jabri has fled to Toronto. A few days after Khashoggi’s assassination in the Saudi consulate in Istanbul in October 2018, MBS despatched another crew from the Tiger Squad to kill al-Jabri, according to a lawsuit filed under the Torture Victim Protection Act in the US District of Columbia.

Al-Jabri was lucky. Border agents at Toronto International Airport detected the operation and sent it back home. All this is active evidence. None of this has been dealt with. The CIA’s own assessment that MBS ordered Khashoggi’s killing has never been published.

It is not just Biden himself the crown prince has to fear – although the presidential candidate reserved his sharpest words for the killing of Khashoggi – but the return of the CIA to the top table of decision making in the White House.

Overnight MBS goes from having a president in the White House who “saved his ass”, as Trump put it, to a successor who is not remotely interested in doing the same. Biden has every incentive to encourage MBS’s many enemies in the royal family to step forward to prevent the over-ambitious prince from becoming king. There are enough of them, by now.

Get out of jail card

He could use Israel as his get-out-of-jail card, by pushing for recognition and normalisation. There is bipartisan support in Congress for the Abraham Accords signed between the United Arab Emirates, Bahrain and Israel. 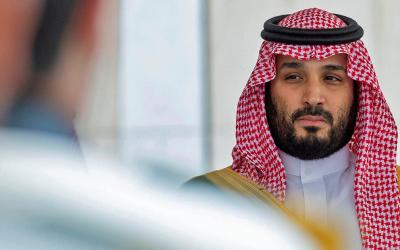 Although the incoming Biden administration will put more emphasis on restarting direct negotiations between the Palestinian Authority and Israel, it would not stop another major Arab state like Saudi Arabia from joining the party.

The opposition to Saudi normalisation with Israel would be at home, not abroad. Recognising Israel would be perilous domestically. However much Saud al–Qahtani’s social media trolls bully Saudi public opinion, it is ferociously pro-Palestinian and anti-Zionist.

The custodian of the Two Holy Mosques recognising Israel? Not over many Muslims’ dead bodies.

Each time MBS has had to walk back on his wish to recognise Israel (and he was very near to flying to Washington and playing the role of smiling sponsor at the signing ceremony in the White House, before cancelling at the last minute) he has turned to his father, the king, to say that nothing has changed and reaffirm official state policy.

This is the Arab Peace Initiative published by his predecessor King Abdullah in 2002 and it only allows  recognition of Israel after a negotiated solution has been found based on 1967 borders.

The loss of Trump’s “крыша” – or protective roof – and the arrival of a hostile president in Biden will mean that MBS will need his father in the post as king even more than he has done in the past. We know from Saudi sources that at one point MBS was toying with the idea of forcing his father’s premature abdication on health grounds and seizing the crown himself.

In his latest round of purges, MBS targeted leading members of Hay’at al-Bayaa (the Allegiance Council) whose role is to approve a royal succession and the appointment of a new crown prince.

The latest arrests to purge the Allegiance Council of his critics would only have made sense if MBS himself was intending to becoming king. But that was in good times, when bin Salman’s star was rising and he could still visit London and Washington without creating flashmobs of human rights protesters.

In bad times, the king remains the tribal chief, who commands the loyalty of the royal family and the kingdom. Regardless of Salman’s actual mental condition, he is still the head of the family and there will be no rebellion against him. The same would not apply to his son if he pushed his father aside and seized the crown. He would be fair game for a palace coup. This is probably the main reason why the father is still king.

The fate of the regional alliance that a future King Mohammed was attempting to build around himself also hangs in the balance. The real fight going on in the Sunni Arab world is about who would take over as leader and Western proxy.

The purpose of the alliance with Israel – in Emirati eyes – is not to increase wealth but power, power to become, with Saudi Arabia under King Mohammed, the regional hegemon.

But the role that an “Arab Nato” alliance was intended to play to combat and curb Iran will now be diminished by Biden’s attempt to restore the nuclear agreement with Tehran. Iran’s rulers stared Trump in the eyes and did not blink first. They outlasted this US president as they have done to Jimmy Carter and every president who followed him.

The nuclear agreement (known as JCPOA) was Barack Obama’s crowning foreign policy achievement – although it was the fruition of years of negotiation involving many countries and past foreign ministers – the so-called P5 plus one, the permanent members of the UN Security Council plus Germany, and Turkey and Brazil before them.

However, each side’s moves are sequenced and whatever difficulties that lie on that path, Biden will pivot once more to restoring this nuclear agreement. Even if some sanctions continue, the policy of using them to exert “maximum pressure” will be over.

Detente will inevitably create a new reality in the Gulf region.

It will also create a new reality for members of the opposing alliance, Turkey and Qatar. Biden is no admirer of Erdogan, with whom he has spent many hours talking. He has apologised to Erdogan once for remarks suggesting that Turkey helped facilitate the rise of the Islamic State group. He is not about to do that again soon.

In a meeting with the New York Times’ editorial board filmed in December, Biden described Erdogan as an autocrat. Asked about how comfortable he felt with the US still basing 50 nuclear weapons in Turkey, Biden said his comfort level had “diminished a great deal” and that he would be making it clear to the Turkish leader that the US supports the opposition.

Once in power, Biden may find it more difficult to express this personal hostility. Whether he likes it or not, Turkey is a more confident regional military power than it was in Obama’s time.

Its military has proved itself as a counterweight to Russian military power in Syria and Libya, and it has just achieved a major breakthrough in Nagorno Karabakh, establishing for the first time access by road from the Turkish border to the Caspian Sea.

This is a strategic win for the Turkish state.

If he is going to partially lift sanctions on Iran, Biden will find that he needs Turkey as a regional counterbalance. There are today too many arenas, from Syria and Iraq to Libya, where Turkey has become a player. Biden has to deal with these “facts on the ground” whether he likes it or not.

Similarly, pressure will also now grow on Saudi Arabia to end its siege on Qatar. Their immediate neighbour, the UAE, will always regard Qatar’s pro-Islamist foreign policy as an existential threat. But the same does not apply to Riyadh, and quiet negotiations in Oman and Kuwait have already taken place.

Biden’s actions in the Middle East will be dictated by events. But the loss of Trump represents a body check for the ambitions and aspirations of Gulf hegemons.

Disclaimer: For Trump's Middle East allies, Joe Biden is a new nightmare By David Hearst - Views expressed by writers in this section are their own and do not necessarily reflect Latheefarook.com point-of-view