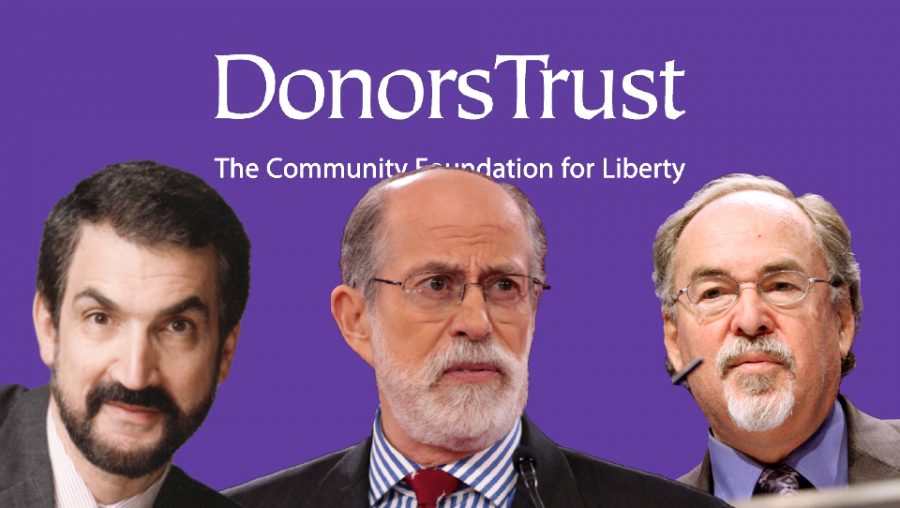 “We share your commitment to protecting our Nation’s constitutional liberties and strengthening civil society,” reads the website of a prominent right-wing foundation. What it doesn’t add is that by donating to hate groups, it has been helping diminish the civil liberties of Muslim-Americans, immigrants, and the LGBTQ community.

The Right’s favorite dark-money conduit, DonorsTrust, continued to fund several anti-Muslim and anti-LGBTQ nonprofits in 2018, according to its latest federal tax form. As a donor-advised fund, DonorsTrust allows the identities of wealthy conservative donors to stay hidden and is used heavily by major right-wing funders, including the Koch, Bradley, and Mercer family foundations.

Recipients Spew Anti-Muslim Hate and Amplify It on the Internet

DonorsTrust gave more than $3.1 million to anti-Muslim and anti-LGBTQ groups in 2018, including $715,000 to groups that the Southern Poverty Law Center (SPLC) designates as hate groups.

These 2018 donations add to the running total of hate-group funding from DonorsTrust and a connected charity over many years. Over the most recent five-year period on record, from 2014-18, DonorsTrust and its sister nonprofit, Donors Capital Fund, gave over $13 million to organizations that profess anti-Muslim, anti-immigrant, or anti-LGBTQ sentiments, including more than $2.7 million to nonprofits considered hate groups by SPLC.

The two biggest hate group recipients of DonorsTrust and Donors Capital Fund are the Center for Security Policy, an anti-Muslim group founded by former Ronald Reagan official Frank Gaffney, which took in nearly $1.7 million from DonorsTrust and Donors Capital Fund from 2014-18, and the David Horowitz Freedom Center, which got $531,000 from the two groups over that time period.

“The difference between Islamic fanatics, or Jew haters, and Hitler is that Hitler hid the Final Solution, and the Iranians and Hezbollah shout it from the rooftops. And the whole Muslim world accepts it,” said David Horowitz, founder of anti-Muslim hate group and DonorsTrust grant recipient David Horowitz Freedom Center, in a 2016 speech. One of the center’s subsidiaries, Robert Spencer‘s Jihad Watch, is also considered an anti-Muslim hate organization by the SPLC.

“Neo-Nazis and leftists” are the “real neo-Nazi movement in American,” Horowitz tweeted in 2017. White nationalist “Richard Spencer and his Charlottesville idiots are marginal and have no significant following, unlike [Students for Justice in Palestine] and the campus Jew-hating left,” he claimed.

Two anti-Muslim groups not considered hate groups by SPLC have also been heavily funded by one or both donor groups since 2014. The Middle East Forum, a Philadelphia-based nonprofit founded by Daniel Pipes that portrays Islam as an inherently violent ideology, got nearly $9.5 million from DonorsTrust and Donors Capital Fund from 2014-18, and the Islamophobic propaganda organization the Middle East Media and Research Institute has received over $460,000 from DonorsTrust since 2015.

SIA operates under the American Freedom Defense Initiative, also designated as a hate group, to which DonorsTrust gave $70,000 from 2014-16.

“These findings are disturbing, even if unsurprising,” Abbas Barzegar, national director of research and advocacy at the Council on American-Islamic Relations, told CMD. “In particular, the continued direct support for Daniel Pipes’ Middle East Forum by some of our country’s largest philanthropic institutions should cause alarm.”

Since 2014, DonorsTrust and Donors Capital Fund have made donations to nine SPLC-designated hate groups and three additional anti-Muslim organizations, according to federal tax records and annual reports consulted by CMD.

DonorsTrust did not respond to CMD’s request for comment.

Alliance Defending Freedom, a large network of homophobic and transphobic lawyers, falsely links homosexuality with pedophilia and claims a “homosexual agenda” will bring down Christianity and “the family.” The group has supported the criminalization of gay sex in the U.S. and the forced sterilization of transgender people abroad. Donors Capital Fund gave Alliance Defending Freedom $330,000 in 2015, and DonorsTrust added $17,250 from 2015-18.

Anti-LGBTQ hate groups the Pacific Justice Initiative, which has claimed that marriage equality leads to incest, and Liberty Counsel, which ties homosexuality to pedophilia, have received $11,000 and $2,000, respectively, from DonorsTrust since 2017.

DonorsTrust and Donors Capital Fund, which were spun off from the Philanthropy Roundtable in 1999, are donor-advised fund sponsors, meaning they manage clients’ individual charitable accounts, investing the money for fees and distributing it based on the clients’ “advice” when the client chooses. Once clients put money into their charitable accounts with the fund sponsors, the money is legally owned by the sponsors, who have complete discretion over where it goes. However, most donor-advised fund sponsors pass along their clients’ money to any 501(c)(3) nonprofit in compliance with IRS rules, regardless of ideology.

Donors who give through DAF sponsors such as DonorsTrust may keep their identities secret from the IRS and the public, as their money is legally owned and distributed by the sponsor.

Through family foundations, Charles Koch is one of DonorsTrust’s biggest donors. The Kochs’ Knowledge and Progress Fund, which stopped giving out grants in 2016, funneled over $5.3 million in charitable contributions through DonorsTrust from 2014-15. The Charles Koch Foundation gave DonorsTrust $980,000 from 2014-18.

Charles Koch does not typically fund organizations that focus their work on explicitly anti-Muslim or anti-LGBTQ efforts. He has, however, financed conservative groups that support President Donald Trump’s Muslim ban and provide content for a website that has published several white nationalists. In addition, his vast political network has helped elect scores of state and federal lawmakers who promote anti-Muslim and anti-LGBTQ policies.

The Charles Koch Foundation did not respond to CMD’s request for comment.

Other major right-wing philanthropy vehicles that use the services of DonorsTrust do fund such hate groups through their family foundations. The Harry and Lynde Bradley Foundation and the related Bradley Impact Fund, which combined to give DonorsTrust and Donors Capital Fund $360,000 from 2014-18, donated $928,000 directly to the David Horowitz Freedom Center, $175,000 to the anti-LGBTQ Family Research Council, and five-figure amounts to Middle East Forum, the Middle East Media and Research Institute, and the anti-LGBTQ Ruth Institute during that time period. In 2019, the Bradley Foundation gave another $150,000 to the Family Research Council in 2019, according to the foundation’s website.

The family foundation of Robert Mercer, a far-right businessman, Trump supporter, and former Breitbart News investor, has recently given significant sums to DonorsTrust: $10.9 million since 2016, including $8.2 million in 2018. From 2014-18, the Mercer Foundation gave $450,000 to the anti-Muslim Gatestone Institute, which was formerly chaired by Trump’s recent National Security Advisor John Bolton, an Iran war hawk. A secretive nonprofit, Making America Great, run by Mercer’s daughter, Rebekah Mercer, gave $1.3 million to DonorsTrust in 2017, along with $250,000 to the Center for Security Policy.

The overlap between DonorsTrust donors and conservative political donors indicates the present-day Republican Party’s alliance with anti-Muslim, anti-immigrant, and anti-LGBTQ forces. From state legislators introducing anti-Sharia law bills written by the Center for Security Policy’s Gaffney to Trump immigration senior adviser Stephen Miller, the GOP has advanced the causes of far-right hate leaders. Without the generous donations of charitable nonprofits like the Bradley, DeVos, Mercer, and Scaife foundations, these hateful efforts could be blunted. Without the largesse of Charles Koch and like-minded megadonors, DonorsTrust would not be as powerful and central to the conservative political funding network.

DonorsTrust is a large donor-advised fund sponsor, taking in over $200 million in revenue and giving out $142 million worth of grants in 2018. But it’s by no means the largest DAF sponsor, nor is it among the biggest funders of hate groups.

As this author reported for Sludge, Fidelity Charitable Gift Fund, a DAF sponsor affiliated with but not legally connected to Fidelity Investments and the biggest charity in the U.S., gave $8.1 million to numerous hate groups, including some white nationalist organizations, from the 2014 to 2017 fiscal years. Because of its heavy funding of anti-LGBTQ groups, DAF sponsor the National Christian Foundation is possibly the country’s biggest nonprofit funder of hate groups.

The Council on American-Islamic Relations published a comprehensive report of the biggest funders of Islamophobia from 2014-16 and includes details on additional foundations such as the Adelson Family Foundation, Christian Advocates Serving Evangelism, and the Jewish Communal Fund.

Fidelity Charitable, Vanguard Charitable, and other mainstream, non-ideological DAF sponsors offer the same line when asked about their donations to hate groups: They pass along their client’s contributions to any 501(c)(3) nonprofit in good standing with the IRS, and it’s not their place to pass judgment on the nature of these recipients. But some philanthropists think otherwise. After Sludge’s reporting on DAF sponsors’ funding of hate, the Amalgamated Foundation launched the Hate Is Not Charitable Campaign, a coalition of roughly 80 philanthropic groups and individuals that plans to pressure DAF sponsors to develop anti-hate group policies.

It is “imperative that [charitable] contributions be used for charitable and educational purposes that promote the public good,” reads the campaign’s web page. “Using tax-deductible dollars to support hate groups undermines a shared value of democracy inherent to the logic of promoting the public interest. Promoting hatred is the opposite of public good.”

“Unfortunately, continued research will reveal more funding channels between mainstream charity and anti-Muslim hate groups,” said the Council on American-Islamic Relations’ Barzegar. “Thankfully, many leaders in the philanthropic sector are taking proactive measures to prevent their platforms from exploitation by these nefarious special interest groups. Hopefully, there will soon be a day when philanthropy becomes truly hate-free.”

Disclaimer: Koch-Favored DonorsTrust Keeps Funding Anti-Muslim and Anti-LGBTQ Hate Groups By Alex Kotch - Views expressed by writers in this section are their own and do not necessarily reflect Latheefarook.com point-of-view