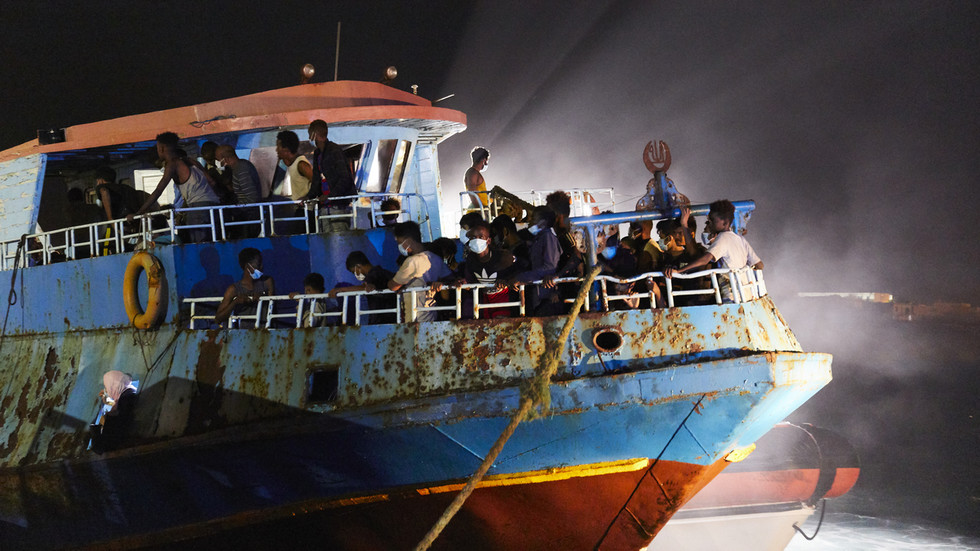 FILE PHOTO. A large fishing ship coming from Libya and just arrived in port in the night escorted by the Italian Coast Guard in Lampedusa, Italy. © Getty Images / Lorenzo Palizzolo

As European leaders focus on tougher border security to address mass migration from Libya, they are ignoring the main culprit for this problem: the destabilizing effect of EU foreign policy in a country already wracked by war.

Over the past week – mostly over the span of just a single day – 2,000 new migrants to Europe have crowded Italy’s first-entry point on the small island of Lampedusa, in and around a reception center that can only hold 200 people.

The migrants have come mainly from Libya, a country in focus as a target recipient of expensive, highly controversial EU migration-control funding. Yet, as European politicians again wrangle over what to do with the new arrivals, they ought to be considering how their unsustainable migration-control programs in war-torn Libya actually worsen the problem.

This controversy has come increasingly into the spotlight with the publication on Monday of an internal document of the EU’s Council of Ministers, released under a freedom-of-information request, that has revealed major fault lines among EU member states on how to deport the large numbers of rejected asylum seekers from Libya and other non-EU countries.

Detailing a January meeting of the IMEX (Expulsion) Working Party on the EU’s new proposals for returning “irregular migrants” to their countries of origin, the report recounts ongoing efforts by the European Commission to create the position of “return coordinator” liaising with Frontex, the EU’s border agency, to implement bloc-wide returns of illegal migrants whose asylum applications never materialize or are rejected.

Under the current proposals, an EU country could choose to fund the deportation of failed asylum seekers instead of taking them in, but if the deportations did not happen within eight months, that country would have to “transfer” the migrants to its own territory.

The report goes on to point out that “frontline member states,” which presumably include Italy, “considered that eight months was too long” for the time allotted to arrange the deportation of a failed asylum seeker in the EU, citing the argument that “only a shorter deadline can guarantee that they do not abscond.”

But the dangerous spiral of high-volume irregular migration coupled with complicated deportation enforcement really begins abroad, thanks to a single-minded EU obsession with curtailing migration rather than addressing its root causes. This thinking spurs EU officials to bribe authoritarian regimes under the guise of humanitarian aid, merely to stem the flow of migrants, while doing little if anything for their meaningful reintegration into their countries of origin.

Libya is now the burning fuse threatening to explode this misguided EU foreign policy into further cynical backlash over what to do about migration in domestic European politics. On the front line, Lampedusa’s mayor Salvatore Martello claims the Libyan government has “turned on the taps” in letting more migrants cross over to Italy, referencing the recent prevalence of “big dinghies and fishing boats” bringing 300 migrants or more each.  The steel-hulled boats, significantly larger and sturdier than the rubber dinghies in wide use earlier, require port clearance to embark on the Mediterranean Sea, which could indicate the complicity of Libyan authorities.

Further exacerbating this situation is the stark reality that several factions armed to the teeth are currently contesting full sovereignty over Libya, with migrants often held hostage to the resulting political and military hostilities. Rebel warlord General Khalifa Haftar currently controls a large swath of eastern Libyan territory, while in the west, Prime Minister Abdul Hamid Dbeibeh, leader of the Government of National Unity (GNU) nominally running Libya with UN endorsement, holds a seat of power in the capital, Tripoli. Although Dbeibeh has the official support of the EU, granular complexity emerges beneath the surface: France, for one, is alleged to be among the countries supporting Haftar militarily.

But the whirlpool of Libyan civil strife is immensely complicated by the running battle that Haftar, chiefly backed by the UAE and Egypt, is fighting with Islamist militias threatening his and the unity government’s bid for full authority – militias that are heavily involved in the illegal smuggling networks sending migrants to Italy.

If Martello’s accusations are true, they could point to the possibility of two warring sides both turning the spigot of migration on for different ends. The GNU might be trying to raise its price for the increased exertions in patrolling its coast, turning migrants back into Libya, and keeping them in a country suffering under enormous humanitarian strains.

As part of EU foreign-aid schemes, 700 million euros have gone to Tripoli over the past several years, some of it paid to equip and train the Libyan coastguard to return migrants attempting a sea crossing to Europe, and some paid to keep the returnees in Libyan detention centers. Since 2017, the Tripoli government has been implementing its side of the deal, but with an economy that contracted by over 30% amid the ravages of Covid-19 in 2020, Dbeibeh may think playing the migration card is a way to obtain an economic stimulus from Brussels – via foreign aid – that cannot be obtained elsewhere.

The Islamist militias threatening both Dbeibeh and Haftar, however, may themselves be escalating the migration outflow for their own designs, and in doing so they have a powerful motive. According to Italy’s intelligence service, 70,000 migrants-in-waiting in Libya are gearing up to attempt the Mediterranean crossing into Europe, with the new arrivals from Libya to Italy having already tripled from roughly 4,000 in the first part of 2020 to 13,000 in the first part of 2021. That type of demand creates opportunity and leverage for the militia-controlled smuggling networks on the Libyan coast.

As the militias have seen their interests marginalized by the government in Tripoli, keeping their migrant-smuggling operations going at full tilt has become a means not only of revenue but also of political protest – an attempt to erode the legitimacy of a government that, with millions in EU aid money, is supposed to be bolstering “the protection and assistance of migrants, refugees, and internally displaced people” yet has little to show for it.

Still, Brussels keeps focusing on returns, but not real amelioration of the security situation that has caused migrants to flee. Once illegal migrants are returned to Libya with EU funding and assistance, European concern largely ends there, even though subsequently many returnees face unlawful detention, torture, starvation, and even slavery, in a vortex of human-rights abuses which all sides in the conflict have been accused of perpetrating – giving the migrants more of a reason than before to attempt the crossing into Europe again.

Many of the ‘migrant detention centers’ in Libya for returnees, supported by part of the 455 million-euro EU Emergency Trust Fund for Africa, have actually been little more than prisons on militia bases, where detained migrants have sometimes been forced at gunpoint to manufacture weapons for their Islamist captors.

One such center in Tajoura was hit by a Haftar-ordered airstrike in 2019 that killed over 50 migrants, even though the Libyan general knew in advance the coordinates of all detention centers in the country, thanks to information supplied to his forces by the International Organization for Migration. Yet, even after the airstrike, returnees were still sent to Tajoura under the aegis of EU aid funds.

In the EU, domestic grabs to take advantage of the situation politically and efforts to streamline deportations can help rally voters, but they stop short of remodeling the root of the problem.

Citing a 9% decline in the Italian economy in 2020 caused by the pandemic, League party leader Matteo Salvini has argued for stricter border-control measures from Italian Prime Minister Mario Draghi, leader of the coalition government in which the League is a member. “With millions of Italians in economic difficulty, we cannot look after thousands of clandestine migrants,” he said.

Giorgia Meloni is attempting to outflank her rival Salvini on the Italian right, having demanded a “naval blockade” to halt the operations of migrant smugglers off the Libyan coast.

Even Michel Barnier, the EU’s former lead Brexit negotiator, has entered the fray in a bid to help the center-right Les Republicains in forthcoming French elections by calling on the EU to “suspend immigration” from non-EU countries for up to five years.

But promoting stricter migration control policies at home while funding authoritarian elements to pick up the slack on that policy abroad has already contributed to a human rights fiasco in Libya. It is easy for European politicians to score political points by playing up the border security implications of the dilemma. It is tougher, but more necessary, for them to examine the ways in which the EU’s foreign policies have fed the migration crisis – placing returned migrants in a Libyan security quagmire so severe that braving the perilous journey to Lampedusa is deemed less dangerous.

Disclaimer: Migrants will keep coming from Libya to Europe in huge numbers unless the EU rethinks its misguided foreign policy - Views expressed by writers in this section are their own and do not necessarily reflect Latheefarook.com point-of-view