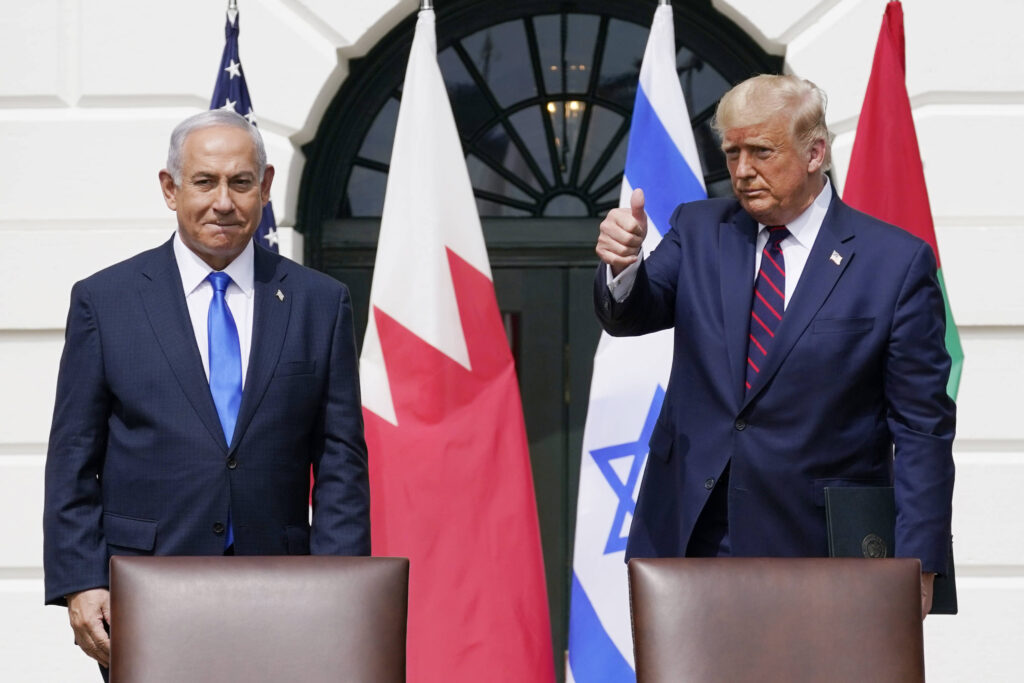 Last September, President Donald Trump was exultant. Accompanied at the White House by Israeli Prime Minister Benjamin Netanyahu and senior leaders from Bahrain and the United Arab Emirates, Trump hailed the normalization of ties between Israel and the two Gulf monarchies. The agreements were lumped under the grandiose title of the “Abraham Accords,” a nod to the promise of coexistence and shared prosperity in the birthplace of three great religions.

“We’re here this afternoon to change the course of history. After decades of division and conflict, we mark the dawn of a new Middle East,” Trump said from the White House balcony, adding that the agreements would “serve as the foundation for a comprehensive peace across the entire region.” In the following months, both Sudan and Morocco entered their own processes of normalization with Israel.

But the gambit from its inception was met with plenty of cynicism. Neither the UAE nor tiny Bahrain was ever at war with Israel. They already maintained numerous channels of clandestine cooperation with the Jewish state. The agreements they signed, as would later be the case with Sudan and Morocco, came with significant geopolitical sweeteners from the Trump administration. And as nondemocratic states, their ruling elites could not claim to even represent the abiding views of their small numbers of citizens, let alone the critical mass of regional public opinion.

Yet the accords were cast as “a pivot of history,” as Netanyahu put it in September. The monarchs had opted to dispense with nearly two decades of Pan-Arab consensus on Israel by normalizing ties before a meaningful conclusion to the Israeli-Palestinian conflict was reached. Their decision reflected a real political exhaustion with the Palestinian cause on the part of some political elites in Arab countries, who are more concerned about the new challenges posed by the Iranian regime or political Islamists such as the Muslim Brotherhood than the old struggle of the Palestinians. Supporters of the agreements claimed the “comprehensive peace” Trump promised would emerge because of the greater leverage governments like the UAE would now have over both the Israelis and the Palestinians.

Now, with Trump gone and Netanyahu only barely clinging to power, regional politics may already be pivoting away from the Abraham Accords. For all the happy optics of Emiratis vacationing in Tel Aviv and Israelis partying in Dubai, no new countries have joined on since the initial flurry under Trump. While the Biden administration welcomed healthier relations between Israel and the Arab world, it’s unclear how much it intends to build on Trump’s major foreign policy initiative. President Biden delayed his direct outreach to Netanyahu upon taking office; the first Middle Eastern leader that he spoke to was Jordan’s King Abdullah II, whose country is far more directly involved in the Israeli-Palestinian conflict than the Gulf states. Relations between Jordan and Israel are also at a low ebb, a reflection, in part, of Trump and Netanyahu’s bruising disregard for Jordan as a traditional gatekeeper for Palestinian concerns.

Then came this week’s spasm of violence between Israelis and Palestinians, triggered after weeks of unrest and clashes in Jerusalem. On Tuesday, militants in the blockaded Gaza Strip launched one of the largest salvos of rockets ever fired into Israel, killing at least three people.

“The onslaught was even fiercer in Gaza, where Israel waged one of its most intense air campaigns since a 2014 war engulfed the sides for more than a month,” my colleagues reported. “The Israeli military said it struck more than 500 targets in retaliation for the rocket attacks from Gaza. By Tuesday evening, the Palestinian Health Ministry said the strikes had killed 30 Gazans, including 10 children, and injured about 200 others.”

The escalation followed spiking tensions in Jerusalem, where recent marches of far-right Jewish supremacist groups, an Israeli push to evict Palestinian residents in the East Jerusalem neighborhood of Sheikh Jarrah and brutal crackdowns by Israeli security forces on Palestinian protesters all laid the tinder for a far bigger spark. The unrest spread to cities outside the occupied territories, as Palestinian citizens of Israel rallied in support of their brethren.

In this maelstrom, even the Arab countries that normalized relations with Israel are loosening their embrace. Both the UAE and Bahrain condemned Israel’s storming of the al-Aqsa Mosque, considered the third holiest site in Islam, this past weekend, as well as its moves to kick dozens of Palestinians out of their homes in Sheikh Jarrah. Social media in both countries saw a surge of hashtags in support of their Arab compatriots in the Jerusalem neighborhood.

Following a virtual meeting of the foreign ministers of the Arab League on Tuesday, Morocco’s top diplomat condemned the “hateful” rhetoric and actions of the far-right Jewish groups involved in the violence in Jerusalem. The bloc, long derided for inaction, said it would exert more pressure on behalf of Palestinians at the United Nations and at the International Criminal Court, whose chief prosecutor in March launched a formal investigation into alleged Israeli war crimes in the occupied territories.

Anwar Gargash, a prominent Emirati diplomat who has in the past been outspoken in his criticism of Iran, tweeted his solidarity with Palestinians, “with the end of the Israeli occupation, with the two-state solution, and with an independent Palestinian state with East Jerusalem as its capital. This is a historic and principled position that does not budge.” The governments of Oman, Qatar and Saudi Arabia all issued statements on similar lines, affirming their support for a Palestinian state along 1967 borders with East Jerusalem as its capital.

That’s a traditional line that Arab governments often invoke whenever Israel-Palestinian violence flares. But it’s more conspicuous now as it flies in the face of the “vision for peace” unfurled by the Trump administration with Netanyahu’s blessing last year, which plotted a vague, shrunken future Palestinian state with limited sovereignty and no capital in Jerusalem proper. In the view of the Trump administration, the Abraham Accords would speed a realignment of regional politics, one in which Arab countries friendly to both Israel and the United States would discard their concerns for the Palestinians in favor of greater trade and security cooperation with Israel.

Now, though, thanks in part to provocations from the ascendant Israeli far right and what Jerusalem-based journalist Noga Tarnopolsky described as Netanyahu’s opportunism, the plight of the Palestinians is front and center in the global political conversation. “You have to wonder why would Israel turn the dormant Palestinian issue into a raging crisis,” observed Vali Nasr of the School of Advanced International Studies at Johns Hopkins University. “Israel’s entire strategy with Abraham Accords was based on the argument that the Palestinian issue was no longer relevant. Now thanks to a series of Israeli mistakes it is back in force.”

Disclaimer: The Abraham Accords have already become a Middle East afterthought By Ishaan Tharoor - Views expressed by writers in this section are their own and do not necessarily reflect Latheefarook.com point-of-view