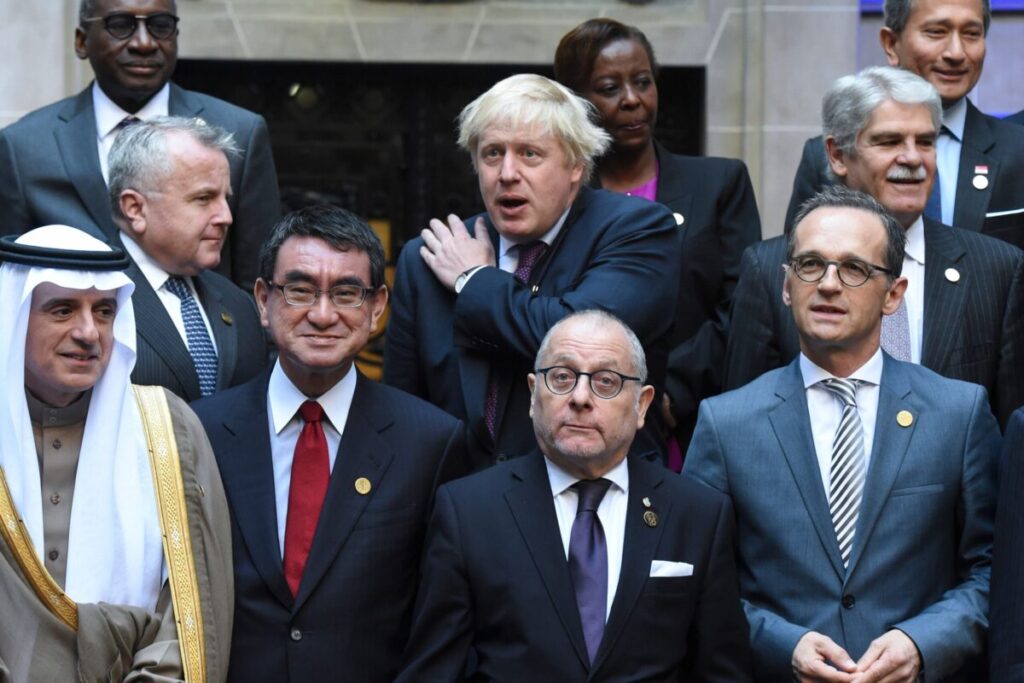 Then British Secretary of State for Foreign Affairs Boris Johnson (C) gestures next to United States Deputy Secretary of State John Sullivan (L), during a family photo within the G20 foreign ministers’ meeting at the Palacio San Martin in Buenos Aires, on May 21, 2018 [EITAN ABRAMOVICH/AFP via Getty Images]

A week has passed since Israeli forces attacked innocent worshippers in Al-Aqsa Mosque — the third holiest site in the Muslim world —using rubber-coated metal bullets, tear gas and stun grenades. Yet the silence of British Prime Minister Boris Johnson is deafening, despite the numerous human rights violations inflicted upon the people of Palestine before, during and after the holy month of Ramadan. The Palestinians have been suffering under Israeli occupation in Gaza since 1967 when Israel seized the territory, but the violence, military offensives and ethnic cleansing have been constant for decades, with at least 3,000 Palestinian children killed to date.

Over the past week we have seen harrowing images of Palestinians facing police brutality at Al-Aqsa Mosque; forced displacements in Sheikh Jarrah, and racist abuse hurled at them. Heartbreaking images of those killed are all over social media, including children, while other youngsters cry for their parents who have been killed by Israeli bombs and missiles. Boris Johnson has opted to stay silent, apart from a vague message on Twitter urging both sides to “step back from the brink” and “show restraint”. He has failed to acknowledge the disproportionate attacks launched by Israel against the Palestinians as one of the world’s leading manufacturers of military weapons. As Israel intensifies its crackdown into Gaza, at the time of writing at least 188 Palestinians have been killed, including 55 children. Not even they are spared from the bloodshed. Israel can and does act with impunity; Western leaders are unwilling to call out their Israeli ally for the numerous human rights violations it has inflicted on the people of Palestine. This is what frustrates me the most.

Britain’s Foreign Secretary Dominic Raab issued a one-sided statement conveniently ignoring the bloodshed that has been taking place in Palestine and instead condemned the rockets fired by Hamas into Israel. “The UK condemns the firing of rockets at Jerusalem and locations within Israel,” said Raab, who called for both parties to “de-escalate”. There was no acknowledgement of the horrific and indefensible Israeli attacks on innocent Palestinian civilians. Raab’s boss Johnson can quite rightly condemn attacks on places of worship around the world, but we have to ask why he has not issued a single statement condemning the attacks on worshippers in Al-Aqsa Mosque or the hugely disproportionate use of force against Palestinian civilians.

OPINION: Do the Palestinians not have the right to defend themselves?

To add yet more insult to injury, many other world leaders have opted to make statements that completely ignore the fact that Israeli forces attacked Palestinians in their own place of worship. Instead, they tried to make the Hamas rockets the issue, as if they were the cause of the whole problem. They aren’t; the Israeli occupation is.

Moreover, US President Joe Biden has claimed that “Israel has a right to defend itself”, but he has failed to acknowledge that Palestinian worshippers were attacked during the holy month of Ramadan, in a mosque; that children and women have been killed; and that Palestinian families in Sheikh Jarrah have been forcibly removed from their own homes to make way for illegal Jewish settlers. Biden also failed to point out that the US has sent military aid worth over $3 billion to Israel, some of which was used to build bomb shelters for Israeli civilians, but where do Palestinians run to when their homes, children, families and loved ones are being bombed? Where are the Palestinian shelters? Such facts are ignored so easily by leaders in the West, but this throws the spotlight on the fact that the Palestinians do not have equal rights under the imposed rule of the “only democracy in the Middle East”, the colonial state of Israel. That it is, as Human Rights Watch and B’Tselem have concluded, an apartheid state.

Violence in all forms is unacceptable, but world leaders cannot talk about the Palestinians as if this is a conflict between equals; it is an asymmetric struggle between an occupier and the occupied; an oppressor and the oppressed. Palestinian civilians bear the brunt of numerous human rights violations and war crimes, yet Western leaders and a compliant mainstream media play along according to a one-sided narrative in favour of Israel. Even a cursory glance at the Western mainstream media reveals words such as “clashes” disguising Israeli assaults, and headlines that focus on rockets fired towards Israel rather than the cause of the violence. Where were the “Breaking news” banners in the mainstream media outlets when Al-Aqsa Mosque and the worshippers were attacked? The general media response was very low key until the Palestinians said enough is enough and fought back.

Muslim countries in the Arab world must shoulder some of the blame when it comes to the suffering of the Palestinians. Although they eventually condemned the attacks at Al-Aqsa, Saudi Arabia and the UAE, for example, are part of the normalisation movement to develop ties with the occupation state in an effort to make peace. The UAE signed a formal agreement with Israel last August to this effect. I would suggest that the “Abraham Accords” have added to the severity of attacks against the Palestinians by giving Israel a degree of political and diplomatic cover from Palestine’s neighbours. 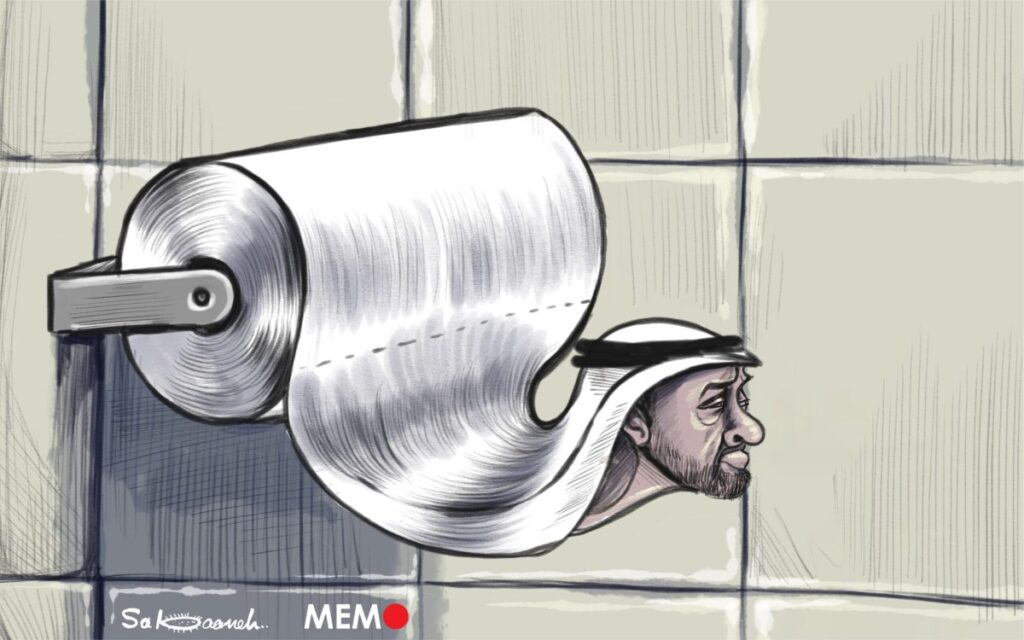 The Arab world needs to wake up and speak out in defence of its brothers and sisters in Palestine. Turkey and Pakistan are amongst the Muslim countries that have denounced Israel’s oppression, but the Arab states which have signed trade deals with Israel worth $4 billion have significant leverage which is not being used. The UAE could call for an end to the occupation and the escalating violence. However, both Abu Dhabi and Riyadh are choosing only to condemn Israel but not take steps towards a peaceful and just solution. This is unacceptable. If the Muslim world was united, Palestinians would never have to endure such hardship and suffering as they are having to do today. It is shameful that those in power, who have the ability to stand up against such injustice, choose instead to put their political and economic agendas ahead of accountability.

READ: Warnings of ‘terrible massacre’ planned by Israel against journalists

At a time when we cannot rely on those who have the power to make a change to save innocent Palestinian civilians, it is up to the international community to rise to the challenge. It was heart-warming to see our Jewish brothers and sisters come out in support of Palestine at the recent protests held in New York and London, reiterating the fact that this is nothing to do with religion; this is about calling out oppression. It is a fact that Palestinian Christians are also oppressed by Israel; we should not forget that. Instead, we must unite for justice for all of those who are oppressed. The deafening silence and double standards must be exposed so that world leaders can address the reality of the situation in a bid to create long-lasting change for Palestinians who are demanding that their basic human rights are upheld.

Disclaimer: The West's deafening silence and double standards as it ignores the Palestinian struggle by Tasnim Nazeer - Views expressed by writers in this section are their own and do not necessarily reflect Latheefarook.com point-of-view