When video evidence emerged late last month showing Indian fans shouting “death to Pakistan” after a cricket match between the two rivals in the Asia Cup, the rather important detail of who was shouting what was absent from both local media and a BBC report.

Instead, the reports used terms such as “racist and hateful chanting”. Police statements were quoted verbatim, and the only comment from an external actor came from the Federation of Muslim Organisations. One reader commenting on the coverage felt that the reporting implied it was Muslims committing the violence.

Like the reporting from Leicester, the use of factual but incomplete descriptions leaves open the question of who the perpetrators and victims are

The provocation has since intensified this weekend with a Hindutva-inspired march of around 200 men mostly in balaclavas echoing the anti-Muslim tactics inspired by the racist actions of the English Defence League in the not-too-distant past. The shouts of “Jai Shri Ram“, a Hindu chant that became “a murder cry” in India, were audible and illustrative of what has plagued and continues to haunt Muslims in India.

Remarkably the main BBC News report on this made no mention of the slogans being chanted or the ideology of those marching. It took a Muslim news organisation to investigate and document just what has been taking place in Leicester, as Muslims face increasing violence at the hands of Hindutva-inspired gangs.

Earlier this year, a Muslim youth was reportedly attacked with baseball bats by around 30 assailants affiliated with the fascist Rashtriya Swayamsevak Sangh (RSS) ideology of India’s elected government. Tearful mothers have given testimony on what their families have suffered as a result of attacks they feel have been ignored by police, with the perpetrators still at large. The modus operandi of these gangs is eerily similar to the vigilante attacks on Muslims in India, which have been communal in nature.

The “lack of action” from police, which authorities deny, has been given as a reason by some Muslims in the city for organising against this new wave of attacks. On Sunday, a police statement said: “We are continuing to call for dialogue and calm with support from local community leaders. We will not tolerate violence or disorder in our city. A significant police operation will remain in the area in the coming days.”

Leicester is one of the UK’s great melting pots: more than 70 languages are spoken, and it is believed to be the first British city where the white population is a minority. Inter-community relations among immigrant populations have generally been good over the years. So what is happening now?

Some have blamed a recent influx of immigrants infused with Hindutva nationalist ideology from India, where Muslims are reportedly facing genocidal conditions. But as others have documented, the spread of Hindutva ideology in the UK took place long before Narendra Modi came to power, with Leicester becoming one of the key sites for spreading this ideology.

While it would be radically overstating matters to say that Leicester’s Muslims are facing anything akin to their brethren in Prime Minister Narendra Modi’s India, the ill winds of Hindutva-inspired Islamophobia among certain sections of the British Hindu community have been documented and demonstrated.

As one British journalist noted: “There is definitely a growing problem of bigotry against Muslims among Hindus. It’s spreading from India to the West.”

This has manifested itself in British politics, with the Indian BJP’s UK supporters reportedly campaigning for the Conservative Party in 48 constituencies during its victorious 2019 election. One Conservative MP even invited a Hindu nationalist to speak at an event in the House of Commons, and has become their “chief spokesperson” in parliament.

The Labour Party’s response to this shift has apparently been to realign its long-held position on Indian-occupied Kashmir. From self-determination for its beleaguered people, Keir Starmer’s Labour now sees Kashmir as a bilateral issue for India and Pakistan.

Just this week it took coordinated action of concerned citizens and civil society groups to force the Home Office to revoke the visa of Hindutva right-wing preacher Sadhvi Ritambhara, known for her anti-Muslim and anti-Christian hate speeches as well as being a prominent cheerleader during the demolition of the Babri Masjid by Hindu mobs in 1992. Noticeably she was due to speak in several Hindu temples across four UK cities.

The belligerence of Hindutva activists in the UK has also manifested in the mainstream media. The Independent recently removed an editorial from a Hindu woman on the bigotry she saw against Muslims, after the author reportedly received threats. Noticeably, the free speech brigade that has been so active in defence of anti-Muslim speech has remained silent on such intimidation.

Some Hindutva conspiracy theories have even found space on British news sites, including the absurd “flood jihad” allegations, wherein Muslims in India’s northeastern state of Assam were accused of causing devastating floods. The “love jihad” conspiracy theory, which claims that Muslim men are trying to convert Hindu women through marriage, has also gained attention in the mainstream British media.

The coverage of events in Leicester, although brief, reveals another disturbing trend on the reporting of right-wing Hindu violence against Muslims: namely, characterising pogroms and vigilante violence as a two-sided conflict of equals. When reading some of the coverage alongside other Islamophobic media reporting, the question arises: are Muslims allowed to be victims? 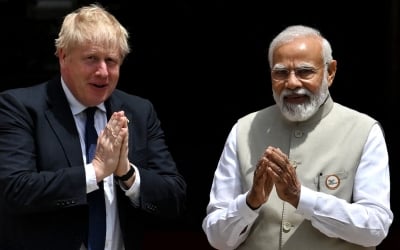 Analysis of British and international media coverage of India suggests not. The Centre for Media Monitoring has shown the repeated omission of Muslims as targets. Like the reporting from Leicester, the use of factual but incomplete descriptions leaves open the question of who the perpetrators and victims are.

During the February 2020 attacks on Muslim protesters in Delhi, independent journalists documented that Hindutva mobs were aided by Indian police, “who either actively participated in or did nothing to prevent the attacks”, the centre found. Dozens of articles called the events “riots”, while only a handful clearly explained the nature and context of the attacks.

Other examples include a Hindu mob throwing stones and blocking highways after rumours spread that Muslims were slaughtering cows for meat, headlined as “religious tensions”. Amid the anti-Muslim pogroms launched by Hindutva nationalists in Delhi in 2020, one commentator described how “the Muslim quarter of the capital exploded into violence”.

In the context of Hindutva attacks on Indian Muslims, the language of “clashes”, “riots” and “communal violence” is at best misleading – and at worst false. Despite the best efforts of the media and other institutions in two-siding the issue, it seems clear who are the provocateurs in this case. As a prominent Indian commentator writes, the “Indian disease has spread to the UK”.

Disclaimer: Leicester riots: Are Muslims ever allowed to be victims in UK media? by Faisal Hanif - Views expressed by writers in this section are their own and do not necessarily reflect Latheefarook.com point-of-view