“It’s not Islam that is in crisis. It is Macron and his government”  says Columnist Malia Bouattia

A   history teacher in France, Samuel Paty, 47, who showed his class caricatures insulting Prophet Mohammed (PBUH) was beheaded by an enraged Muslim. The attacker was killed by the police.

President Emmanuel Macron of France quickly responded to rein in the influence of Islam and help develop an “Islam of France” compatible with the nation’s republican values.

Macron said that the influence of Islamism must be eradicated from public institutions .Crucially, Mr. Macron’s announcement came as France’s political establishment gears up for the next presidential election in 18 months.

Yet his speech also addressed a deep-rooted problem in French society: its enduring failure to integrate significant parts of its large, nonwhite, Muslim population of immigrants and their descendants. This has contributed to a growing inequality in France

France has one of the largest number of Muslims in the Western world primarily due to migration from its former colonies in North Africa. The Muslim population of France is around 5,760,000 or 8.8% of the total population.

“A wide majority of Muslims are only asking right to normality, to practice their faith without pressure”.However persecution of Muslims has been an on going game .Interior Minister Darmanin revealed that French authorities have shut down 73 mosques, schools, shops, and coffee houses since January 2020. 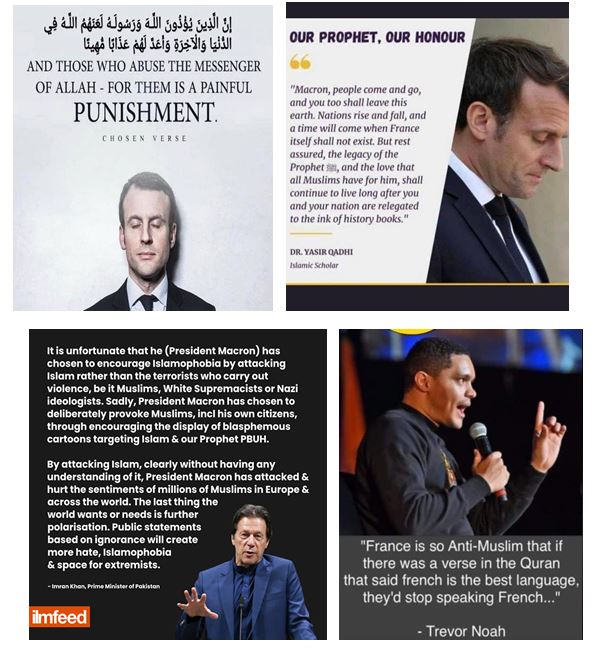 Columnist Malia Bouattia said “it’s not Islam that is in crisis. It is Macron and his government”.

She said it also serves to distance himself from the 5.7 million French Muslims who will be impacted by his policies. He has no interest in addressing their struggles, their disproportionate presence in socio economically marginalized neighborhoods, their discrimination within education or employment, or their brutalization at the hands of the state. His political agenda has amplified all of these issues; it is in his interests and those of his political base to continue this.

Joseph Massad, Professor of Modern Arab Politics and Intellectual History at Columbia University in New York said; hatred of Muslims is part of everyday speech by the French government, the pundits, and the media.

In fact, the normalization of hate speech against Muslims not only legitimizes the institutionalized discrimination to which French Muslims are subjected, but also  Outside France, the terrorist who committed the 2019 massacre at the Christchurch mosques in New Zealand, killing 51 Muslim worshippers and wounding 49, cited the murderous theories of the Islam phobic French thinker Renaud Camus as influencing his actions.

The so called call to liberate Islam is an old French “secular” tradition. When Napoleon Bonaparte invaded Egypt and Palestine in 1798, his clever plan was to lie to the Egyptians by announcing that he and his army were “faithful Muslims” and that they came to liberate Muslims and Islam from the tyranny of the Mamluks.

The invasion was launched in mid-June 1830 and Algiers fell on 5 July. The financially struggling France robbed Algiers’ treasury clean, stealing upwards of 43 million Francs in gold and silver, aside from the sums that disappeared and those that were spent on the French occupation army.

The conquering French army took over mosques and converted them into churches and cathedrals at gunpoint, including the largest Ottoman Ketchaoua mosque in Algiers, built in 1612, which was converted into the Cathedral of St Philippe in December 1832.

That same year the French wiped out the entire tribe of the Ouffias, sparing no woman or child, and seizing all their possessions.

In 1871, Algerian Muslims revolted again against French rule .The French genocidal machine responded by killing hundreds of thousands, which, combined with the French-caused famine deaths in the late 1860s, resulted in the death of one million Algerians   The French razed dozens of towns and villages to the ground while eliminating the entire elite of Algerian society. But even that did not resolve France’s “crisis” with Islam.

The ongoing institutionalized discrimination by the French state against its Muslim citizens shows no signs of abatement under Macron. France continues to be submerged in a dominant discourse of chauvinism and hate today that is not dissimilar to the one that always dominated French culture even before the French Revolution.

In a statement issued in Kuala Lumpur  well known Malaysian politician Dr Anwar Ibrahim, President, People’s Justice Party of Malaysia, has told some home truths to Marcon’s about his shameful and disgusting attitude towards Islam and Muslims.

Disclaimer: French hatred towards Muslims institutionalised By Latheef Farook - Views expressed by writers in this section are their own and do not necessarily reflect Latheefarook.com point-of-view