Skip to content
International
Spread the love
Headed to the quarter-finals after an unprecedented run, the North African team has come to represent something bigger than football
Morocco’s Jawad El Yamiq celebrates after the World Cup round of 16 soccer match between Morocco and Spain, at the Education City Stadium in Al Rayyan, Qatar, on 6 December, 2022 (AFP)
After a tense two hours, Morocco defeated Spain in a penalty shootout on Tuesday to seal their historic passage to the World Cup quarter-finals. The Atlas Lions have become the first Arab nation to ever reach this stage of the tournament and only the fourth African team, after Cameroon in 1990, Senegal in 2002 and Ghana in 2010.

This tournament was always going to be remembered as the ground-breaking first World Cup to be held in the Middle East, but now it has the added distinction of an Arab nation achieving unprecedented sporting success.

Morocco’s progress to the last eight of this tournament has been far from easy. The last time they won a game at a World Cup was 24 years ago in Saint-Etienne, France, when they beat Scotland 3-0. This time around, they have already defeated two teams positioned higher than them in the Fifa rankings: Belgium (ranked second) and Spain (seventh). Morocco, ranked 22nd, also came away with a draw against fellow quarter-finalists Croatia (12th).

The euphoria that greeted Morocco’s advancement reverberated far and wide across the region, from Agadir to Amman, alongside colourful celebrations in Amsterdam, Brussels, London and Paris. Similar festivities followed Saudi Arabia’s unexpected victory over Argentina on 22 November.

Such displays of joy and unity have transcended the political disputes that have long divided Arab nations and – perhaps even more surprisingly – longstanding sporting rivalries across North Africa.

There is much to admire about this team and manager Walid Regragui that goes beyond their success on the field. This shared pride in Morocco’s achievement across the Middle East and beyond should thus come as no surprise.

Several Moroccan players have been seen carrying the Palestinian flag after victories. While fans in the stadia have also raised flags in solidarity with Palestinians, the symbolism of footballers doing so on the pitch after a game is hugely significant.

By displaying the Palestine flag at the height of celebrating a career highlight with fans, the Moroccan team has centred the Palestine issue in the collective hearts and minds of people around the region. As Riyad Mansour, Palestine ambassador and permanent observer to the United Nations, said: “The winner of this World Cup is already known: it is Palestine.”

In 2021, footballers in the UK faced scrutiny and even criticism from some quarters for doing the same thing, be it Paul Pogba and Amad Diallo on the pitch at Old Trafford, or Hamza Choudhury and Wesley Fofana at Wembley. The fact that the North African team has come to represent something bigger than football – and is prepared to stand by these convictions – has elevated its popularity and status outside of Morocco.

In addition, visible and sincere displays of Islamic worship have endeared the team to Muslims around the world, from players cupping their hands in pre-game supplication, to post-goal celebrations where players have prostrated in thanks, to Quran recitation prior to the penalty shootout against Spain. 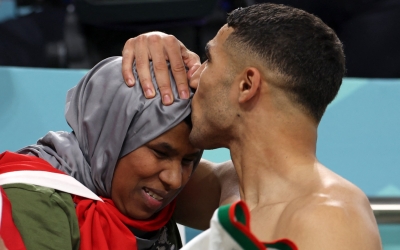 After years of rising intolerance and discrimination against Muslims, particularly in the West, this confident and resolute show of faith and identity on a global stage has been incredibly heart-warming and compelling.

Another factor that has endeared this Moroccan team to fans across the Arab and Muslim world has been the touching scenes involving their families. At the instruction of Regragui and Morocco’s football federation, family members of the squad were treated to an all-inclusive trip to Qatar and have been staying at the team’s base in Doha’s West Bay area.

In stark contrast to the usual camera shots of players’ glamorous partners in the stand, we’ve seen endearing scenes of star player Achraf Hakimi embracing his mother after the Belgium and Spain games, and similar scenes between Regragui and his own mother.

These scenes have particularly resonated across the Arab and Muslim world, but the sacrifice of parents for the sake of their children cuts across nationality, race and religion. Hakimi has previously spoken about his parents’ role in his success: “My mother cleaned the houses and my father was a street vendor. We come from a modest family that struggled to earn a living. Today, I fight every day for them. They sacrificed themselves for me.”

On the pitch, there is also much to like about this team. They have the best defence out of the remaining teams, conceding only one goal throughout this World Cup. Their resilience in defence is matched by the individual brilliance of some of their stars, such as Hakimi and Hakim Ziyech.

Fourteen of their 26 players were born outside the country, the highest proportion for any team in Qatar. This has proven to be a strength, as the Atlas Lions have combined the creativity and flair of Arab football with the tactical competitiveness of the European game. It has also increased their relatability, not just for fans in the Middle East, but for diaspora communities across Europe.

It’s worth noting that this is by design and not a happy accident. In 2014, a campaign called “Bring back talents belonging to the soil” was launched by the Moroccan football federation to tap into the prospects emerging out of the approximately four-million-strong diaspora community.

The culmination of these efforts was seen on Tuesday night, as a player born in the suburbs of Madrid confidently dinked in a penalty to send his country of birth crashing out of the tournament.

Amid all of this, it is easy to forget that Regragui is still within the first 100 days of his tenure as head coach. In guiding his team through to the quarter-finals of the World Cup, he has created his own piece of history, becoming the first African manager to guide an African nation to this stage of a World Cup.

His management of personalities has been just as artful as his tactical brilliance. Reintegrating Ziyech, who was ostracised under Regragui’s predecessor, has paid off in spades.

Morocco now has a date with destiny on 10 December against Portugal, with more history to be made if they can reach the semi-finals. This set of players and their manager have already immortalised themselves as legends and sporting icons, but even more importantly, they will be remembered for defiantly showcasing their values and identity with confidence and splendour.

Disclaimer: Joy, faith and Palestine: How Morocco's team united the Arab world by Mostafa Mohamed - Views expressed by writers in this section are their own and do not necessarily reflect Latheefarook.com point-of-view