Skip to content
International
Spread the love
A woman wears the American flag as a headscarf for World Hijab Day, at City Hall in New York on 1 February 2017 (AFP)
India has highest rate of abuse, with Twitter ‘drastically failing’ at removing anti-Muslim content, says report

Nearly 86 percent of anti-Muslim posts on social media come from the US, the UK and India, a report by the Australian-based Islamic Council of Victoria (ICV) has found.

The report, Islamophobia in the Digital Age, states that in India, the rampant Islamophobia is a result of the ruling Bharatiya Janata Party’s (BJP) normalisation of hatred against Muslims. In the US, though, Islamophobia has long been a problem, one that “was dramatically exacerbated by the racist, conspiratorial and inflammatory rhetoric employed by Donald Trump”, the report states.

As for the UK, the prevalence of anti-Muslim tweets was attributed to a multitude of factors, including the global reach of Trump’s hatred, the country’s longstanding issues with anti-migrant sentiment, and the casual racism of former Prime Minister Boris Johnson, the report wrote.

According to the ICV, there were at least 3,759,180 Islamophobic posts made on Twitter between 28 August 2019 and 27 August 2021. After nearly one year, 85 percent of the hateful tweets were still online; only 14.8 percent were eventually removed, either because they had been hidden through privacy settings, taken down by users, or deleted by moderators. 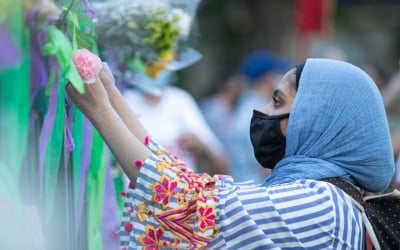 “We conclude from this that Twitter is drastically failing at removing anti-Muslim content,” the report noted. “This is unsurprising given that they do not automatically screen posts for hate, but rather only act once a report has been filed. In practice, however, even when Islamophobia is brought to their attention, a mere 3 percent of flagged tweets end up being removed.”

The top three common themes that were observed in the anti-Muslim tweets included: the association of Islam with terrorism, the depiction of Muslim men as perpetrators of sexual violence, and the fear that Muslims wish to impose sharia law on others.

Other types of tweets included conspiracy theories that Muslims are being sent as migrants to out-reproduce non-Muslim communities, the targeted harassment of Muslim public figures, and the characterisation of halal slaughter as inhumane.

When there is a terrorist attack in the West, anti-Muslim hate is more likely to be prevalent online than it is following attacks committed elsewhere, the report found. When more than 50 people were beheaded in Mozambique, there were 6,264 recorded anti-Muslim tweets. After the London Bridge stabbing, there were over 10,000.

‘In the event that no changes are made, it is all the more likely that the problem of online Islamophobia will grow to a point of intractability’

The report also found that how politicians respond to events connected to Islam can have an impact on Islamophobia. It was found that the third largest spike in anti-Muslim tweets on 25 February 2020, for example, was a result of hateful remarks by the BJP against Muslim opponents of its Citizenship Amendment act.

In August, it was found that hate crimes against Muslim communities across Canada increased by 71 percent in 2021, according to a newly released report by the government agency Statistics Canada.

The study found that the number of recorded attacks against Muslims rose from 84 incidents in 2020 to 144 in 2021. The jump followed a decline from the previous year, when in 2019 there were 182 reported incidents targeting Muslims.

To combat this hatred, the ICV recommends a number of steps, such as introducing penalties for platforms that fail to act to prevent Islamophobia and pressuring the Indian government to end anti-Muslim rhetoric.

ICV suggests that Twitter should end the policy of not screening tweets and should automatically detect and remove hateful content. It also recommends that Twitter establish an independent oversight body to evaluate the effectiveness of its moderation policies.

“Indeed, in the event that no changes are made,” the report states, “it is all the more likely that the problem of online Islamophobia will grow to a point of intractability.”

MEE reached out to Twitter for comment but had received no response by the time of publication of this article.

Disclaimer: Majority of anti-Muslim Twitter posts come from US, UK and India - Views expressed by writers in this section are their own and do not necessarily reflect Latheefarook.com point-of-view