Late Dr. A.C.S. Hameed entered Sri Lankan legislature in March 1960, Representing Harispattuwa constituency, in the Central Province.   He had been in Parliament winning 8 elections for a continuous period of 39 years from 1960 to 1999. 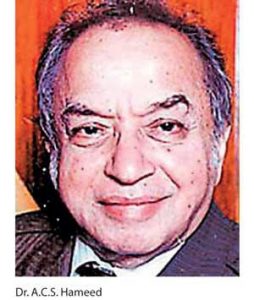 This was one of the longest unbroken Parliamentary records of a member of the U.N.P.  He passed away on September 3, 1999 after a short illness.

Late Dr Hameed was a Muslim representing Harispattuwa which was a predominant Buddhist constituency. He built Baudda-Balamandalaya, Mosques, and Hindu Temples in his electorate.

He joined the 34 villages of the electorate, with motorable roads, electricity, and drinking water. He built the Seemamalakaya in Harispattuwa overlooking the Mahaweli river which is the second Seemamalakaya in the country.

Late Dr. Hameed became the first Foreign Minister in Sri Lanka in 1977. This portfolio, was held by the Head of Government of Sri Lanka from 1948 to 1977. He was the chairman of Non-aligned Ministerial Conference from 1977 to 1979, when contentious issues between members in the movement emerged and many severe challenges had to be faced by the members and late Dr. Hameed’s contribution in keeping the movement intact was acknowledged.

He was appointed as the Minister of Justice and Minister of Higher Education in 1989.  He was instrumental in giving thousands of jobs in Private, Government and Foreign Organisations. Today it is a pride to see many Sri Lankans working in responsible positions in our Missions abroad.  Late Dr. Hameed was an ardent advocate of internationalism and regionalism.

He played an active role in the Formation of SAARC.  He took a keen interest in the United Nations working, and he was fully involved for more than a decade in the working of the U.N. System.

Late Hameed served as a member of the United Nations Advisory Board on Disarmament studies for 10 years. He has been associated with many difficult and delicate negotiation and he enjoyed troubleshooting episodes.
On the domestic scene, he was engaged in negotiating with the LTTE.

Sri Lanka enjoyed relative peace and stability during this negotiating period of 14 months. He had widely travelled and had the opportunity of meeting most of the leaders of the world at international conferences and in their countries.

His publications of books included “In Pursuit of Peace,” “Foreign Policies Perspective of Sri Lanka,” “The Owl and the Lotus,” and “A Book of Spiritual Poems,” “Spring of Love and Mercy.”  He was awarded an honorary degree of Doctorate in Political Science by Hankuk University, of South Korea, in 1978.  He was also awarded an Honorary Doctorate by the Sri Jayewardenepura University, Sri Lanka in 1990. Whenever he was in the country, from his foreign travels, his biggest enjoyment in the electorate was meeting his constituents, at Katugastota residence, during the weekends, day and nights. Serving the constituents, shorteats, tea, coffee and Bulath, while he listens to their problems and enjoyed a Cuban cigar. He knew most of his constituents by their first names, which made the constituents happy.  We miss his friendly advice and humble approach to solving of problems.

After his demise, the Buddhists, of Harispattuwa had a Daanaya, in his memory at the Baudda Balamandalaya which he built at Ranavana Road, with 77 Buddhist priests, taking part and 108 Ata-Pirikala were presented on this occasion.

Such were the solidarity between all communities in Harispattuwa during Late Dr. Hameed’s period.
MAY ALLAH GRANT HIM A PLACE IN THE JENNATHUL FIRDOUS.  – Aameen
Brother A.C.A.Ghafoor

Disclaimer: He built racial harmony and international ties Dr. A.C.S. Hameed - Views expressed by writers in this section are their own and do not necessarily reflect Latheefarook.com point-of-view