As the Israel-Gaza conflict rages, India’s UN ambassador backs the ‘just Palestinian cause.’ In Indian-controlled Kashmir, police arrest pro-Palestinian protestors. This is how history, Hindutva and right-wing Zionism fuel that dissonance 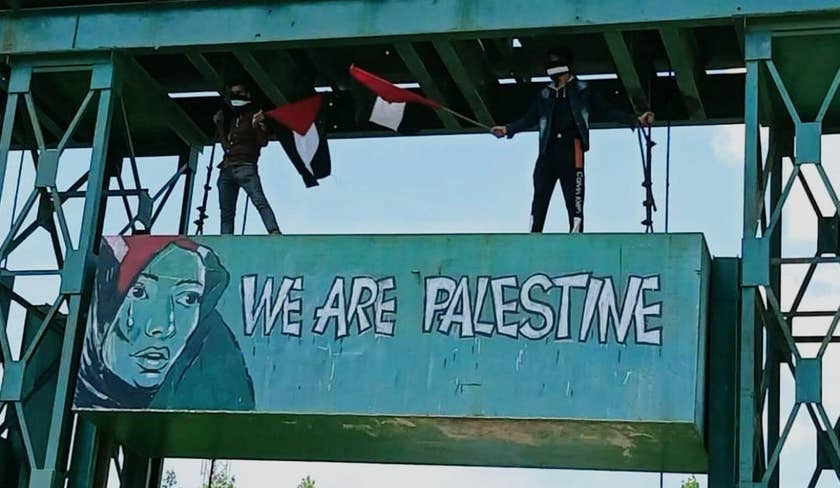 ‘We are Palestine’ mural painted last week in the capital of Indian-ruled Kashmir, Srinagar, by Kashmiri artist, Mudasir Gul, who was arrested and his work erased by the Indian policeCredit: Mudasir Gul

On a sleepy Friday afternoon last week, the silence in the Mahjoor Nagar locality of Kashmir was disturbed by panicked shouting, as a Kashmiri artist, Mudasir Gul, 32, was dragged away by Indian police officers while he was painting a mural in support of Palestine.

Gul was among 20 Kashmiris arrested for demonstrating public solidarity with the people of Gaza, part of an ongoing campaign by Indian security forces fearing a Palestinian-type intifada in Kashmir, a shaking off of Indian rule in India’s only Muslim-majority state, whose semi-autonomous status was repealed by New Delhi in August 2019.

Gul had drawn a mural on the gates of a spillover channel of the Jhelum river in the state capital Srinagar, showing the weeping face of a woman, her head draped in a Palestinian flag, with the slogan, “We are Palestine” written in bold white letters. The mural was later erased by the Indian police. 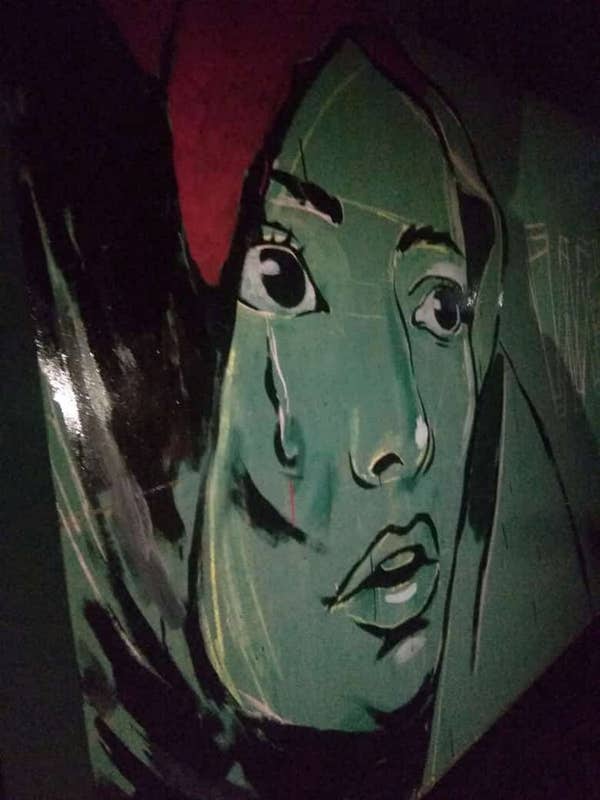 The arrests took place to block the organization of anti-Israel protests, lest they spiral into demonstrations against India’s rule in Kashmir. The police used pre-emptive arrests even though Kashmir is already under a double ban on protests: Political assemblies are banned due to the raging COVID pandemic, but even before then, all types of protests were prohibited for fear they would become rallies against the new regime of Indian rule.

Kashmir police chief Vijay Kumar said that the police were keeping a close watch on anyone “attempting to leverage the unfortunate situation in Palestine to disturb peace and order in the Kashmir valley.”

While accepting there was public anger regarding the Israeli-Palestinian conflict’s latest violent outbreak, Kumar added that any “irresponsible” comments on social media comments would also attract legal action.

The arrest of Gul and others has been seen by his family and friends as an attempt to silence dissenting voices in Kashmir – a disputed territory between India and Pakistan, but claimed by both in entirety.

The Kashmir dispute is the most central and intractable of the problems that have troubled relations between the two nuclear neighbors since the two countries won independence in 1947. India and Pakistan have fought three wars over Kashmir.

For both countries, Kashmir symbolizes their rival concepts of national identity that led to the partition of the subcontinent.

Pakistan, conceived by its founders as the homeland for the Muslims of the subcontinent, considers Muslim-majority Kashmir a natural and automatic part of its territory.

For Indian political leaders, especially from the opposition Congress party, Kashmir’s Muslim majority makes it a symbol of the country’s multicultural, inclusive and secular constitution, and an aspiration to complete a still-unfinished issue of partition: The integration of Kashmir as a unified territory under Indian rule.

That was also the line taken by a majority of Indians until the revocation of Kashmir’s limited autonomy in 2019. That change of status signified how far the Modi government had strayed from long-standing consensus: Its right-wing, Hindutva discourse now reframes Kashmir as a Hindu holy land, seeks to alter its demography to ‘dilute’ or replace its Muslim population, and lobbies for the adoption of Israel’s settler model for Kashmir. 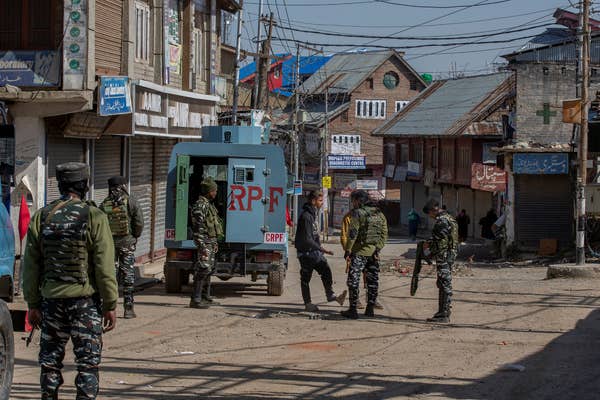 However, over the past three decades, India has faced political and militant resistance to its rule in Kashmir, from separatists and Islamists, some backed by Pakistan, leading to the loss of over 70,000 lives. New Delhi has sought to crush the movement with a highhanded approach and an abrogation of the state’s political autonomy.

After the 1971 Shimla Agreement, signed by both countries in the wake of the war they fought over West Pakistan, which became Bangladesh, the Kashmir issue was put into cold storage. Even America, which had played a leading role since 1948 in trying to help India and Pakistan resolve the conflict, dragged its feet and pivoted to a more limited role.

A fragile status quo persisted in the region until the outbreak of a separatist insurrection in the late 1980s against Indian rule, leading to frequent anti-India protests.

The term “Kashmir Intifada” appeared first time in the journal “Pakistan Horizon,” published by the Pakistan Institute of International Affairs, in April 1990, amidst an intensifying anti-India armed struggle. The essay’s author, Hafeez R. Khan, described the insurrection as an historic moment in Kashmiris’ struggle for the right to self-determination, as envisioned in multiple UN resolutions.

Khan says the Kashmir intifada broke the myth created by India that the Kashmir issue has been settled for good thanks tosuccessive elections and the permanent integration of Kashmiris into the Indian nation-state.

Ever since the homegrown militancy erupted, Kashmiris have used the term “intifada” to describe their protests against Indian rule.

The term echoed frequently throughout Kashmir during 2008, when the Indian government tried to transfer 98 acres of forest land to a Hindu shrine in the high Himalayas, sparking mass protests in which, for the first time, stones were hurled against Indian forces. Over 60 civilians were killed and hundreds injured in the Indian police action against demonstrators.

However, it really gained currency after Indian analysts started referring to the street violence gripping the region as the “Kashmir intifada” in late 2010, a nod to the to the Palestinian stone-throwers prominent during two intifadas against Israeli forces.

The protests then were sparked by a DNA investigation which found the Indian Army had killed three civilians but branded them as foreign terrorists. Nearly 112 young Kashmiris were killed by the Indian police and paramilitary forces in the six-month-long protests.

Kashmiris themselves have adopted the term “intifada,” a loan word from Arabic, to give Kashmir a new cultural context distinct from its Indic moorings. They see a clear analogy between their struggle against the Indian state, and the Palestinians against the Israeli state, and seek to highlight that comparison, accusing both governments of stifling dissent by violence and suppressing the right to self-determination.

Kashmiris are thus trying to internationalize the Kashmir issue, and to draw support from the Muslim world, Western democracies and international public opinion, all of whom have historically been far more vocally engaged with the Israeli-Palestinian conflict than with Kashmir.

Despite Kashmir being a bone of contention between India and Pakistan, Palestine is the rare issue where both countries have been on the same page.

From the stirring speeches of its founding father, Muhammad Ali Jinnah, support for the Palestinians has been hardwired into Pakistan’s politics (and the equation of India’s occupation of Kashmir and Israel’s occupation of the West Bank is a linchpin of its public diplomacy.)

And India has supported Palestinian self-determination and a two-state solution as part of its non-aligned stance and anti-colonial solidarity ever since independence from British rule in 1947. India was the first non-Arab country to contemporaneously recognize the Palestine Liberation Organisation’s authority as “the sole legitimate representative of the Palestinian people.”

A PLO office was set up in the Indian capital in 1975, with full diplomatic relations established in March 1980. India recognized Palestine’s statehood following Yasser Arafat’s declaration of independence in Algiers in 1988.

However, in the last few years, India has broken with decades of cold hostility towards Israel, with the Modi government cultivating significant economic and defense ties with Netanyahu’s Israel.

In July 2017, Narendra Modi became the first-ever Indian prime minister to visit Israel, whose jets once chased the country’s first Prime Minister Jawaharlal Nehru when he came to visit UN troops, including Indian peacekeepers, in Gaza in 1960.

Support for Israel has been building up in India, particularly among Hindu nationalists who fuel Modi’s base, who see common cause with the anti-Muslim, majoritarian nationalism of right-wing Zionism. That has been most visible on social media, where a vast pro-Modi troll army pushes memes and stories emphasizing what they consider an almost existential solidarity between India and Israel.

During this mostrecent crisis between Israel and Palestine, the #IndiaStandWithIsrael hashtag has trended in India, mostly amplified by officials and supporters of the ruling Bharatiya Janata party.

Prominent journalist Rana Ayyub noted on Twitter that there was a “common thread” linking most of the #IndiaStandWithIsrael tweet handles: a “visceral hatred for Muslims and a bloodlust to see Muslims massacred and shown their place.”

But the battle for public opinion isn’t all going Israel’s way. On social media, the #IndiaStandWithPalestine hashtag has joined the online jostling for dominance, while a number of celebrities have publicly declared their support for Palestine; some have slammed the cosiness of India and Israel’s right-wing ethnonationalists.

They described the rockets fired by Palestinians as part of a resistance “backed by international law” to Israel’s illegal occupation: “Palestinians in Gaza… had warned that if Israel and the Zionists did not stop these outrages, they would face a barrage of rockets; since there was no halt to the attacks, Palestinians in Gaza fired…We stand with the Palestinians…and their right to resist the occupation.”

And this week, at the UN Security Council, India pushed back against suspicions that its partnership with Israel meant ditching wholesale its commitment to the Palestinians.

Its ambassador reaffirmed its strong support for the “just Palestinian cause” and “unwavering commitment” to a two-state solution (whilst decrying “indiscriminate” Gaza rocket attacks on Israeli civilians) but stopped short of any direct reference to Israel’s occupation or the future Israel-Palestine borders.

Clearly, for the Indian government, it is legitimate and necessary to declare a (perhaps modulated) dedication to the Palestinian cause at the most prominent international forum in the world. But for the same government, it appears that it is far too threatening to permit its citizens in Kashmir to express the same stance.

Disclaimer: India’s Intifada: Why Modi Is Arresting pro-Palestinian Protesters in Kashmir - Views expressed by writers in this section are their own and do not necessarily reflect Latheefarook.com point-of-view