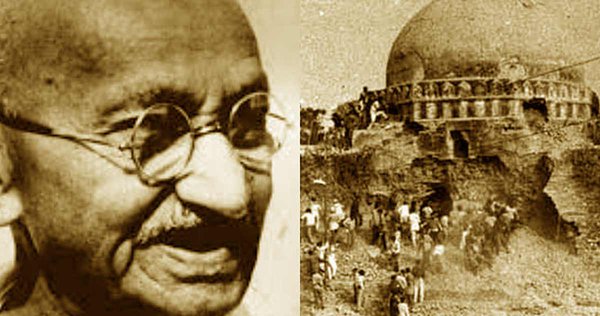 Humra Quraishi01 Oct 2020
In the backdrop of the Mahatma Gandhi Jayanti, I have been sitting wondering how would he, Mahatma Gandhi, have reacted to the verdict on the destroyers of the Babri Masjid. He would have been more than dismayed and devastated to know that all the accused have been acquitted by the Special Court. Perhaps, Gandhi would have voiced not just his concerns and but also raised pertinent queries, focusing on the fact that that destruction wasn’t that of just a historic structure of religious significance, but it also sowed seeds of destruction and disharmony in the entire country. And even far beyond.

That destruction of the Babri masjid can be termed as a turning point in the recent history of the country, as it paved way for many more disasters to come in way of our collective survival. To quote Khushwant Singh from one of his earlier writings – “Ever since Advani’s rath yatra, I have been severely critical of him and at a public platform, I told him that he is responsible for sowing the seeds of hatred between the communities… his rath yatra from Somnath to Ayodhya culminated in the destruction of the Babri Masjid on December 6, 1992…. Khushwant also wrote details to the offshoots to the Babri Masjid destruction – “The repercussions were worldwide. Enraged Muslims targeted Hindu and Sikh temples in Bangladesh and even in the U.K …. And in India, relations between Hindus and Muslims have never been the same. There were communal confrontations in different parts of the country: the serial blasts in Mumbai, the attack on the Sabarmati Express in Godhra and the massacre of the innocent Muslims in Gujarat can all be traced back to the fall of the Babri Masjid. ….However, the BJP reaped a rich electoral harvest, won many of the elections that followed and eventually installed Atal Behari Vajpayee as prime minister and LK Advani as his deputy…”

Today, of course, we have reached such a hopeless situation that nobody has been left in a condition to react to any of the fresh onslaughts! Too many disasters and setbacks and tragedies are taking place every day. Day after day. If you recall the Muslim community did not even react last Autumn (Autumn of 2019) when the verdict on the Ram Janambhumi/Babri Masjid was announced. Muslims sat back, sad and disappointed and that’s about it. …they have been witnessing and withstanding all sorts of tragedies in these recent years. Quiet and forlorn they sit. With nil expectations left from this present Right-Wing government.

Disclaimer: Gandhi and Babri Masjid - Views expressed by writers in this section are their own and do not necessarily reflect Latheefarook.com point-of-view