Skip to content
EUROPE AND USA LF
Spread the love

On Sunday July 11 Bosnian Muslims observed the twenty sixth anniversary of the genocide at Srebrenica by Serbian soldiers. Starting from July 11, 1995, for three days, the ethnic Serb forces gunned down Muslim men and boys in and around Srebrenica.

It all started when five Muslims were killed in the Bosnian capital Sarajevo during a peaceful protest. Thus began the killing spree which ended up as the first ever genocide in Europe since World War 11. Some reports estimated the number killed at around 300,000 though no one knows the exact number perished.

The irony is that these massacres took place under the watchful eyes of champions of human rights in Washington, London and Paris. The United Nations was aware of the planned massacre but did nothing to protect the victims.

Instead the Dutch UN soldiers, entrusted with the task of protecting Muslim refugees, handed over them to Serbs knowing very well they were to be massacred.

In 1945, Bosnia-Herzegovina became a republic within the Yugoslav Socialist Federation. Even under President Tito Bosnian Muslims were defined as a separate nation and enjoyed the same rights as others until the breakup of Yugoslavia in 1991.

In the multiethnic Bosnia-Herzegovina, in the heart of Europe, Muslims formed the largest group- Muslims around 44 %, Orthodox Serbs 31 % and Catholic Croats 17 %.

Influenced for centuries by the western culture for Muslim Bosnians, blue-eyed Europeans themselves; religion and religious traditions represented a crucial symbol of self-identity, though it was not easy to differentiate them from the Catholic Croats and Orthodox Serbs.

Problems began with the collapse of communism. Following a referendum in April 1992, Bosnia-Herzegovina declared independence and emerged as a separate country. The three communities had their own conflicting goals. For example, Muslims wanted a centralised independent Bosnia; Serbs were keen to remain in the rump Yugoslavia while Croats opted to join the independent Croatian state, resulting in the formation of a tactical alliance between Muslim and Croat nationalists out-voting Serbs. This incensed Serbs.

Bosnian Serb troops, led by Radovan Karadzic, laid siege on the Bosnian capital Sarajevo. Violence broke out and the three communities were at each others’ throats.

Between 1992 and 1995, some of the worst ever genocide was committed against Muslims. They were detained, butchered and buried in mass graves, some of which are yet to be identified. Television footage of once healthy but starved, beaten, tortured and scantily dressed Muslims locked up by the hundreds in cattle-shed like enclosures spoke volumes for their plight.

Even Bosnian Muslims themselves couldn’t believe their plight because those who were burning and destroying their homes, villages and killing them were none other than their own friends and neighbours with whom they had lived in harmony for generations.

Two years after being designated a UN Safe Area; the Srebrenica enclave was under siege by Bosnian Serbs. Sensing the threat, around 15,000 Muslim fighters asked for the return of the weapons they had surrendered to UN peace keepers to protect themselves. This request was turned down by the UN which left the Muslims at the mercy of Serbs.

An eyewitness account said civilians begged the Dutch UN soldiers to save them, by allowing them to stay at the base. But everyone was thrown out of the base and the Serbs took them to slaughter.

The first massacre of Muslim civilians took place in a warehouse in the village of Kravica. In the five days after Bosnian Serb forces overran Srebrenica, the worst ever genocide of Muslims began and continued in full swing, uninterrupted for four days – turning the entire Srebrenica region into a slaughterhouse and the adjacent beautiful valleys into mass graveyards – some yet to be identified. 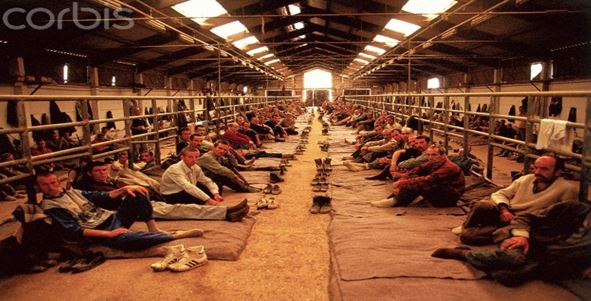 Reports of massacres emerged when the first survivors of the long march from Srebrenica began to arrive in Muslim-held territories. Describing the massacres a Serb soldier, Drazen Erdemovic, himself claimed to have killed one hundred Muslims in the Srebrenica massacre, told the war crimes tribunal on Milosevic that “Muslim men and boys were taken in busloads to a farm, systematically lined up and shot – first with machine-guns, then with a single pistol shot to the head”. Many were blindfolded and had their hands tied. They first started mistreating people they recognised, and then started killing them all over the field. Yet he couldn’t understand why it was done.

Years later admitting the UN’s failure the former UN Secretary General Kofi Annan had this to say in his 155 page report on the massacre of Srebrenica Muslims:

“The massacre of Muslims would forever haunt the UN which must accept partial responsibility for this massacre, in the UN “safe area”. The UN Security Council should have approved “more decisive and forceful action to prevent the unfolding horror”. Not since the horrors of World War II had Europe witnessed massacres on this scale .The tragedy of Srebrenica will haunt our history forever and observers had been quick to blame the Dutch UN battalion which withdrew from Srebrenica in the face of Serb attack. 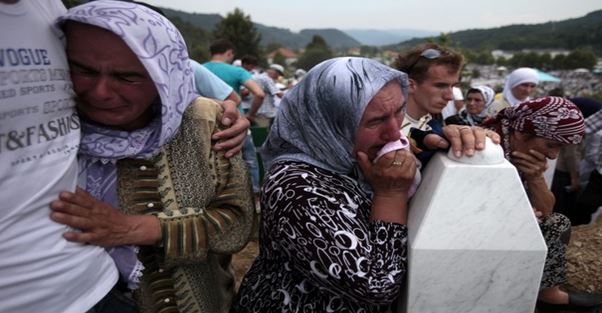 Bosnian Muslim women crying at the graveyards of their loves ones

Kofi Annan added that the fall of Srebrenica was “shocking” because the enclave’s inhabitants had believed the UN and NATO would ensure their safety.

Later a public inquiry into the Srebrenica massacre by a Dutch parliamentary commission held the Dutch Government responsible for the massacre of Muslims at Srebrenica.

The carnage in Bosnia ended, following the 1995 Dayton Peace Accord, which created two entities; one for Bosnian Muslims and Croats, the other for Serbs each with its own government, parliament, president, police and military besides a central Bosnian government and rotating presidency with a NATO led peacekeeping force to ensure order and stability. Instead of integration, the two entities reinforced separation and nationalism.

But for the people, conditions have not improved.

Meanwhile, on 11 March 2006, Slobodan Milosevic was found dead in his prison cell at the UN detention centre in Hague. In a letter to Russian foreign minister from his cell in the Hague, Milosevic had stated on the eve of his death that he had been poisoned with drugs.

Lamenting that he had died before being convicted, shocked and deeply disappointed relatives of hundreds of thousands of Milosevic’s victims accused the tribunal of failing to convict him for five long years despite hundreds of witnesses, tens of thousands of documents and other concrete evidences .The trial’s premature conclusion also raised questions about the conduct of tribunal judges who made key decisions that led to an exhausting, expensive five-year process sending US$200 million down the drain.

The judges “were afraid that they would try him to death. And they did. That’s exactly what happened,” said Scharf, director of the Frederick K. Cox International Law Center at Case Western Reserve University in Cleveland. Milosevic “ended up cheating history. One of main purposes of the tribunal was to create a historic record of atrocities and of who was responsible that would pierce years of propaganda,” Scharf said.

Meanwhile in one of the shameful verdicts the The UN court in The Hague sentenced the architect of Srebrenica massacre Ratko Mladic who has so much to expose the real culprits in the Western capitals, to life imprisonment for genocide and crimes against humanity.

Disclaimer: Bosnian Muslims observe “Srebrenica Massacre” By Latheef Farook - Views expressed by writers in this section are their own and do not necessarily reflect Latheefarook.com point-of-view