Wounded Palestinian Rayed Qadoom lies near a poster depicting his five-year-old sister Alaa, who was killed during Israel’s attack on Gaza on August 9, 2022.  Alaa was the first of 16 children killed in three days of Israeli attacks. Pic by Mahmud Hams / AFP

Once again the West has failed to stand by what is right and protect the oppressed. 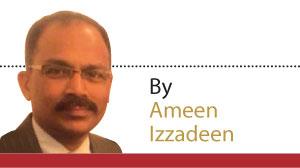 The zeal with which it condemned Russia’s invasion of Ukraine, rushed military assistance to the nation under occupation, and imposed punitive sanctions on Russia looked hypocritical. Such a reaction was not to be seen when Gaza was pounded by child killer Israel last week without any provocation.

Instead, Western nations scrambled to praise Israel and failed to condemn the massacre of 16 innocent Palestinian children who were among 44, mostly unarmed Palestinian civilians, killed in three days of attacks until a ceasefire held sway.  United States President Joe Biden expressed his support for Israel’s right to defend itself against “indiscriminate” rocket fire from the Palestinian Islamic Jihad (PIJ). It appears he was badly briefed. There was no such rocket attack to provoke Israel. The PIJ responded with feeble rocket attacks that killed no Israeli civilian only after Israel launched the attack on grounds of a perceived threat.

The West often takes the moral high ground to portray itself as a human rights champion and a rule-based player in international politics. However, when it comes to Israel’s crimes against the oppressed Palestinian people, the West simply cannot resist the temptation to slavishly genuflect before the oppressor.

Israel is emboldened to kill Palestinian children and civilians at will largely because of the encouragement of Western nations and politicians.  The bigger crime is committed not by Israel but by its western patrons. The original sin was committed by imperial Britain. It planted an illegitimate state in the Arab land it seized from the Ottoman Empire during World War 1.

In 2017 when the world marked the 100th year of the injustice caused to the Palestinian people by the 1917 Balfour Declaration, Britain brazenly justified its crime of moral turpitude. It said it would not apologise and it was proud of the role it played in creating Israel.

Such an affront to justice can come only from those who are incapable of differentiating right from wrong and those who are hardcore psychopaths. What right did Britain have in 1917 to promise to the Zionists the Palestinian people’s land – a territory where the Palestinian tribes had been living in harmony with the Canaanites, the Hittites, the Ammonites, the Moabites, and the Edomites long before the Jews settled there after their exodus from Egypt in the 13th century BC?

Embroiled in a leadership battle, the British Conservative Party’s top two candidates for the premiership last week tried to outcompete each other in pledging their fealty to Israel.  Liz Truss and Rishi Sunak defended Israel’s scorched-earth policy in Gaza even as innocent children lost their lives.

Why blame Britain alone? The United Nations has continuously failed to blacklist Israel for crimes against children. The UN’s latest Children-and-Armed-Conflict report released last month highlighted that in 2021, Israeli forces killed 78 Palestinian children, maimed another 982, and detained 637. Despite this appalling record that can come only from a Nazi or fascist state, Israel escapes only with a warning, without being blacklisted. Perhaps, to mitigate criticism that he treats Israel with kid gloves, the UN chief issues perfunctory messages that sound tough but lack punch. Mere verbose.

Even in the latest UN report for 2021, Secretary-General Antonio Guterres had a tough message for Israel.
“I am shocked by the number of children killed and maimed by Israeli forces during hostilities, in air strikes on densely populated areas and through the use of live ammunition during law enforcement operations. Should the situation repeat itself in 2022, without meaningful improvement, Israel should be (black) listed,” he warned in what was seen as a surrender.
When Gaza came under Israeli attack in May last year, the UN Chief said, “If there is a hell on earth, it is the lives of children in Gaza.” In the ten-day attack, 60 children were slaughtered by Israel. Yet, the UN finds ways not to blacklist Israel.

Don’t blame a hapless Guterres. He is being arm-twisted by Israel’s powerful friends – the United States and its Western allies.  The UN would not blacklist Israel even if a thousand Palestinian children were massacred by Israel’s modern-day Pharaohs, because of the Western nations’ blind support for the Zionist nation’s crimes.
Last week’s attack on Gaza was totally unprovoked. Israel justified the attack claiming there was a perceived threat from the Palestinian Islamic Jihad and therefore the group should be neutralised to deter future attacks. Lost in Israel’s narration is the Palestinian people’s legitimate right to fight for their freedom – a right the US and its Western allies rightly defended when Ukrainian civilians took up arms to resist the Russian occupation of their country.

The US and its Western allies’ complicity in Israeli crimes has an eerie resemblance to the Emmett Till case which made international news this week after 70 years. A grand jury in Mississippi, the US, on Tuesday declined to indict the white woman whose accusation set off the lynching of Black teenager Till, though there was evidence.
The 14-year-old boy was killed by the husband and the brother-in-law of Carolyn Bryant Donham, then 21, after she accused him of flirting with her. He was abducted, tortured and then lynched. The two white men were arrested for the crime, but the court acquitted them in 1955. A year later, the two killers in an interview with Look magazine openly admitted they had tortured and murdered the boy, and sold the story of how they did it for $4,000.
Though Till’s case became a catalyst for the civil rights movement, it highlights the institutionalised apartheid that existed then in the US where the whites could lynch blacks and get away with the crime.

Similarly, in the apartheid-infested international order policed by the US and its western allies, Israel is permitted to kill Palestinian children at will or carry out war crimes on the pretext of a perceived threat or to shore up the popularity of the incumbent Prime Minister ahead of the general election. In this highly discriminatory world disorder, Ukrainian civilians are hailed as freedom fighters for resisting occupation, but the Palestinians are labelled terrorists for doing the same.

This week’s attack on Gaza, the world’s largest open prison where some 2 million impoverished people have been squeezed into a land area of 365 square kilometres, won’t be the last. In the Palestinian annals, it will be counted as just another attack made possible by the blind support of the Western nations.
In the meantime, expansionist Israel’s evil also thrives in the silence of the good people. For they have not put enough pressure on the leaders of their countries to stand by the Palestinian people’s just struggle to form their independent state with East Jerusalem as capital.

Disclaimer: Like Pharaoh, Israel also kills children by Ameen Izzadeen - Views expressed by writers in this section are their own and do not necessarily reflect Latheefarook.com point-of-view