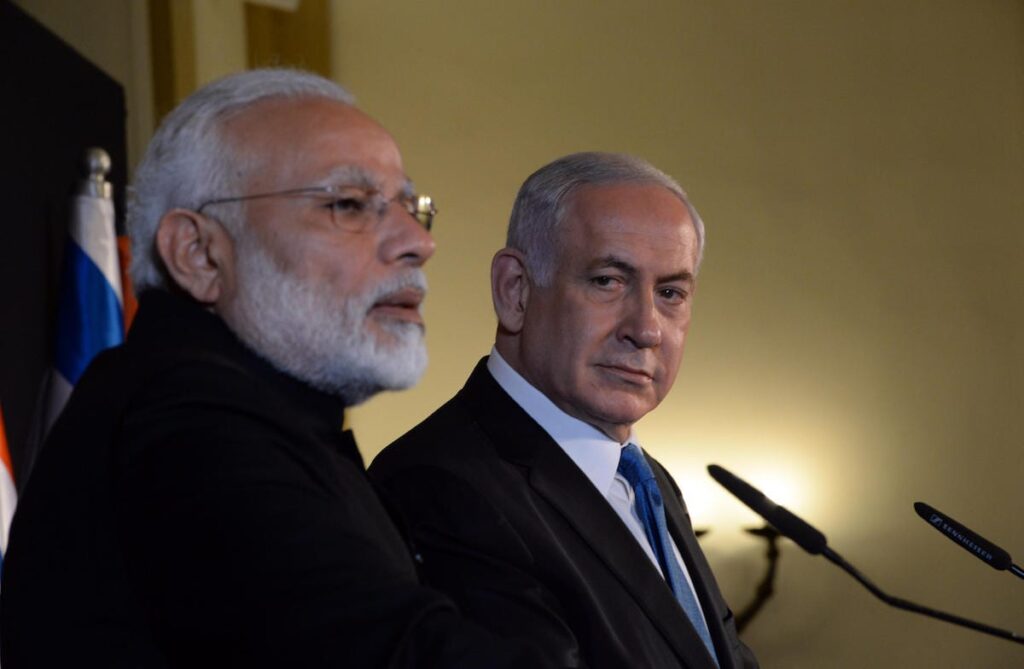 One could easily be mistaken into thinking that some of the most ardent and vocal supporters of Zionism on social media are Israeli Jews or certain Evangelical Christians in the US. However over the past several years, far-right Hindu nationalists from India, who subscribe to the ideology known as Hindutva have become some of the most prolific and zealot supporters of Israel, less so due to their genuine security concerns of the state, or interest in Middle Eastern affairs but as a projection of their deep politically-driven animosity towards Muslims.

On Saturday night Israeli Prime Minister Benjamin Netanyahu tweeted his appreciation towards overseas governments he identified as standing with Israel and its “right to self-defence against terrorist attacks”. The post contained flag emojis of 25 countries; chief among them the US but mainly select European and South American countries, India was not one of them.

This appears to have caused much disappointment and dismay to a multitude of Indian users and prompted many to question why or beseech Netanyahu into adding the Indian flag emoji in recognition of their own standing with Israel amid its on-going heavy bombardment over the Gaza Strip in response to rocket fire from Hamas – which itself was in retaliation to the state’s illegal actions in the Shaikh Jarrah neighbourhood and its violent and provocative desecration of the Al-Aqsa Mosque during the holy month of Ramadan.

Along with replies of India and Israel flag emojis side-by-side many users also used the hashtag #IndiaStandWithIsrael.

Other users tried to convince themselves and others that Netanyahu’s omission of India was due to a disparity in the Indian government’s official position on the Israel-Palestine conflict and those shared by the people of India.

The commotion even caused “Indians” to trend on Twitter as there was an inevitable backlash involving mockery and memes by users who found this online behaviour to be humourous, cringe-worthy or lacking in self-respect.

Clearly not all Indians are staunchly pro-Zionist though

One user posted a quote by Mahatma Gandhi, widely considered to be “Father of the Nation” and who was assassinated by a Hindu extremist in 1948 less than a year after India gained independence from the British.

Gandhi is quoted as stating that “Palestine belongs to the Arabs in the same sense that England belongs to the English or France to the French” in 1938, ten years before the creation of the state of Israel. According to Indian professor of contemporary Middle East, P. R. Kumaraswamy critics perceive New Delhi’s growing ties with Israel “as an abandonment of Gandhian values” and the 1938 statement has been used reiterate India’s continued support for the Palestinians.

India voted against the Partition of British Mandate Palestine and Israel’s admission to the UN. In 1974 India became the first non-Arab country to recognise the Palestinian Liberation Organisation (PLO) as the only legitimate representative of the Palestinian people. India also became one of the first countries to recognise Palestinian statehood following the 1988 Declaration of Independence made by the PLO.

However, during the 1980s, India’s position on Israel also began to shift, as did its relationship with the US at the expense of the Soviet Union. This lead to normalisation and full diplomatic ties between India and Israel in 1992, becoming the last major non-Arab and non-Muslim country to do so.

Following the ascent of the Hindu-hardliner BJP administration headed by Prime Minister Narendra Modi in 2014, India’s bilateral relations with Israel intensified, as did the outpouring of online support for Israel by many of Modi’s supporters following his 2015 announcement that he would visit Israel. He made the visit two years later, making history as the first Indian prime minister to do so.

Disclaimer: 'Please sir mention India', Hindutva Twitter reacts to Netanyahu snub by Omar Ahmed - Views expressed by writers in this section are their own and do not necessarily reflect Latheefarook.com point-of-view