Skip to content
Syria
Spread the love
The courtyard of the mosque with its mosaics and decorations is designed to resemble the Islamic concept of paradise (Zirrar/MEE)
We explore the history behind the great mosque by following the journey of the renowned Andalusian traveller and poet, Abul Huayn ibn Jubayr

On entering the city, he famously said: “if paradise is on the earth then Damascus without a doubt is in it. If it is in the sky, then it vies with it and shares its glory”.

The renowned traveller chronicled his journey from Saudi Arabia, to Egypt and the Levant region, also passing through Sicily, Italy, and other countries.

Jubayr spent a month in Damascus, lodging in the Dar al-Hadith (“house of religious tradition”) just west of the great Umayyad mosque.

This institution no longer exists and in fact much of the glory of Damascus that the traveller witnessed would be destroyed following the Mongol conquest in 1260, and the brutal siege and destruction of the city that followed its capture by the Turco-Mongol leader Timur in 1401.

However, the magnificent Umayyad mosque still stands, revealing more about the city’s history and its rulers.

We went to Damascus, to trace Ibn Jubayr’s journey, and explore the areas he documented.

The majestic Umayyad mosque was completed in the year 715 by the sixth Umayyad Caliph, al-Walid.

The mosque is built on a site that has been in continuous use for several millennia as a house of worship.

It once held temples built by the ancient Arameans, and later the Romans. When Syria came under Christian Byzantine rule, the old temple was transformed into a cathedral.

In 634 CE Damascus became the first major Byzantine city to be conquered by Islamic rulers under the leadership of the first Rashidun Caliph Abu Bakr and his generals Abu Ubaidah and Khalid ibn-al Walid.

During the arrival of Islam until 715 CE, when the caliph al-Walid began construction of the new mosque,  the old cathedral served as a prayer space for both the city’s Christian and Muslim communities. 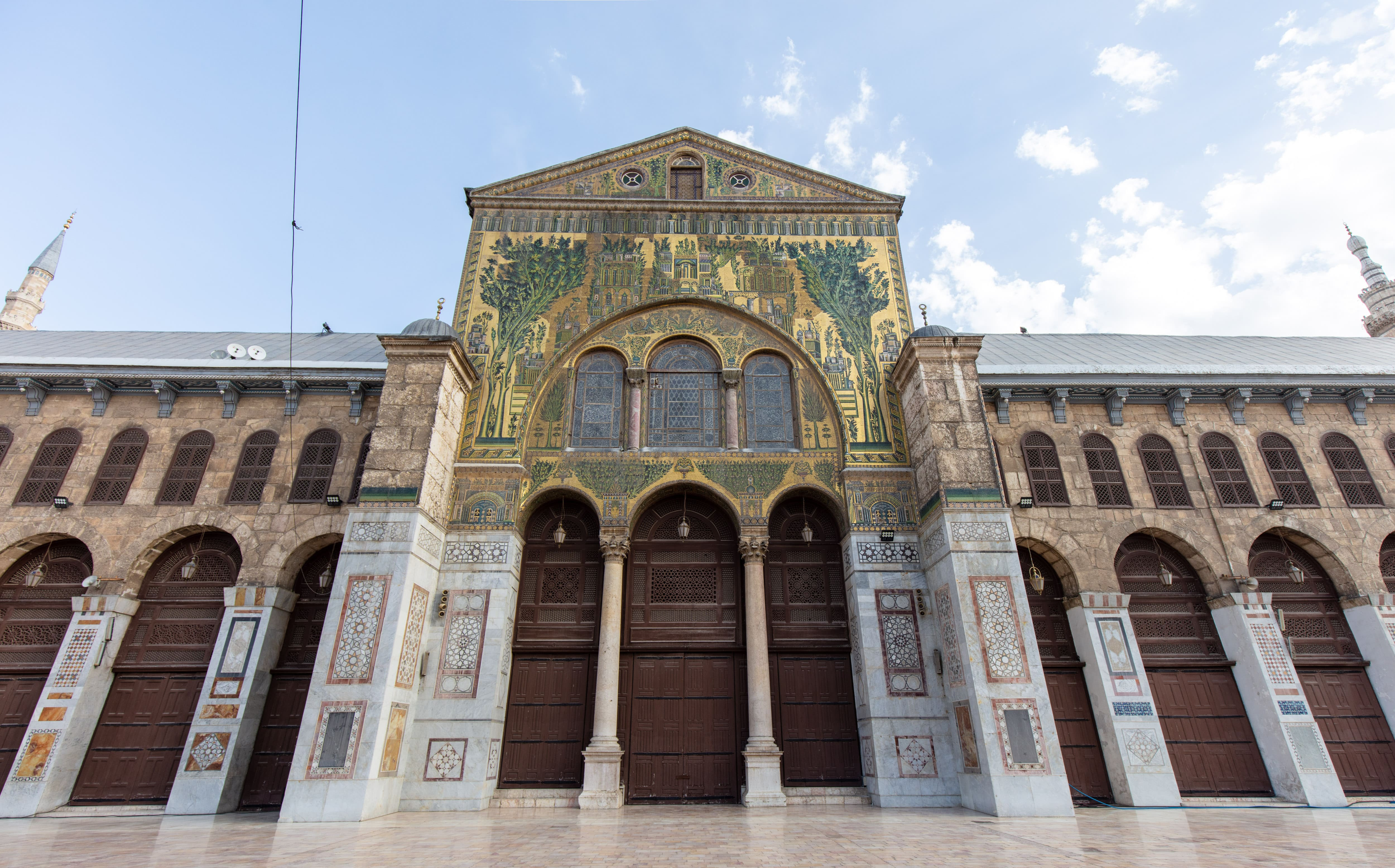 The central mosaic at the Umayyad mosque in Damascus (Zirrar/MEE)

It’s said that for this 80-year period both communities would enter the house of worship through the same door, and then the Muslims would turn right, and the Christians left.

However as the Muslim community grew, there was need for more prayer space.

Walid had the old cathedral demolished and commissioned the construction of what we today know as the Umayyad mosque.

Construction of the mosque

Work began on the Umayyad mosque before there was any established idea of what a major Muslim house of worship should look like.

Existing mosques at Medina, Makkah, and Kufa, had been small, and not as ambitious as what Walid had in mind: he wanted something that would offer a taste of what the paradise of Islam offered to the faithful.

Walid ordered that every available space above the marble panelling of the lower walls be covered with mosaics, on the inside and outside of the mosque. While Byzantine architecture regularly made use of mosaics, a project of this magnitude been not been attempted before.

The whole of the mosque was covered in images of the fantastic gardens of paradise, or as some claim, the vast and diverse landscapes the Umayyads governed, which spanned at its peak from Spain in western Europe to Sindh in modern Pakistan, all painted in gold with colourful stone mosaics.

Some 40 tonnes of glass and stone cubes – of which 12 tonnes were green – were set so that the whole space shone and glimmered like a fantastic garden. Each cube was carefully angled to catch the light when seen from below.

The design took inspiration from a verse in the Quran that described paradise with high chambers and flowing rivers.

In his reports, Jubayr described the perfection of the construction of the mosque, writing that it had marvellous embellishments and decorations, including gold mosaics and remarkable coloured stones that dazzled in the light.

It’s said the mosque cost seven years of the total income of the Damascus treasury. 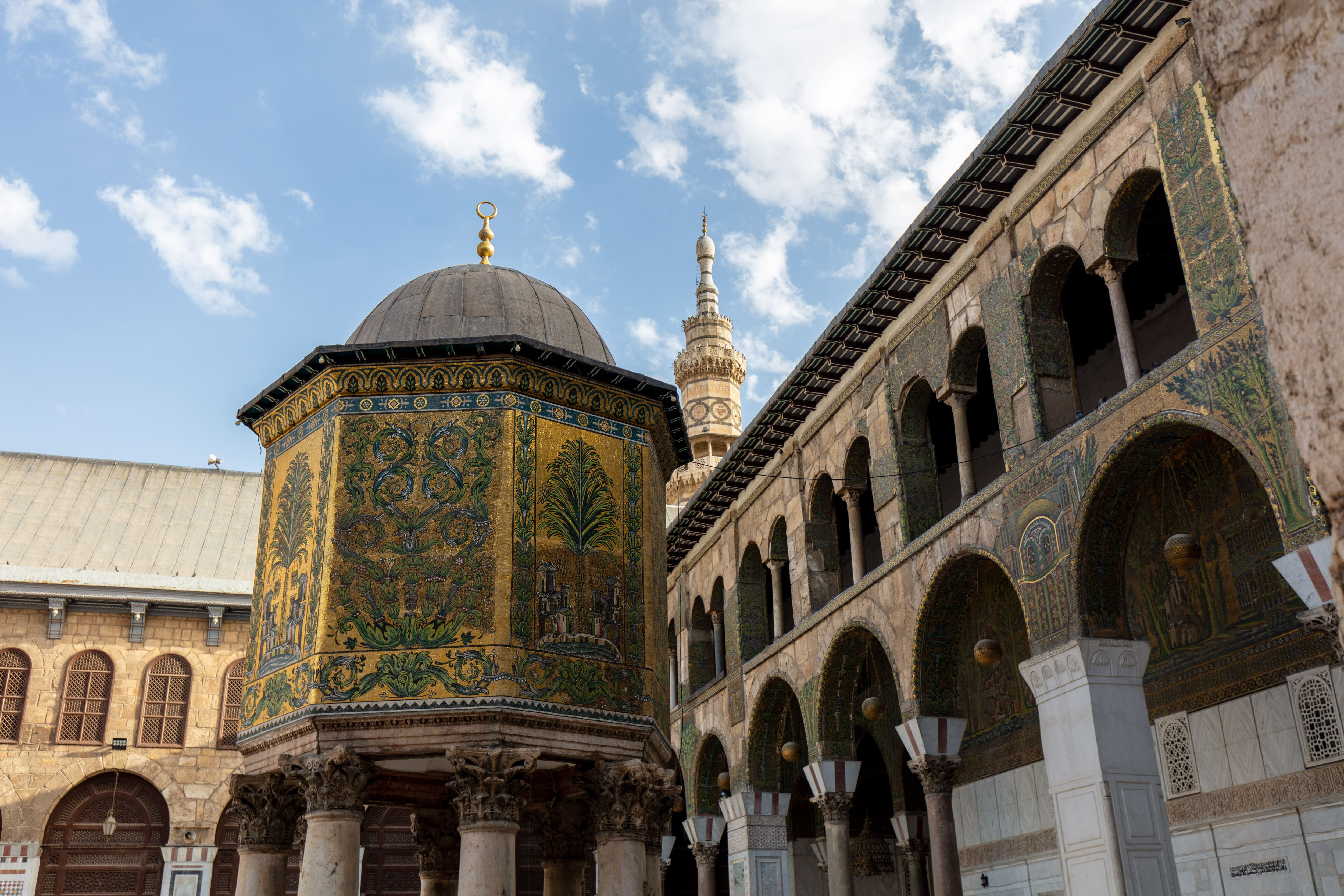 There’s been debate on whether the design language for the mosque was Byzantine, neo-Roman, Sassanian (Persian), Syrian, or purely Islamic, but in reality, it contains elements from all of these traditions.

The mosque reflected – as would become the tradition as Islam expanded – the vitality of the local landscape and people.

Never before had the Muslim people – who were still a young community at this time – seen something so grand and majestic.

The architecture of the mosque

According to Muhammad al-Idrisi, a Muslim geographer and cartographer, the mosque had no equal in the world, referring to its solid construction and impressive, diverse designs.

But the mosque was not only considered groundbreaking for its decoration. Its innovative construction and design also continued to inspire the creation of many other mosques that were built in the centuries to follow.

Although the Umayyads only ruled Damascus for 90 years, their great mosque remained unchanged for the next 1,300 years, with later dynasties only making minor alterations to it.

When the Umayyad Caliph al-Walid demolished the Christian cathedral, the outer walls of the sanctuary from the Roman-era template were kept. But he moved the main prayer hall from the middle of the main courtyard – where it had stood when the site was a cathedral and Roman temple – and located it instead against the south wall. 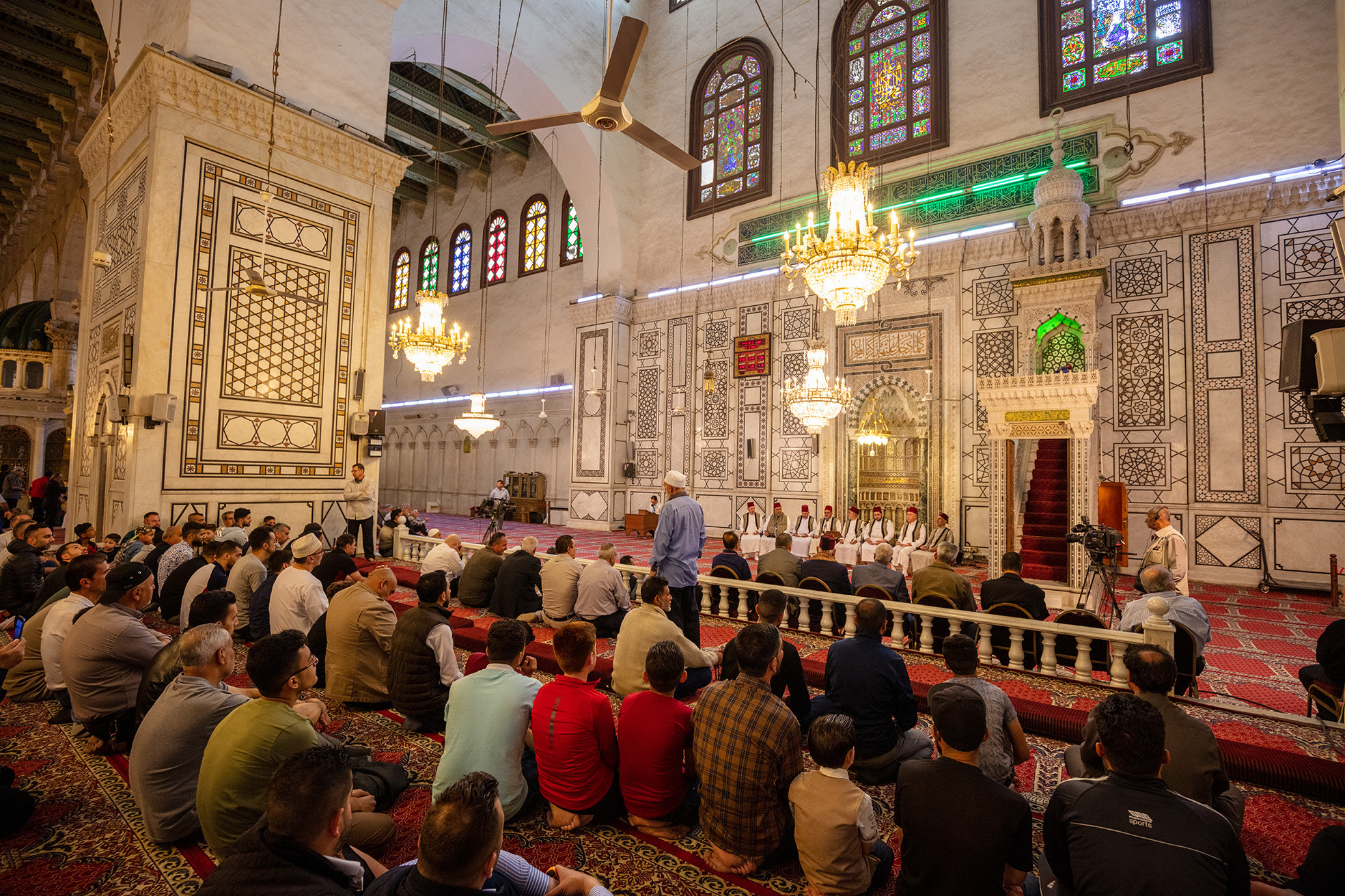 Friday prayers at the Umayyad mosque in Syria (Zirrar/MEE)

Up until the construction of the Umayyad Mosque, mosques were mostly flat-roofed and supported by columns but this new mosque in Damascus changed this by imitating some of the layout and beautiful designs found in Byzantine basilicas around Syria.

The prayer hall was divided into three aisles, supported by multi-level arches that would hold up the roof.

The dome, originally doubled-shelled and made out of wood, was unlike anything the world had seen.

Ibn Jubayr is said to have climbed inside and commented on its splendid design. The basic layout and design language of the mosque would heavily influence mosques later constructed in Egypt, North Africa, and Andalusia.

When the concave mihrab was added to the original mosque, it was considered a new concept, with the only other one being at the Prophet’s Mosque in Medina, Saudi Arabia. In his writing, Jubayr commented on its exemplary beauty, calling the mihrab “the most wonderful in Islam for its beauty and rare art”.

The Persian historian, Ibn al-Faqih, commented on the magnificence of the marble and mosaics in the mosque, as well as the ornamented ebony ceiling and mihrab, which was inlaid with precious stones.

Though the original mihrab was restored several times, it retained its original form until a devastating fire in 1893 when it was entirely destroyed. The current mihrab attempts to replicate the design of the original.

Today, the Umayyad Mosque stands proud with three minarets but originally it was built with none.

The three minarets are the Minaret of the Bride, the first minaret built under the Abbasids; the Minaret of Qaitbay, built in the Egyptian-Mamluk style by the great Mamluk Sultan Qaitbay; and the Minaret of Prophet Isa, the tallest minaret, originally built by the Ayyubids, and later extended under the Ottomans. 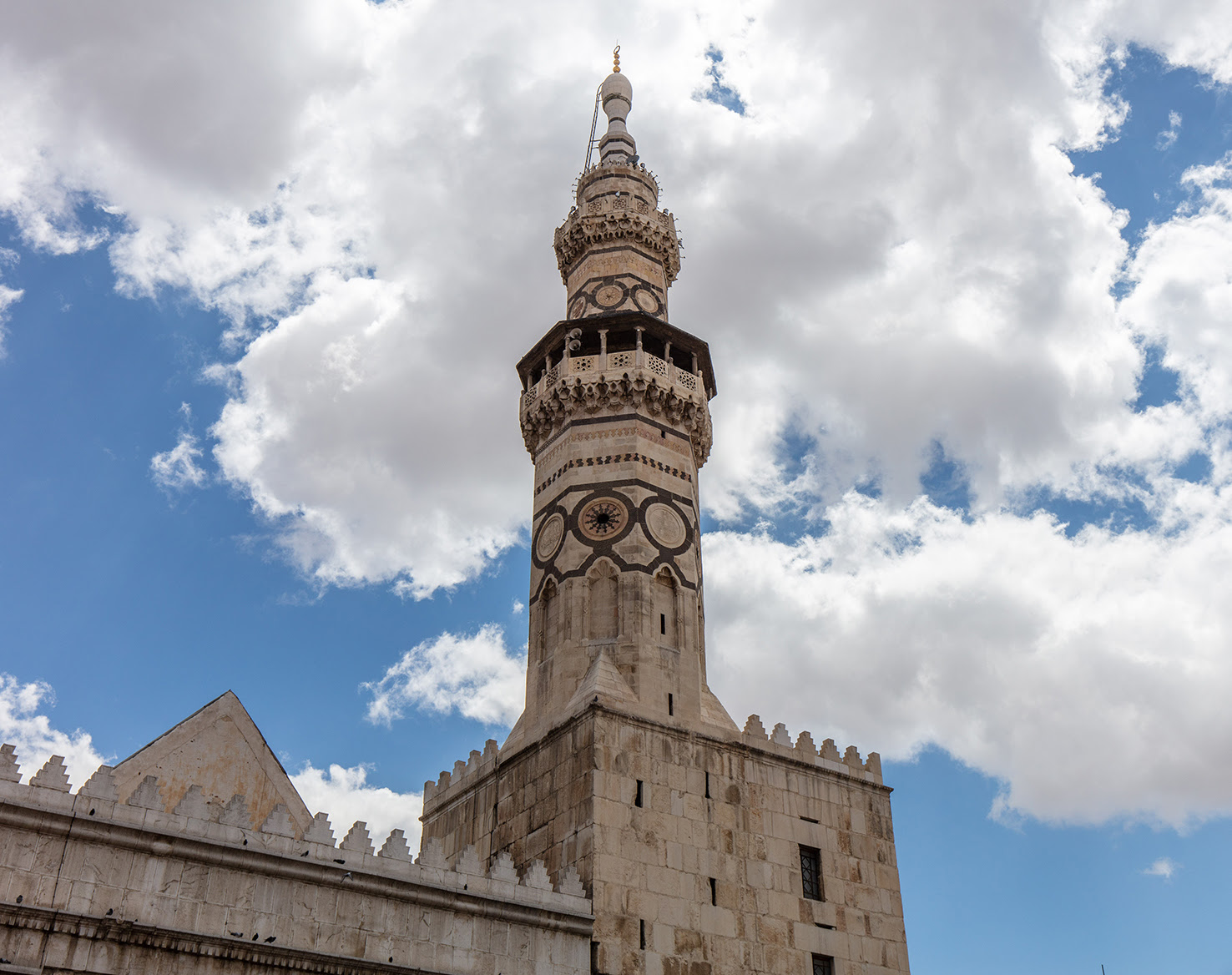 The Qaytbay minaret is photographed, in Syria’s Damascus (Zirrar/MEE)

Historically, each minaret would host three muezzins, each facing a different direction, and when it was time to make the call to pray, with nine muezzins in total, the city of old Damascus would have reverberated. 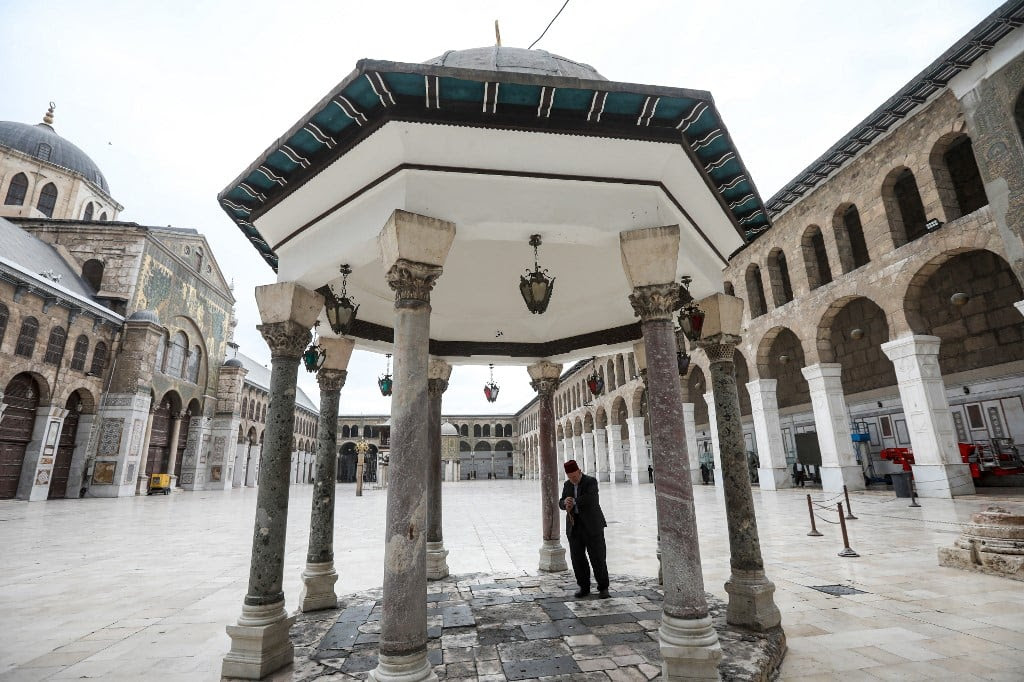 Mohammad Ali al-Sheikh, the eldest of the muezzins who call Muslims to prayer, checks his watch at the Umayyad Mosque in Damascus (AFP)

This technique ensured all of the old city would hear Adhan, the call to prayer.

This practice is somewhat preserved. These days, six to nine muezzins make the announcement together in a group with one microphone placed between them in a chamber located inside the prayer hall.

The religious significance of the mosque

Considered by some to be one of the holiest sites in Islam, the mosque is revered because of a saying by the prophet Mohammed, regarding the end of times.

The saying of the prophet, recorded by Ibn Taymiyya, makes mention of the mosque.

“Isa shall descend to his minaret [The Minaret of Isa] and he will point at the eastern minaret of the Umayyad mosque. It shall be white on that day.”

The mosque is also highly revered because it is believed that Saint John, or prophet Yahya in Islam, had his head buried in its grounds. 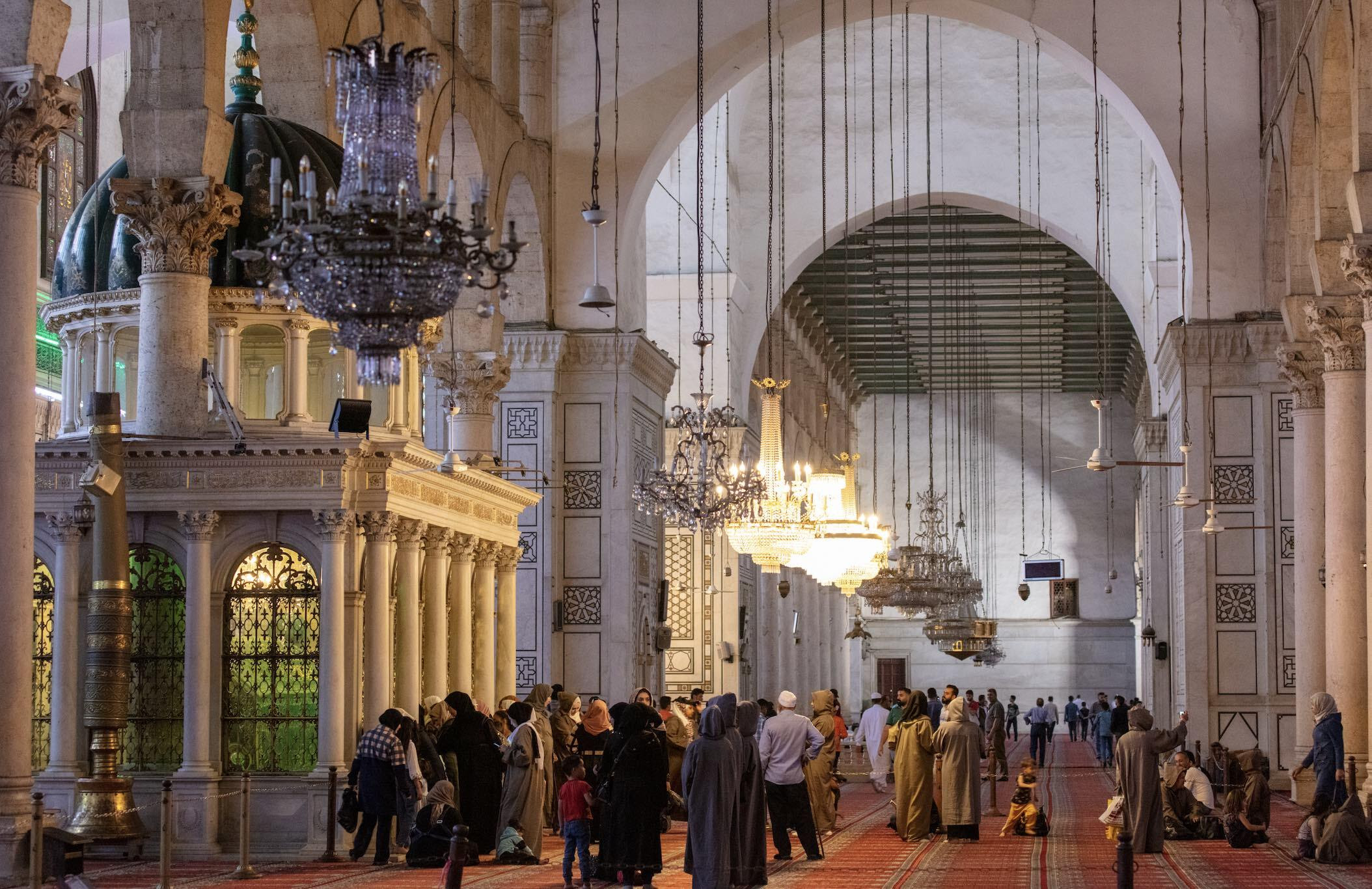 The interior of the mosque, near where prophet Yahya’s head was buried (Zirrar/MEE)

Walid later ordered for the head to be reburied after workers came across it. The spot where it was buried was marked with a wooden column known as al-Sakassek.

However, during the fire of 1893, the columns of the mosque were destroyed, and so the exact location was lost.

The current cenotaph marking the grave of Prophet Yahya was later added by the Ottomans. 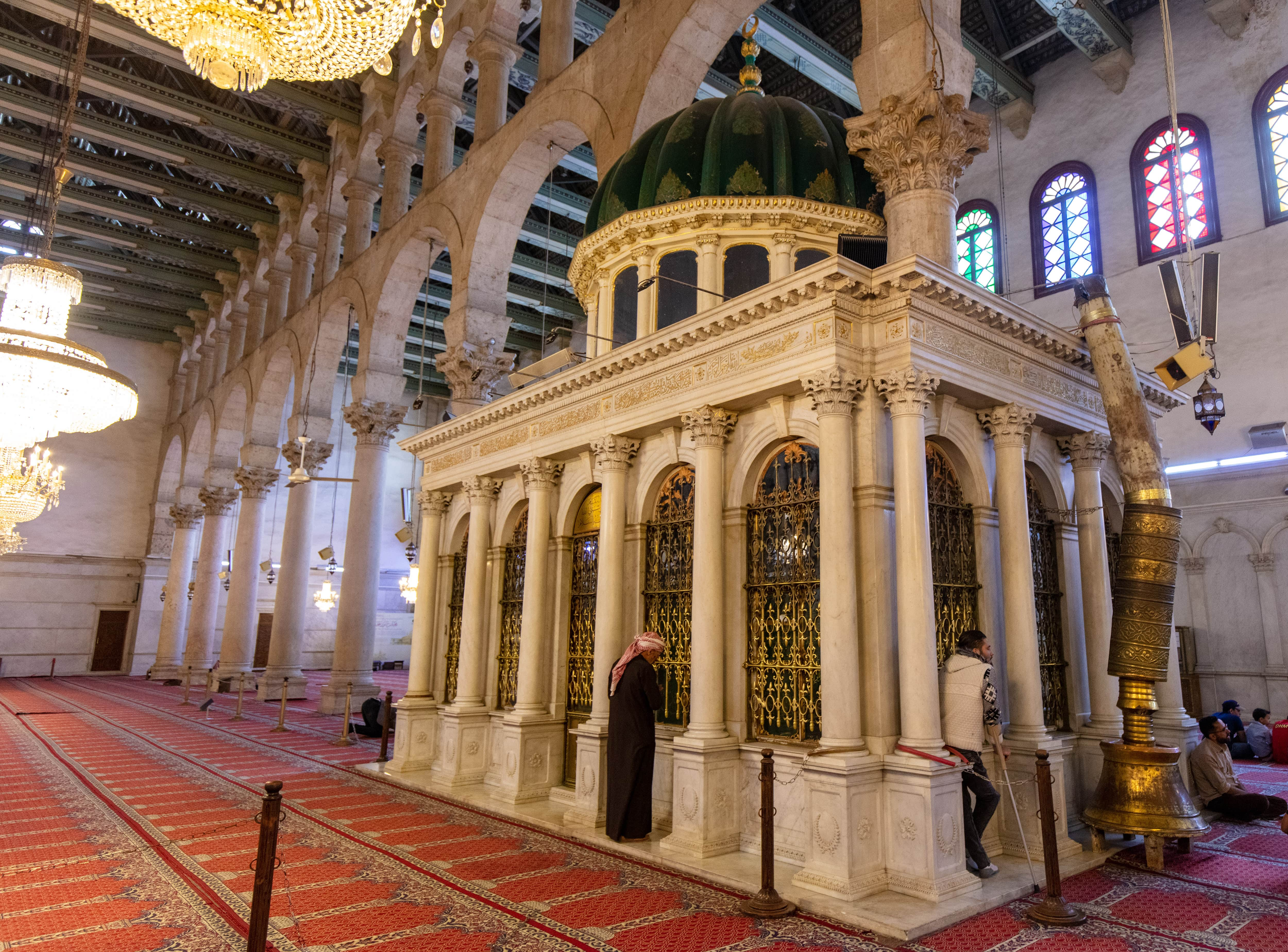 Over the course of its 1,300-year history, the Umayyad mosque has seen many great personalities come and go. While some passed through, others spent time as students or teachers.

The 14th-century Hanbali scholar Ibn Taymiyyah would give lessons to his students in the courtyard of the mosque, which attracted thousands. But almost, 200 years earlier, the great Abu Hamid al-Ghazali himself spent time here as a sweeper during his spiritual crisis. 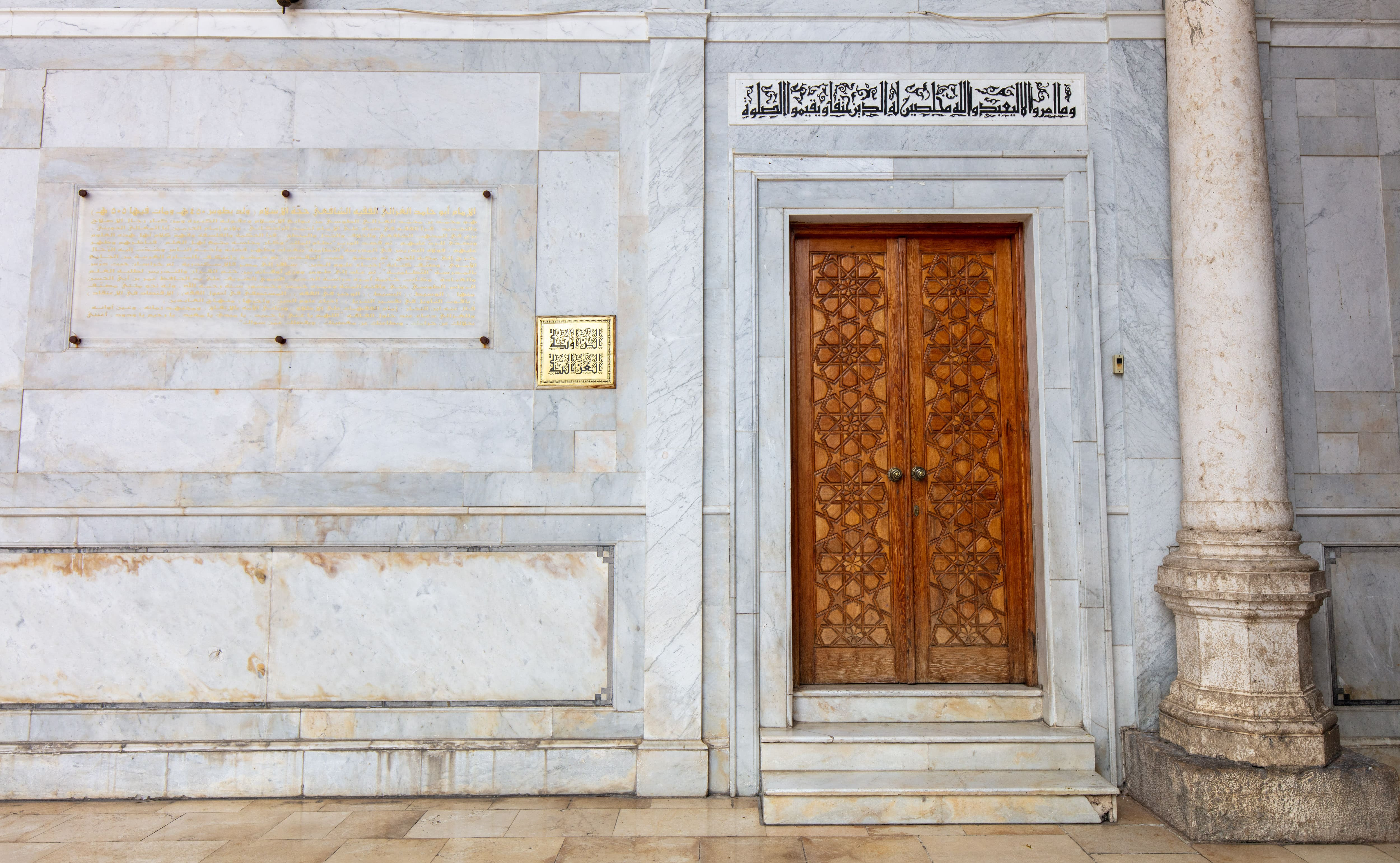 The entryway to Ghazali’s room in Damascus, Syria (Zirrar/MEE)

The room where he lodged is still identified and marked by a gold plaque on the inside of the western wall across from the Bayt Al-Mal.

The later history of the mosque

After the departure of the Umayyads, Damascus was governed by several dynasties, including the Abbasids, Seljuks, Ayyubids, Mamluks, and Ottomans, each performing much-needed restoration work on the Umayyad mosque, and sometimes making additions.

The most notable of these, beyond the imposing minaret of Qaytbay, is the Bayt al-Mal (“Dome of the Treasury”). This octagonal structure, standing on eight columns re-used from the Roman temple, was believed to have been built under the Abbasids, but modern research shows it was most likely constructed under the Umayyads.

The Umayyad mosque also has some sad episodes in its history. A room located within the eastern wall is where the family of Imam Ali was held prisoner by Yazid ibn Mu’awiya ibn Abi Sufyan for 60 days after the battle of Karbala.

The central wall within this room has a cavity, today lined with silver, where the head of Imam Hussain was temporarily placed before being buried.

Since its construction in 715, the mosque has also experienced three major fires.

The first took place in 1609, the second was started by Timur in 1401 after his conquest of Damascus. But the most devastating occurred in 1893. 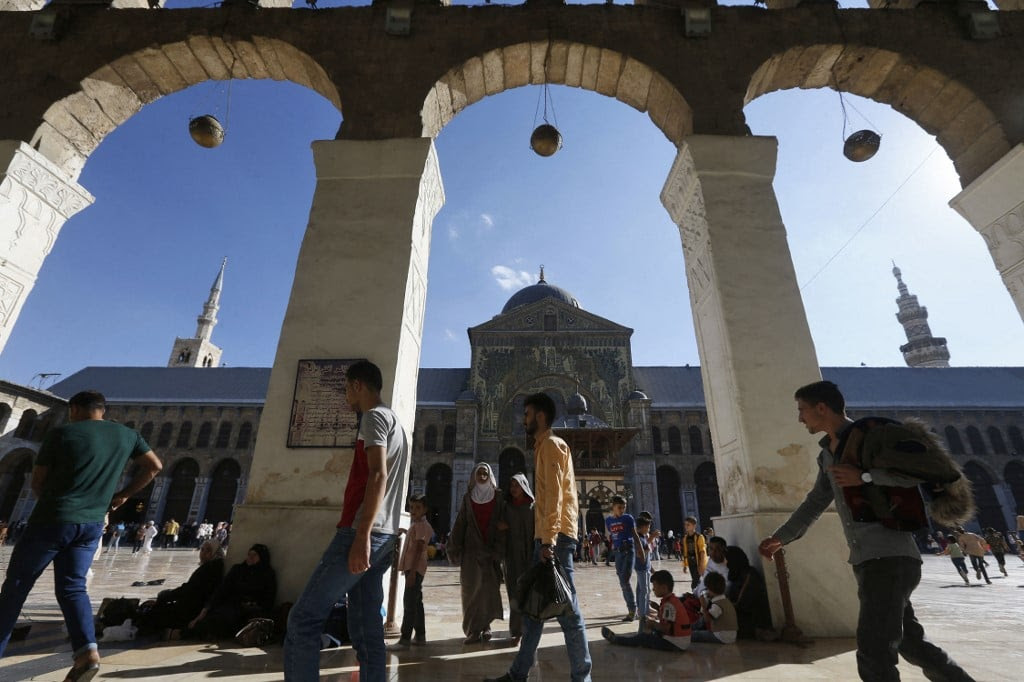 While some of the brilliant mosaic work survived the first two fires, almost all of it was destroyed in the fire of 1893, including the dome (later rebuilt in a late Ottoman style), the entire inner prayer halls, the beautiful mihrab described by Jubayr and the wooden minbar.

The rebuilding by the Ottomans took nine years and little attempt was made to restore the mosque to its former glory. 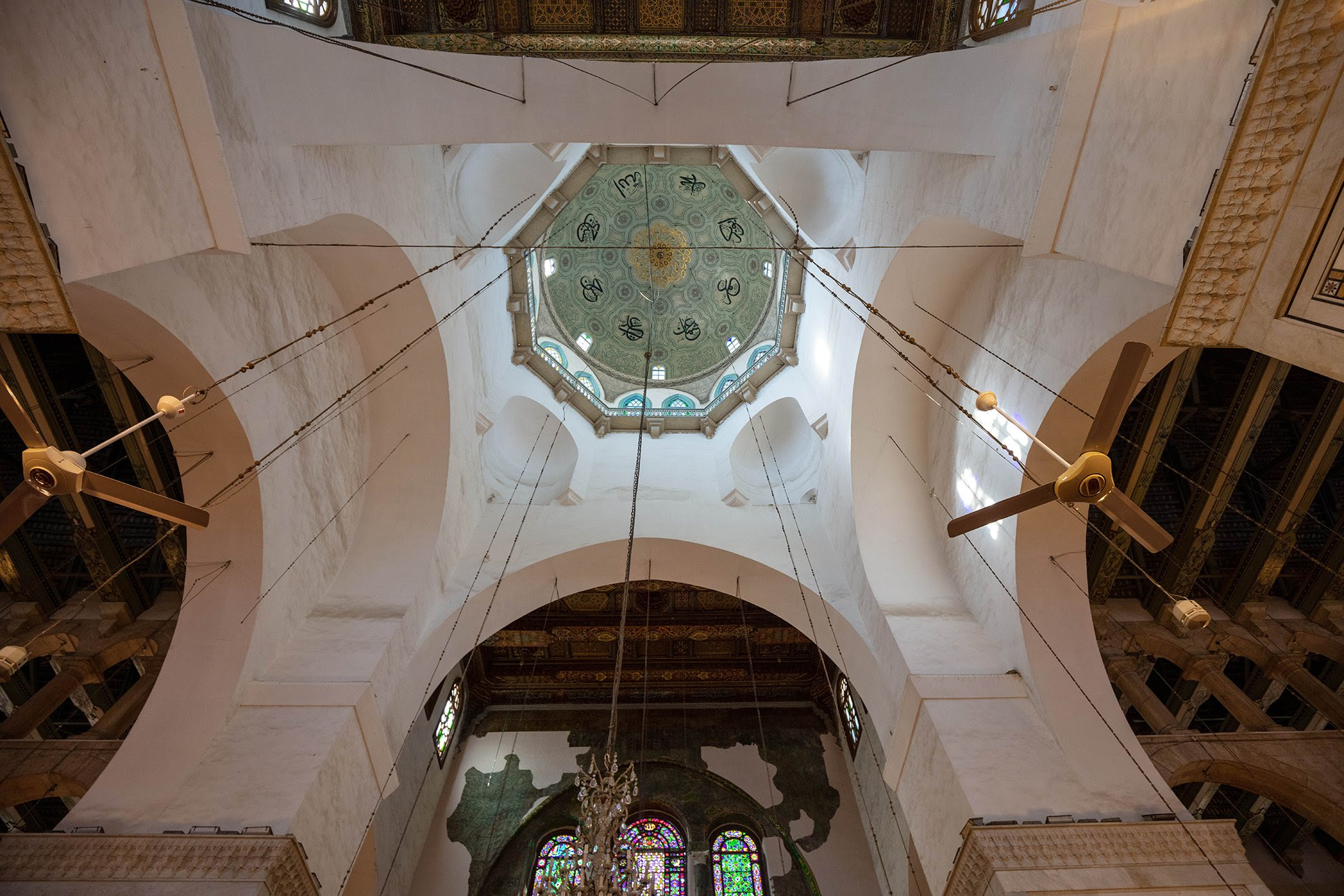 The inner dome of the mosque features colourful mosaics (Zirrar/AFP)

Only a few of the original mosaics have survived. One example is the central space above the women’s prayer area – but the dimly lit walls and ceiling make it hard to see how it once glittered.

This article is available in French on Middle East Eye French edition.

Disclaimer: Tracing the history behind the great Umayyad mosque of Damascus - Views expressed by writers in this section are their own and do not necessarily reflect Latheefarook.com point-of-view