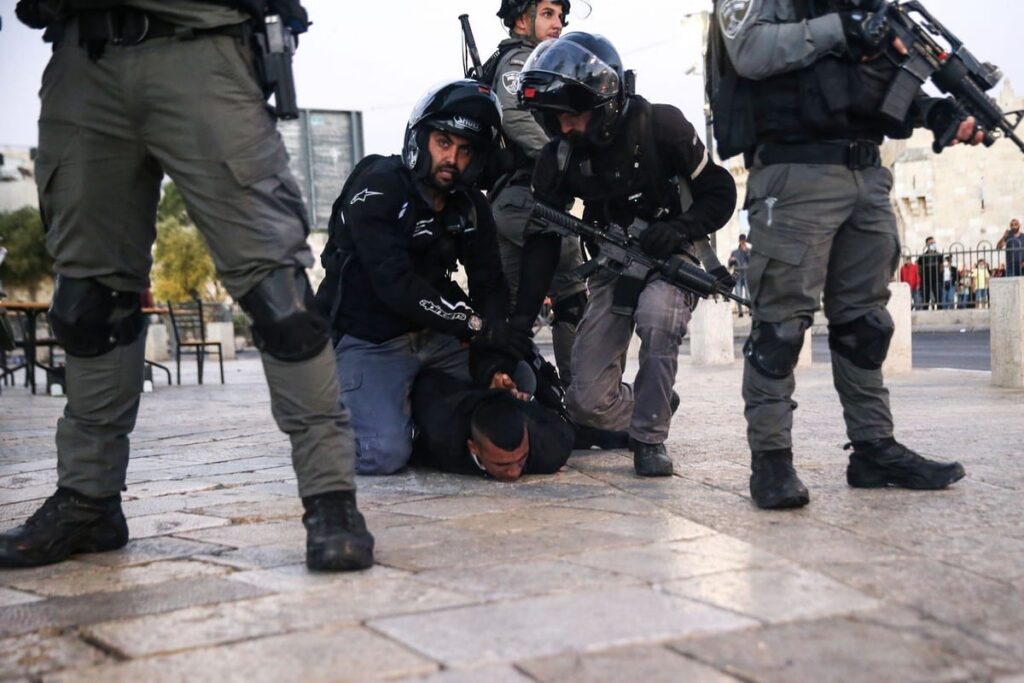 A Palestinian youth is detained by Israeli forces as a group of Palestinian gather to protest against far-right Israelis’ slogans insulting Prophet Muhammad during yesterday’s “flag march” at Damascus Gate in Old City of Jerusalem on June 17, 2021 [Mostafa Alkharouf / Anadolu Agency]

Go along with me on a thought experiment for a few minutes.

Imagine that British police forces permitted a crowd of thousands to march through an area of London with a high Jewish population chanting “Death to the Jews” and other similar violently bigoted obscenities.

Imagine such a group of racists parading through areas such as Golders Green or Stamford Hill spewing “May your shtetl burn” and threatening that a “second Holocaust” would come soon.

Then, imagine that the police, far from trying to stop such a poisonous event from taking place, actually took the side of the racists, protecting them as they went along. Imagine the police attacking not the racists, but instead a small group of anti-racist counter-protestors trying to voice objection to the anti-Jewish incitement taking place. Imagine the police assaulting the counter-protestors and snatching away their placards or flags.

Then, imagine that senior British politicians praised the police for allowing the racist demonstration to take place, bizarrely insisting that the “Death to the Jews” demonstration “had to be approved” and applauding the “excellent” management of the event.

Imagine that a well-known elected politician from an opposition party even attended the “Death to the Jews” demonstration himself. Imagine the same politician was recently exposed by the media as having praised 2018’s Pittsburgh synagogue shooting, in which 11 Jewish people were murdered in their place of worship.

Imagine the politician suffered no negative consequences as a result of the exposure of his genocidal anti-Jewish racism. If anything, his hatred seemed to endear him even more to his voters. His party gained more seats in parliament and came close to entering a coalition government during the subsequent election.

Imagine that all this took place not just once, but every year.

All of this is surely an impossible scenario.Well, yes. Thankfully, it’s certainly impossible in London, Paris, Berlin or New York.

But not in Israel.

With a few adjustments, the same appalling scene just took place in Jerusalem, the city that Israel claims as its capital. With one key difference: the gang of racist thugs were calling for “Death to the Arabs” not “Death to the Jews”, since they were themselves Jewish.

All this took place because Israel is an irredeemably racist state. A settler-colonial entity whose existence is premised on the violent expulsion and racist dispossession of the indigenous population of the land of Palestine.

One of the underreported aspects of the appalling festival of anti-Palestinian racism that we saw the Israeli government and police encourage in Jerusalem this week was the sheer age of the demonstrators chanting these filthy slogans.

The videos show young teens, and even children, chanting “Death to the Arabs” in Hebrew as they raged through eastern Jerusalem – the area of the city where the most Palestinians live.

The politician who joined them was Itamar Ben-Gvir, the leader of the Religious Zionism extremist party. Footage uncovered by Israeli television earlier this year showed Ben-Gvir dressing up as Baruch Goldstein.

Goldstein was a fanatical settler who came from Brooklyn, New York and massacred 29 Palestinians while they prayed in Hebron’s Ibrahimi Mosque in 1994.

This bloody terrorist act was actually rewarded by the Israeli Labor government of the day, as they imposed curfews on the city – not of the extremist Jewish settlers who plague that city, but of the native Palestinians who are the majority.

Yet – as I alluded to in my scenario above – Ben-Gvir suffered no damage to his political career, and came very close to entering a coalition government with the last Israeli prime minister, Benjamin Netanyahu.

Yet, such genocidal scenes among the mainstream of Israeli society and the state are met with little more than a shrug by the West’s hypocritical politicians. Thankfully, you cannot imagine the same silence were “Death to the Jews” demonstrations to be held.

In fact, the opposite is true. Israel’s supporters seem to actively invent, exaggerate and fabricate anti-Semitism in order to malign, smear and harass Palestinians and their supporters in the West.

As many activists have pointed out, there is more fear and condemnation in the mainstream in the US, Canada and European political cultures of Palestinian calls for freedom and equality than of genocidal Israeli calls for “Death to the Arabs”.

“From the River to the Sea, Palestine will be free” is a call for exactly what it says – freedom and equality for all in the entirety of historical Palestine. Yet those who use this honourable slogan are systematically demeaned and smeared as “anti-Semites”.Even the call for an “Intifada” or Palestinian uprising for freedom is slandered as “anti-Semitic” by Britain’s anti-Palestinian racists, such as Dave Rich of the Community Security Trust (a pro-Israel lobby group).

Until we impose and force a change on this hypocritical political culture that has been put into place by rut leaders, there is very little hope for change and freedom for Palestinians.

Disclaimer: 'Death to the Jews' would have caused an international scandal, yet Israel's incitement gets a free pass - Views expressed by writers in this section are their own and do not necessarily reflect Latheefarook.com point-of-view