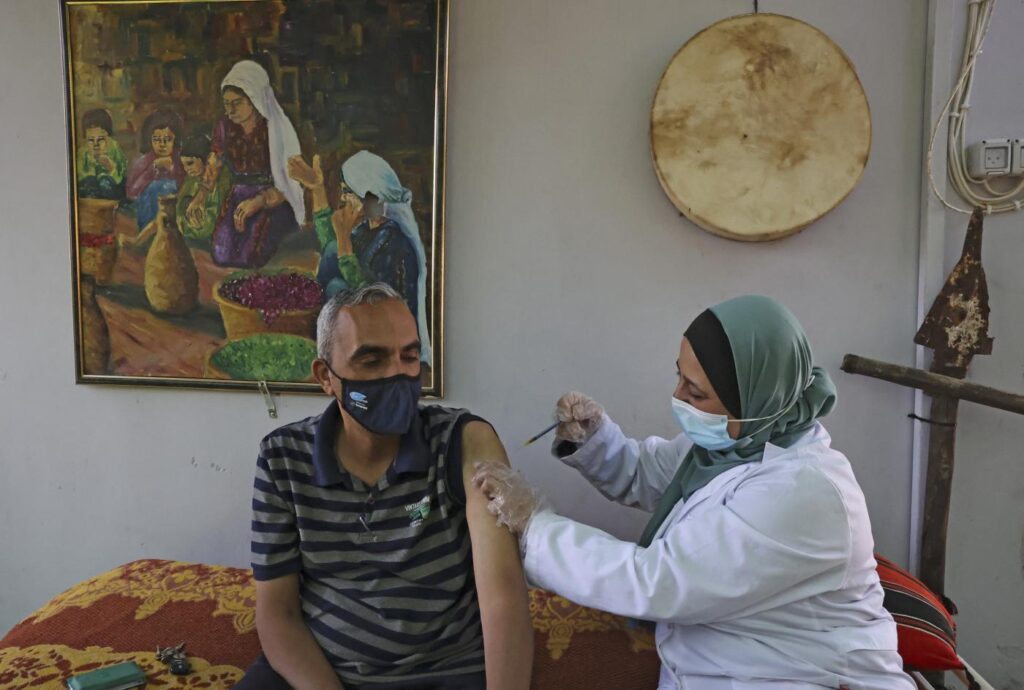 An elderly Palestinian man is vaccinated against the Covid-19 virus at his home near Hebron, in the occupied West Bank, on 9 June 2021 (AFP)

Israel’s attempt to swap soon-to-expire Covid-19 vaccines with a future shipment of Pfizer doses earmarked for Palestinians in the occupied West Bank has sparked outrage on social media.

On Friday, the Palestinian Authority (PA) called off plans to receive one million expiring vaccines, just hours after the deal was struck.

PA spokesman Ibrahim Melhem announced the cancellation at a joint press conference with Minister of Health Mai Alkaila, stating that the initial doses that were sent did not meet agreed-upon specifications.

Israel was clear that the vaccine doses were to “expire soon” when the deal was agreed, but did not publicly specify a date.

After receiving the first shipment, the Palestinians said the doses were set to expire sooner than they expected.

The swap attempt has since been described as “inhumane” and “racist” by social media users, who have denounced it as a cynical PR attempt by the Israeli government.

“What is more cynical and twisted than giving the people you oppress and occupy nearly expired vaccines so you can get their new vaccines later in the year,” said Salem Barahmeh, executive director of the Palestine Institute for Public Diplomacy.

“Palestinians were demanding vaccines for months, but Israel equates us with its discard pile. It sees us as lesser than human.”

Several observers criticised the Israeli government for appearing to spin the move as an altruistic gesture.

“Israel is a state that when it claims it is doing good it is actually doing bad. It just can’t help itself,” wrote Asad Abukhalil, professor at California State University.

Others condemned pro-Israel advocates for tweeting praise while failing to include context about the expiry status of the vaccines.

Right-wing US senator and former presidential candidate Marco Rubio was labelled “extremely cynical” after he described the shipment as apparent evidence of Israel’s “commitment to improve the lives of the Palestinian people”.

Meanwhile, the AIPAC-linked Democratic Majority for Israel used a popular Star Wars meme in an effort to mock the PA for not accepting the vaccines.

Several users replied with an amended version of the meme, which the Democratic super PAC initially tried to restrict on Twitter.

In another meme reaction, one user created a cartoon with the caption: “If we don’t sell you expired vaccines, someone else will”.

The comment was a reference to a viral interaction between Palestinian activist and Sheikh Jarrah resident Mona el-Kurd, and Israeli settler Yaakov Fauci, who is squatting in the Kurd family’s home.

‘They’re not doing us a favour’

Mona’s twin brother Mohammed el-Kurd tweeted on Saturday that the shipment was falsely being framed as an act of humanitarian goodwill.

“This isn’t a charity. The occupation authorities will take over the PA’s incoming shipment of perfectly good vaccines. They’re not doing us a favour,” he said.

Israel has fully reopened after vaccinating some 85 percent of its adult population. However, it has faced criticism for not sharing its vaccines with the 4.5 million Palestinians in the occupied West Bank and Gaza.

Under international law, occupying powers are responsible for the health care of the population they control.

“Were we not living under brutal colonialism, we wouldn’t need coloniser-provided healthcare. This shipment of vaccines is entirely too many months too late,” Kurd said.

“Even if the vax weren’t expired.. even if Israelis cured every cancer ever, the material reality doesn’t change: Zionist colonialism and military rule continue to destabilise and destroy our physical and psychological health.”

Disclaimer: 'Dumping ground': Israel blasted for bid to swap expiring Covid-19 vaccines with PA By Rayhan Uddin - Views expressed by writers in this section are their own and do not necessarily reflect Latheefarook.com point-of-view