In the living room of their tin-roof house in the south of Gaza City, Hamed Tulba sits holding his deceased child’s new clothes.

Mahmoud, 15, was killed by an Israeli air strike one day before wearing them for the Eid celebrations. He was on his way back home after he got a haircut for Eid at his cousin’s nearby barbershop, on 13 May, when an Israeli bomb struck the road near his home.

The attack took place at around 9pm, shortly after the Iftar (fast-breaking) meal on the last day of Ramadan, the eve of the Eid al-Fitr celebration.

‘There were hundreds of people in the street, and the attack took place without any prior notice’

“He went shopping with his mother and younger brother early this Ramadan to buy new clothes for Eid,” Mahmoud’s father, 46, told Middle East Eye. “He insisted on choosing them himself and got jeans, pants and a red t-shirt with sport shoes. He only wore them once in the fitting room.”

“He asked his mother to make him kahk [Eid cookies] two days before he was killed. He helped her kneading the dough. When they baked the kahk, he ate so much that he was too full to have his suhour [pre-fast meal],” he said.

“I told my wife that they had made way too much kahk. Little did I know that we would serve it to the people who visited to console us after his killing.” 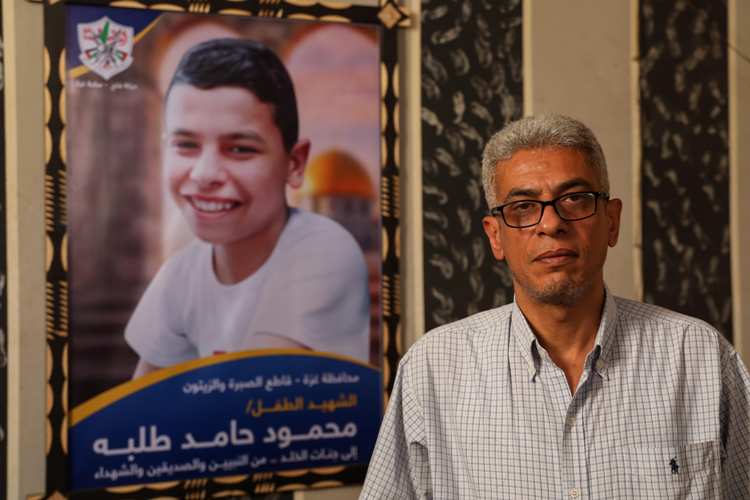 Hamed Tulba, standing in front of a poster of his deceased son Mahmoud in his home in Gaza City (MEE/Mohammed Hajjar)

Tulba’s elder brother who lives in the same neighbourhood was visiting him on Eid’s eve. They were sitting in the living room when they heard “a massive explosion that shook the entire house”.

“After the explosion rocked the place, I heard hundreds of shrapnel falling on our roof. I knew the bombing was in the neighbourhood because it was unbelievably loud, and I was sure that if it was not my son who was killed, it would certainly be a relative of mine,” Tulba continued.

“I rushed outside and saw my nephew, the barbershop owner, running with his hand injured and covered in blood. He asked about Mahmoud who had just left his shop but we could not see him.”

Tulba’s eldest son, Wadee, 22, found Mahmoud lying on the ground. Both his head and neck were bleeding.

“Once Wadee saw his brother bleeding and unconscious, he was in a hysteric state. He was so badly injured that I thought he was already dead. The neighbours stopped a car passing by and put Mahmoud along with a number of wounded people in it. They rushed to the hospital and we followed them in another car.”

The Israeli air strike directly hit the road opposite Mahmoud’s home. Three people were killed and at least fifty others were injured in the same attack, according to eyewitnesses.

“There are five barbershops in our neighbourhood, and you can imagine the number of people in and around these shops on Eid’s eve,” Tulba said. “There were hundreds of people in the street, and the attack took place without any prior notice.”

While Tulba’s wife, Umm Wadee, was waiting to know that their son was not hurt, she received the news that he was killed.

“My wife was standing by the house door asking people in the street to look for our son. I had to tell her before going to the hospital that we lost him. I tried to be very calm and not show any emotions because I did not want to collapse in front of people.” Tulba added. “But she could not handle it.”

Mahmoud’s mother was sleeping when the attack took place. She woke up to the explosion and rushed to the street to look for her son.

“I found Fadi, our relative and the barbershop owner, bleeding near our door. I asked him where Mahmoud was and he told me that he did not find him,” she told MEE.

“I could not believe it. I asked him, how could you not find him? I wanted to run and look for him, but I could not see anything, it was very dark, and dust and blood were everywhere. My step brother asked me to get in the house and promised to look for him.”

A few minutes later, Wadee, her eldest son, came back home after he found Mahmoud. But he wished he had not seen him in that state.

“Wadee came in a miserable state, he told me that he found Mahmoud but could not recognise him at first,” she recalled. “He saw a child lying on the ground with his skull broken open. He tried to figure out who he was, and only when he recognised the mobile in his hand did he realise that it was his brother.”

‘A mother’s heart cannot handle this’

Mahmoud’s family thought that he was already dead. But he was transferred to the hospital with severe injuries and stayed in intensive care for another 24 hours.

“They told me that he was killed. I tried to stay calm, but you know a mother’s heart cannot handle this,” Umm Wadee continued.

“My husband and his brothers went to the al-Shifa hospital. They looked for Mahmoud in the morgue but did not find him. About an hour later, the Indonesian Hospital announced that they had received a severely injured unidentified child. It was him.”

But Umm Wadee could not believe that her son was still alive.

“They told me that he was only injured, not dead, but I did not believe them. I told them that I would not believe them until I saw him. But the bombing was intensive and there were no taxis in the street,” she added. 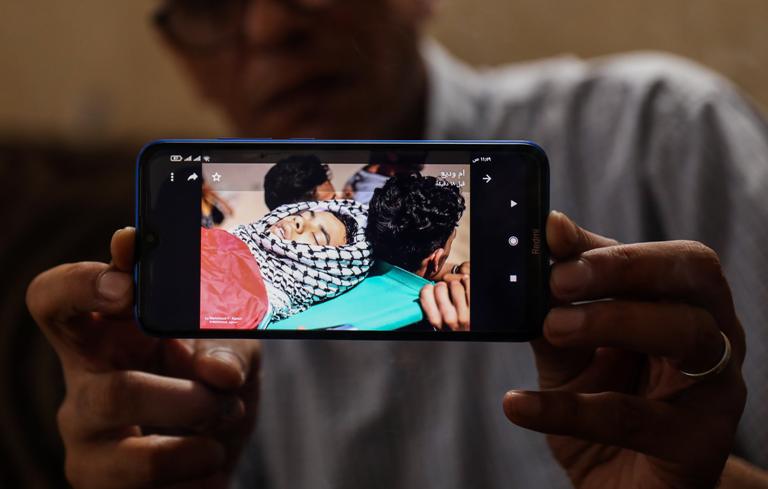 “My husband was in the hospital. He asked his brother to fetch me because he knew that if I had to run to the hospital barefoot, I would do it. I went there but he was undergoing a serious surgery and they did not allow us to see him until the next day.”

Having been informed by the doctors that their son may not be able to make it, Tulba started to prepare his wife for the news.

“My husband started telling me that if Mahmoud lived, he would suffer a lot and live with a disability that we would need to carry him everywhere,” she said. “But that did not make it any easier for me to accept his death. I did not mind carrying him on my head for the rest of my life.”

On the next day, doctors allowed Mahmoud’s family to see him for the last time before he passed away.

“It was a tough moment because Mahmoud was the kindest one of my children. I am not saying this because we lost him, but everyone knows what a helpful, polite and well-disciplined child he was,” his father said.

“He loved to stay with his mother in the kitchen to help her. He enjoyed cutting potatoes and vegetables and always made jokes, imitating chefs on social media.”

Mahmoud’s uncle, Adel, said that he depended on Mahmoud to do the grocery shopping although he has children.

“Because we live just next to their house, Mahmoud heard my wife every time she shouted at my children who refused to obey her and buy her stuff from the supermarket,” he said. “He always took the initiative and told her: ‘I heard you asking my cousins to buy something, tell me what you want, and I will buy it for you.’”

“He was an exceptional child.” 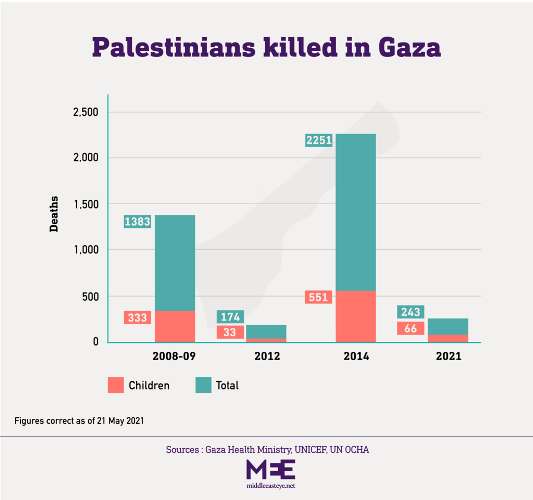 A few metres away from the Tulba family’s house, lives the Khalifa family, they lost a child who was a friend of Mahmoud’s in the same attack.

Yahya, 13, was on his way to the market to buy yogurt for his two-year-old nephew when the air strike hit the road.

“My grandson, Mazen, was crying, so Yahya went to buy him yogurt to eat before it got too late. Only one minute after he left the house, we heard the massive explosion shaking the neighbourhood,” Yahya’s father, Mazen, 48, told MEE. 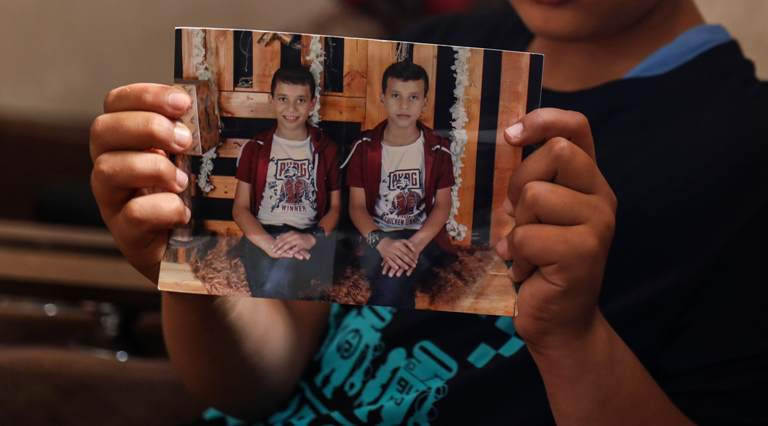 “My other son rushed to the street looking for him. We were hoping that he would be far from the attack, but he found him lying on the ground with his little body torn into pieces,” he added.

Yahya’s brother, Mustafa, recalled the moment when he found him lying dead on the ground, among dozens of killed and injured neighbours.

“I was running in the street and people killed and injured were everywhere. The blood covered my feet, and it was too dark that I hardly found Yahya,” Mustafa, 18, said.

“I held him with my hands. His back was open, and part of his shoulder was dislocated,” he said, bursting into tears.

“I lived 18 years, and this was the most horrific scene I have seen and will ever see in my entire life. Since that moment, I try not to leave the house so that I won’t have to remember the scene when I see that place.”

Mustafa quit his work as a salesman in a women’s clothes shop a few days after the attack.

“I could not speak to people and act normal. I could not see anyone, or deal with people who keep asking me what happened and how my brother was killed. I cannot forget him but I want at least to forget that scene.”

When the attack took place, Yahya’s mother was near the window. She fell to the ground and lost sight due to the heavy smoke and dust.

“I could not open my eyes because the dust and smoke were everywhere in the house. It was very dark, and I could not see anything, I started crawling until I reached the door and found my husband,” Asmaa Khalifa, Yahya’s mother, told MEE.

‘Yahya could not wait for Eid, what did he do to be killed in this horrible way and prevented from celebrating it?’

“My youngest son, Moatassem, who is three years younger than Yahya and who was very close to him saw him on the ground, covered in blood. He came back home horrified and shocked. Once he reached the door and saw me, he passed out.”

As a result of the shock, Moatassem started to suffer post-traumatic stress disorder (PTSD), losing appetite, and shouting his deceased brother’s name during his sleep.

“I took him to a psychiatrist after he started to show an abnormal behaviour. Sometimes in the midst of laughing he starts screaming angrily without a reason. He cries all the time and is still experiencing the deep shock.”

After Yahya’s family found his body, the neighbours directly took it to the hospital’s morgue to be buried next.

“The buried him on the next day. When my husband came back from the funeral, neighbours in the street called him and told him ‘Your son’s flesh is on the electricity pillar,” she continued. “He went there and saw a piece of flesh hung on the pillar, he took it with a piece of cloth and went back to Yahya’s tomb and buried it.”

A few days before he was killed, Yahya had bought a second-hand bicycle for Eid, after having saved his daily pocket money for two months.

“He bought the bike for 60 shekels ($19). For weeks he kept himself from buying chocolate or chips like his friends, only to save his pocket money to buy it,” Asmaa said. “He waited to ride his bike and bought tiny LED lights to hang them on it to celebrate the Eid. But he left before he could do any of this.”

“Yahya could not wait for Eid, what did he do to be killed in this horrible way and prevented from celebrating it?”

Disclaimer: Gaza: Families of two boys killed in Israeli attack left traumatised By Maha Hussaini in Gaza - Views expressed by writers in this section are their own and do not necessarily reflect Latheefarook.com point-of-view