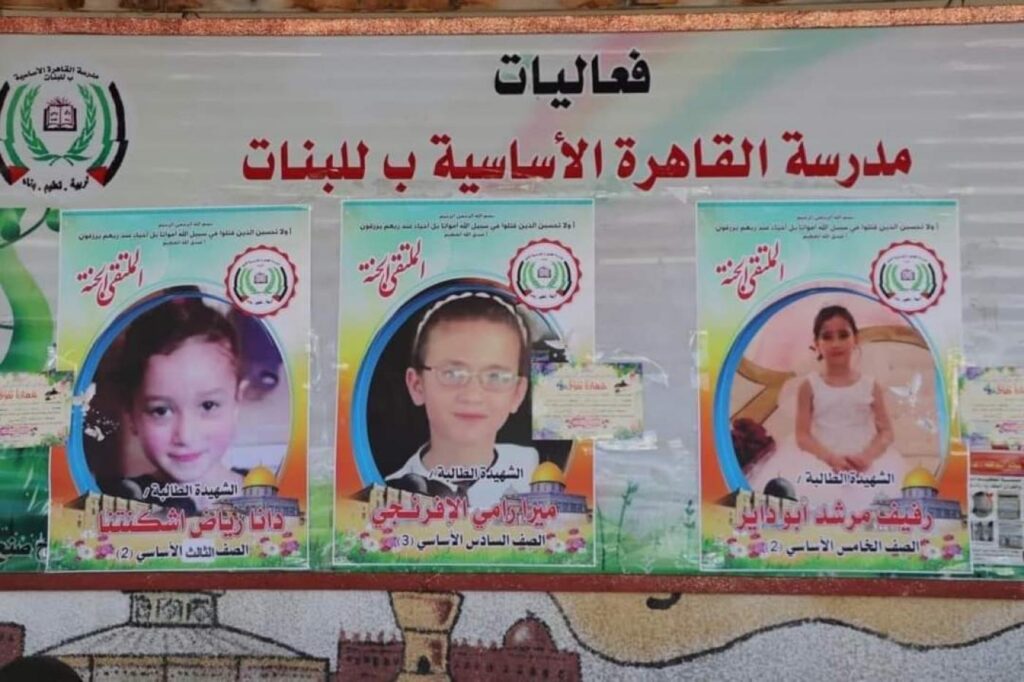 The recent Israeli bombardment of the Gaza Strip has devastated the lives of school-age children, who make up over half the population of the besieged enclave.

The attacks last month killed at least 248 Palestinians in Gaza, including 66 children. Israeli forces did not spare residential buildings, civilian infrastructure, or places of learning, with some 187 schools, including 55 pre-schools, destroyed or damaged by the bombings.

Palestinian students in Gaza already had their educations interrupted due to the coronavirus pandemic, with schools closing several times due to a surge in Covid-19 cases and deaths. The attacks last month  have caused further disruption and devastation.

Some children in Gaza have gone back to school in recent days to pick up their end-of-year certificates, but many were left grieving classmates who had not returned.

The al-Qahira primary school displayed pictures of three of its students who had been killed in Israeli strikes next to their certificates.

Two of the students, Mira Rami al-Ifranji, 16, and Dana Riad Hasan Ishkantna, 9, were killed on 16 May by air raids on al-Wahda Street in central Gaza City.

Mira was an aspiring dentist, according to a New York Times profile of the victims. Dana was killed – along with three siblings and her mother – while dressed up in her new Eid outfit.

Fellow student Rafeef Murshed Abu Dayer, 10, was killed in the same area the next day after shrapnel hit her and her two brothers while they were having lunch in the garden of the Ghazi Shawa building. The 10-year-old had been receiving trauma counselling from the Norweigan Refugee Council.

“When I’d watch TV with my dad, I’d see the dead bodies on TV. I used to feel sad, I’d start to scream and shout, those images will never leave my head,” one child said.

One Gaza resident said that his two daughters, aged 12 and 16, were too scared to go to the bathroom by themselves.

“They both go together and I have to stand outside holding the door, just to show them that my hand is there and I’m with them,” he said.

Sammy Ouaidy, a child psychologist in Gaza, told MEE that children had been wetting themselves and showing several signs of trauma and anxiety.

“We have a specific situation in Gaza, which I call the Gaza Syndrome, because we don’t have anything such as PTSD or symptoms after the trauma,” Ouaidy said. “We’re living in a continuous cycle of trauma, over a generation, from 1948 until now.”

Disclaimer: Gaza school commemorates students killed by Israel's strikes By Rayhan Uddin - Views expressed by writers in this section are their own and do not necessarily reflect Latheefarook.com point-of-view