Skip to content
PALESTINE
Spread the love
A new generation of Palestinians, born after Oslo and disconnected from the leadership in Ramallah, is powering a fundamental change 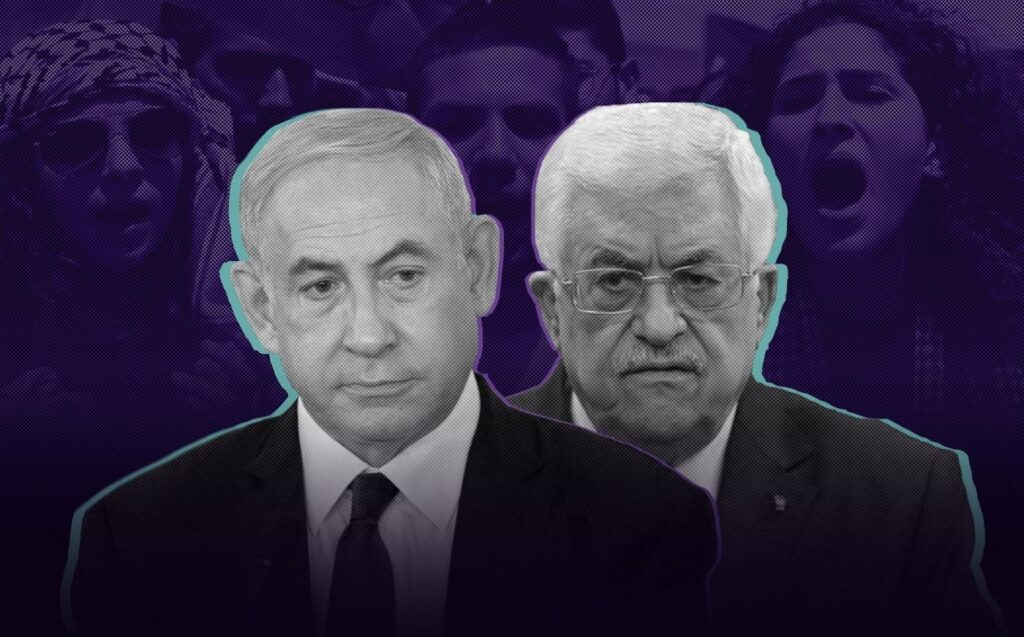 The losers of the Gaza war – Israel and the Palestinian Authority (PA) – have each responded to the demonstrations that took place in Jerusalem, Ramallah and throughout the occupied West Bank during those 11 days with the use of maximum force. “Calm” has been restored to Palestinian quarters of towns and villages in Israel and the occupied West Bank through mass arrests.

At the last count, Israeli forces had arrested more than 2,100 Palestinians within Israel, 1800 in the occupied West Bank, Jerusalem and inside Israel since last April. In addition the Ramallah-based Lawyers for Justice reports that 20 Palestinians have been arrested by the PA preventative security, mostly for “inciting sectarian strife” and “slander” against the PA.

Police at the Nazareth station created what Adalah, the legal centre for Arab minority rights in Israel, called a “torture room”. Detainees were reportedly led to a room on the left side of the station’s entrance corridor, and forced to sit on the floor handcuffed and to lower their heads towards the floor.

Police officers then “began to beat them on all parts of their bodies, using kicks and clubs, slamming their heads against walls or doors, and more. Officers wounded the detainees, terrorized them, and whomever dared to lift his head upwards risked more beatings by officers. According to affidavits, the floor of the room was covered in blood from the beatings,” Adalah noted.

According to the Palestinian Prisoners and Ex-Prisoners Affairs Authority, the recent arrests across the country “were accompanied by brutal attacks, including insults, beatings, and vandalism of the contents of citizens’ homes and property”.

But neither Israel nor the PA have yet managed to restore order in the way they have traditionally understood the concept. This is because they are finding that there is no “new normal” to return to; something has fundamentally changed.

The status quo that for decades served Israel’s expansionist interests and those of its western backers, who nurtured the myth that a two-state solution could be achieved under the right alignment of the stars, is crumbling.

This status quo has consisted of a complete nuclear fuel cycle: Palestinian evictions and Jewish settlements in salami slices; short bombing campaigns to “mow the lawn” of Palestinian armed resistance; and talks that extract cumulative concessions from the Palestinian leadership, laying the groundwork for more settlements, as Palestinian negotiators had already surrendered the point.

The natural order of occupation is coming to an end. On both the Israeli and Palestinian side alike, the collapse of this order is taking place simultaneously in processes that are linked, but still independent of each other.

After four inconclusive elections, Israel itself is in ferment. The prime minister-designate, Naftali Bennett, and his deputy in Yamina, Ayelet Shaked, have been assigned extra police protection as the head of Shin Bet, Israel’s internal security service, warned that rising incitement on social media could lead to “violent action”.

Parallels are being drawn to the assassination of Yitzhak Rabin – but unlike those days, when Israel was dominated by two main parties, Labor and Likud, the Knesset today is fractured into various small parties. The biggest is Likud, which won 30 seats in the last election.

The incitement is being orchestrated by the clan around the outgoing prime minister, Benjamin Netanyahu. Hagi Ben-Artzi, the brother of Sara Netanyahu, the prime minister’s wife, said that Bennett’s intention to partner with the centrist Yair Lapid met the biblical definition of “treason”. Netanyahu’s son, Yair, has had his Instagram and Twitter accounts suspended temporarily after he published the home address of Nir Orbach, a Knesset member from the Yamina party.

In echoes of former US President Donald Trump’s refusal to acknowledge defeat, Netanyahu said Israel was witnessing the “greatest election fraud” in history. Netanyahu is treating his imminent ouster as an existential threat to Israel itself, even invoking the story of Moses; those who opposed him were punished by God when the ground opened up and swallowed them.

Similar apocalyptic events await Israel itself. Netanyahu has described the new government led by the far-right Bennett as a “dangerous left-wing government” backed by “terror supporters” who would be incapable of standing up to Israel’s enemies, such as Iran (one of those “terror supporters”, Mansour Abbas, is a Palestinian Knesset member who Netanyahu himself has assiduously cultivated.)

Veteran political analyst and MEE commentator Meron Rapoport said that while Netanyahu built his political base on extreme polarisation, the discourse of hatred is now eating the right-wing itself.

“The incitement is very, very aggressive. But what is interesting is that this discourse of polarisation has entered the right camp itself,” Rapoport said, noting that Netanyahu believes his only way to maintain power is to call Bennett a traitor, while at the same time, his supporters are threatening to kill Knesset members. “Because they hail from the same right-wing camp and were close to each other, the anger and sense of betrayal are even stronger.”

Another MEE commentator, Orly Noy, noted: “Netanyahu broke everything that was considered state-owned, such as the justice system and the police. This means complete chaos in all systems. He broke all the tools that once preserved Jewish statehood. And now we are seeing the fruits of his work.”

According to Rapoport, if Netanyahu succeeds in destroying the coalition government before it is sworn in, Israel itself will become a failed state. “Half of the Israelis who voted for the change government will think that Netanyahu’s rule is illegitimate in a situation that is close to how the Palestinians see the regime in Israel,” he said. “Israel will approach disintegration, so we are in a dramatic moment. If he tries to prevent the change of government, I think the institutions are strong enough to overlap with Netanyahu, but it is not certain. It is [a] very dramatic time and one of the Knesset members could be harmed.”

The collapse in political leadership is no less significant on the Palestinian side in Ramallah. The PA leadership in general, and President Mahmoud Abbas in particular, is attempting to smother a wave of anger at all levels of Fatah. Most of it is circulating on private WhatsApp groups.

One Fatah loyalist, who at one time held a senior position and spoke on condition of anonymity, told MEE: “The people of Fatah are very angry. What Hamas is doing now is what Fatah did during the First Intifada. Fatah believed in the struggle against occupation, in liberation, in the armed struggle. What Abu Mazen has done is to empty Fatah of any meaning, any purpose, any fight for freedom or liberation.

For Biden and Blinken, the message is clear: The days when the leadership of the Palestinian people could be fixed in advance by a candidate agreeable to them and to Israel are gone

Most of that frustration is below the surface, but some of it is public. Nasser al-Qudwa, a former member of Fatah’s central committee, Palestinian representative to the UN and foreign minister, was kicked out of Fatah for refusing to run under a list headed by the Palestinian president, but he still regards himself as “Fatah to the bone”. He is late Palestinian leader Yasser Arafat’s nephew.

I asked him whether the 85-year-old Abbas was still fit to lead his people after postponing what would have been the first Palestinian elections in 14 years. Qudwa replied: “Well, I wouldn’t like to personalise things, but I think the current situation is untenable. We need to change, and change in my mind means changing persons, personalities; changing policies, as well as changing positions. The continuation of what we have now will lead to only more problems and more catastrophes for the Palestinian people.”

Had those elections gone ahead, Qudwa has no doubt that his list would have done better than Abbas’s – and that had presidential elections followed and Marwan Barghouti put his name forward from Israeli prison, he would have won.

The failures of Abbas

Another sign of Abbas’s draining authority was a recent letter calling on him to stand down, written by leading Palestinian academics. It has since gotten more than 3,000 signatures. It was, of course, more than just a letter; it was the start of a campaign to rebuild the Palestine Liberation Organisation (PLO).

Their statement noted that Abbas was the most significant absentee during recent events, including an uprising in Jerusalem over evictions in Sheikh Jarrah and incursions by armed settlers into al-Aqsa Mosque.

“After the battle was over, Abbas added to his political record another failure by failing to show solidarity with the suffering of the Palestinian people,” the letter stated. “He did not bother visiting the families of martyrs in Gaza and the West Bank. It was a national and golden opportunity to visit the Gaza Strip, seizing this moment and considering it the beginning of ending the division, but instead, he revealed the depth of the self-paralysis in which the president placed himself.”

A new generation of Palestinians is powering this change. They were born after Oslo, and are utterly disconnected from Ramallah and its leadership. Even Ramallah, considered the Tel Aviv of the occupied West Bank, saw demonstrations by thousands of Palestinians in a visible affront to its silent and absent president. This stings because it is true, and it is not coming from Hamas.

This generation regards itself as one people from the river to the sea. While Abbas applies to Israel for permission each time he moves with his security detail within the occupied West Bank, this generation does not limit itself to walls and checkpoints imposed by the occupying power. Jerusalemites and Palestinians from 1948 are not under Abbas’s control, let alone that of Fatah or the defunct PLO.

“We have the right to pause now and ask: what is the result? And what did the president achieve for his people? What rights have I got?” the statement by the Palestinian academics asked.

Abbas should indeed go, if only to preserve Fatah’s legacy as a liberation organisation. US President Joe Biden and his secretary of state, Tony Blinken – two other absentee landlords of the Palestinian conflict – will not save him, nor will all the tax money that Israel gives him and all the patronage that flows from that.

Abbas and the entire current leadership of the PA can do neither. To keep them in power is to maintain one of the essential ingredients of Israel’s occupation.

Disclaimer: Israel-Palestine: The natural order of occupation is coming to an end by David Hearst - Views expressed by writers in this section are their own and do not necessarily reflect Latheefarook.com point-of-view