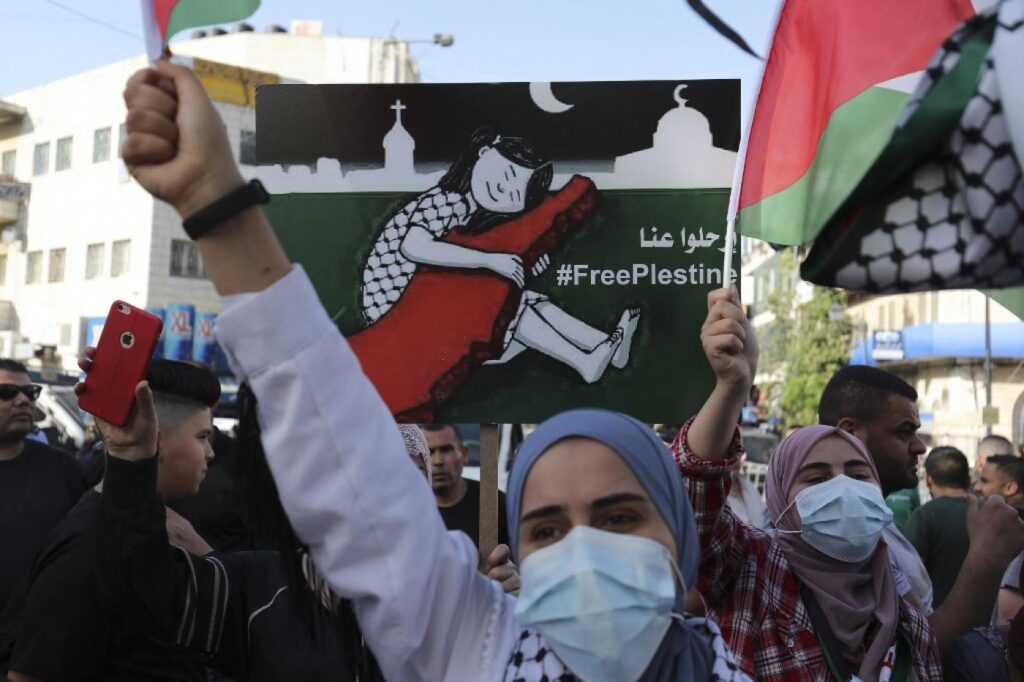 Early last month, Israeli forces stationed on a major highway to Jerusalem halted several large buses carrying Palestinians from the 1948-occupied territories (those forced to carry Israeli passports). The passengers were heading to pray at al-Aqsa Mosque in the Old City of Jerusalem for Laylat al-Qadr, the holiest night of Ramadan.

Israeli police attempted to block the buses, but despite having been fasting and stopped on a highway some 16km from the Old City, passengers began making their way to Jerusalem on foot. Word quickly spread, and Palestinians from Jerusalem hopped into their cars to escort them to the city.

In a series of ongoing initiatives, Palestinian activists are working to defy and break Israel’s colonial geographic divisions and oppressive policies

After several hours of a major artery being blocked, including a Palestinian protest that broke out, Israeli forces caved in and allowed the buses to pass, spurring a moment of victory and celebration on the streets. It was an entirely spontaneous act of civil disobedience, and a historic moment of Palestinian collective organising.

After the violent Israeli crackdown on protests that took place inside al-Aqsa Mosque complex the previous night – of a scale not witnessed in years – Israel was keen to crush any attempts of a further show of Palestinian unity in occupied Jerusalem.

Israel was shaken, not only from the size of the unfolding protests in the Jerusalem neighbourhood of Sheikh Jarrah, against the forced displacement of several Palestinian families from their homes, but also from the popular response in ’48 towns, where residents held their own protests.

Despite layers of fragmentation policies and different oppressive realities in which Palestinians are forced to live, the bubbling anger on a national level left Israel scrambling to restrict Palestinian mobilisation by blocking buses on a highway, to its own detriment.

As creative mobilising initiatives emerge in Palestine alongside international attention – particularly on social media – Israel’s violent reactions and fear of the masses comes to the fore. Just this past weekend, Israeli forces violently suppressed a 3.5km Palestinian “marathon” from Sheikh Jarrah to Silwan in Jerusalem, in which thousands took part to protest against the ongoing ethnic cleansing in those neighbourhoods. Border police not only launched tear gas and stun grenades from close distances at the runners, they also physically beat them, injuring 23 people.

As the Sheikh Jarrah protests erupted, many asked: Why can’t Palestinians from Ramallah and the rest of the occupied West Bank attend these protests? Some of the most oppressive laws and policies that the Israeli colonial regime enforces on Palestinians today were created to prevent just that: the ability of the Palestinian masses to come together.

One Palestinian journalist from the occupied West Bank posted this thought on Twitter: “What if all the Palestinians in the West Bank entered and protested in Sheikh Jarrah? Can the [Israeli] occupation arrest thousands? Our numbers will be larger than theirs.”

Israel’s strategy is one we know all too well: divide and conquer. Physical and forced separation of Palestinians is at the core of its survival as a colonial state, and has been since its establishment.

Two million Palestinians – 70 percent of whom are refugees from the 1948 territories – are caged in the open-air prison of the Gaza Strip, under a 14-year Israeli blockade. They make up about a third of the Palestinian population remaining in their homeland.

The approximately three million Palestinians in the occupied West Bank are also confined, not permitted to enter the rest of historic Palestine except with an Israeli army permit that is not only difficult to obtain, but can be time-limited for as little as a few hours. The mere thought of having to ask your occupier for a permit to enter your own homeland – to see the sea – discourages many from applying.

Between the occupied West Bank and ’48 areas, and in the West Bank itself, a myriad of Israeli army checkpoints and roadblocks have sliced up land and divided Palestinians from one another, confining the space in which they can exist. Settlements, as well, form a sea around Palestinian villages, eating up their land, and armed settlers regularly carry out attacks against Palestinians.

Israel dictates where each Palestinian can live, who they can marry, and where and how they can build a future. Palestinians carry different coloured ID cards, passports and documents – including many different versions even within the same family – that dictate almost every aspect of their lives.

In parallel, Israel and its institutions have worked hard over the years to redefine Palestinians to fit its oppressive fragmentation attempts, such as by calling Palestinians in the 1948 territories “Arab Israelis”. As though living under the same regime that forced out their families wasn’t bad enough, they had to be called by its name, too. Israel also paints Gaza as “Hamas”.

Splitting the Palestinian people has always been an integral part of the Zionist project’s ability to realise its political goals of establishing a supremacist, settler-colonial state in Palestine – and, more importantly, continuing to maintain it.

The formation of this state was only feasible through the attempted uprooting of the Palestinian people by Zionist militias between 1947 and 1949, when they forcibly expelled three quarters of a million Palestinians from their homeland.

Israel continues to block their return and that of their descendants, who number more than five million today and live in refugee camps in neighbouring Arab countries, as it fears that having a greater number of Palestinians than Jews would lead to the “demise of the Jewish state”. Israel also blocks the return of those who were internally displaced and still live in refugee camps across the occupied West Bank and Gaza.

The events of the Nakba were followed immediately by policies and laws that entrenched the fragmentation that continues to this day. Under a colonial establishment that uses demographic engineering, military might and ethnic cleansing to maintain its power over a nation that continues to resist and to live in the same space – and in surrounding countries – fragmentation is one of the underlying tools enabling the Israeli state to maintain its longevity.

While protests over al-Aqsa and Israel’s bombardment of Gaza might have ended, the collective grassroots organisation and mobilisation taking place on a nationwide level are unprecedented, according to activists.

The Zionist project was mistaken to believe that it could suppress, fragment and mould a single nation into thinking it wasn’t one

On 18 May, Palestinians across the country staged a historic nationwide general strike. And when the march from Sheikh Jarrah to Silwan was announced, groups from Nazareth and Haifa organised buses to escort Palestinians to attend.

Palestinians across the country have also been participating in an “economic week” between 6-12 June, focused on encouraging Palestinians, including in the diaspora, to boycott Israeli products and to spend money on Palestinian produce, small businesses, stores and funding campaigns, under the slogans “We Buy Palestinian” and “Jerusalem, West Bank, ’48 and Gaza – a single economic power”.

Stores, restaurants and businesses taking part have introduced discounts for customers, while buses were departing from ’48 areas to Jerusalem throughout the week to shop at Palestinian stores, including in the Old City.

Meanwhile, volunteer legal committees have been set up in ’48 and in Jerusalem to defend detainees in the ongoing Israeli campaign of mass arrests across Palestine. And as demonstrations continue to be organised, many are using an Arabic hashtag translating to “be many” in their calls to protest.

The developments over the past two months highlight that despite the geographic, social and political divisions it has worked so hard to entrench, the Zionist project was mistaken to believe that it could suppress, fragment and mould a single nation into thinking it wasn’t one.

Disclaimer: Israel's biggest fear is the Palestinian masses gathering - Views expressed by writers in this section are their own and do not necessarily reflect Latheefarook.com point-of-view