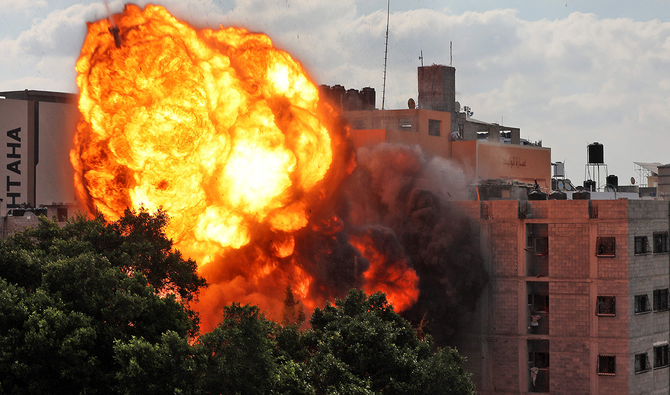 AMMAN: The fight over the Jerusalem neighborhood of Sheikh Jarrah, clashes in and around Al-Aqsa Mosque between Muslim worshippers and Israeli police,  and the exchange of rockets, shelling and airstrikes between Hamas and the Israel Defense Force could turn into a civil war between Israeli Jews and Palestinian citizens of Israel, experts fear.

Palestinians, living in mixed Arab and Jewish towns like Lydda, Ramleh, Bat Yam, Haifa and Yaffo, have come under repeated attack in the past few days, with much of it motivated by racism.

Right-wing Jewish mobs yelling “death to Arabs” have beaten up individuals, vandalized homes and targeted shops belonging to Arabs — who make up 20 percent of Israel’s citizenry.

Wadie Abu Nassar, an honorary Spanish consul based in Haifa and a political analyst, said his daughters, as well as their cars and home in Haifa, were targeted by an anti-Arab Jewish mob.

Speaking to a local radio station, Abu Nassar said while his daughters were shocked at what happened, the deeper wounds are not physical. “While my daughters suffered some physical injuries, the much deeper wounds are the emotional ones caused by the revelation of this racism, that had been hidden for years,” he said.

Abu Nassar, an advisor to Catholic bishops in Israel, Palestine and Jordan, added that what happened has been truly revealing. “I am a firm believer in nonviolence, but it is clear that the Israeli public is now seeing the depth of racism, and that has happened only due to the fact that they were forced to deal with something that Palestinians have been dealing with for years.”

Prof. Sari Nusseibeh, former president of Al-Quds University, told Arab News that he sees two faces to the sudden Palestinian public revolt in Israel; one expressing a dormant, if not often visible, disaffection with the state of Israel, and the other an identification with the Palestinian national struggle and religious affiliations.

“The breakdown of the ‘civil state’ into mutual distrust, lynching, and disorder should be a clear sign for Israel that a discriminatory system based on a supremacist ideology will not hold forever and must be rectified if a day of reckoning is to be avoided,” he said.

“In the meantime, the rockets from Gaza, however inferior to Israel’s nuclear and military might, should forewarn Israel that the Palestinian national struggle will not go away, and will continue to pose a mortal threat to Israeli lives, and a political challenge to Israel’s image in the world,” he added. “Israel is obligated to look into the mirror and come to terms with the fact that until justice is realized it will never achieve peace.”

Dan Shanit, a retired Israeli physician and former head of the medical program at the Peres Center for Peace, told Arab News that he is disappointed with corrupt politicians. “The responsibility lies with the corrupt wish to hang on to power at all costs while others are exploiting religious and nationalistic sentiments in order to gain the support of the street following failed elections. The mob seems to have an upper hand while civilian blood is being spilled,” he said.

The Haifa-based Mossawa organization called on the international community to work toward achieving an immediate ceasefire and stop strikes against Gaza.

The statement added that settlers had organized themselves throughout Arab localities and mixed cities with the intent of inciting clashes with Arab protesters.

“Screenshots of right-wing settler group conversations via (the) Telegram application were leaked showing the intent to kill and physically harm Arabs, as well as video evidence of settlers using live ammunition to shoot at Palestinian protesters. Many clashes were provoked and police arrests were discriminatory toward one side,” it said.

Botrus Mansour, a Nazareth-based lawyer, told Arab News that while the last few days have been very painful to see, it could have a positive result in the long term.

“For years we have been talking about the problems in the Arab community — the increase in violence — and we have also been expressing our worries that the anti-Arab racism condoned by senior officials will one day show its result on the ground,” he said. “What we are seeing now is the proof of the argument that for too long the successive Israeli governments have ignored both internal Arab violence and the incitement against Arabs by right-wing extremists. Now the country has seen the results of that wrong policy.”

Jamal Dajani, a Jerusalemite and former head of communications to the Palestinian prime minister, told Arab News that the situation in Israel is very volatile and could easily escalate quickly “because it is encouraged by Kahanists (an extremist Jewish faction) in the Israeli Knesset and (the) government.

“What we saw in the past 24 hours, with Jewish mobs lynching 48 Palestinians and attacking their businesses, is something to be very worried about, especially if the war on Gaza continues,” he added.

Former Palestinian Liberation Organization official Hanan Ashrawi, meanwhile, said the events of the past few days have had a galvanizing effect, uniting Palestinians in the West Bank including Jerusalem, in Gaza and across the diaspora.

Disclaimer: Jerusalem conflict stokes fears of civil war in Israel by DAOUD KUTTAB - Views expressed by writers in this section are their own and do not necessarily reflect Latheefarook.com point-of-view