Speaking to MEE, Meshaal calls on all Palestinians to join a ‘comprehensive uprising’ against Israeli occupation 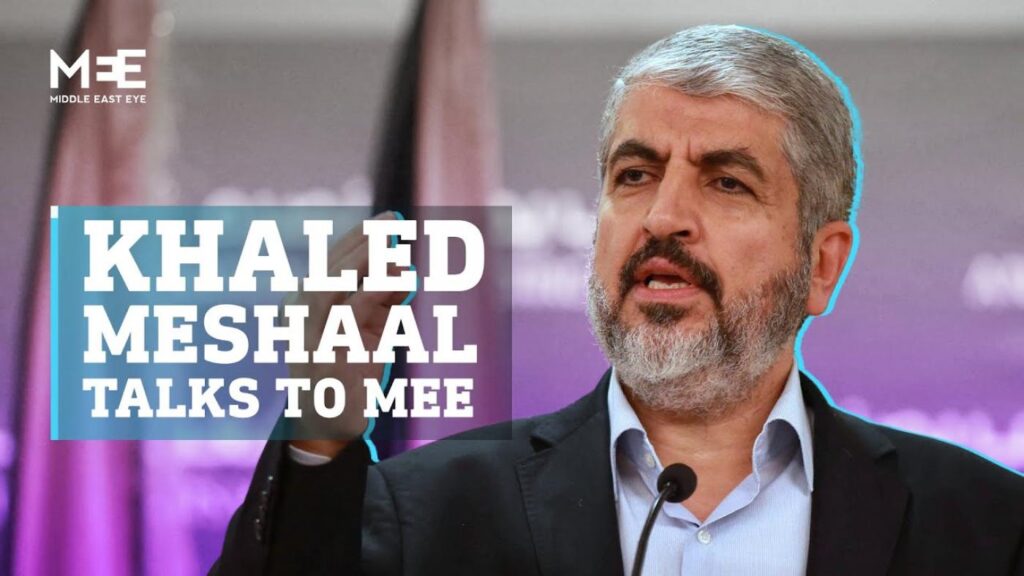 Hamas now leads the Palestinian people because the primary role of leadership under occupation is to lead Palestinians towards freedom and liberation, Khaled Meshaal, who heads the organisation in the diaspora, told Middle East Eye.

In the militant group’s first interview in English since last Friday’s ceasefire with Israel, Meshaal called for a comprehensive uprising in “all locations” of historic Palestinian territory – Jerusalem and the Old City, the West Bank, and inside Israel itself.

The senior leader, who headed Hamas’s political bureau until 2017, also said the movement was prepared to talk to the US.

He said it was strange that President Joe Biden’s administration continues to talk to the Taliban, who have been actively fighting US troops in Afghanistan for almost two decades, while refusing to talk to Hamas, which is not engaged in combat with the US but has been designated as a terrorist organisation by Washington since 1997.

In a message directed at Biden, Meshaal added: “We do not take you to be our enemies although we object to many of your biased policies in favour of Israel and against our Arab and Islamic interests. But we do not fight you. So we are ready to communicate with any party without conditions.”

Meshaal said that the Arab countries that had normalised relations with Israel had not only stabbed Palestinians in the back, but also damaged their own interests by risking inciting a popular revolt.

“What they hope to get from Israel is an illusion and imagination,” Meshaal warned. “If they are not ashamed, they have a very narrow space before them because public opinion will be against them.”

In Palestine, Hamas had noticed a surge in popular support as a result of its decision to launch missiles at Israel in response to Israeli attacks on al-Aqsa mosque and the residents of Sheikh Jarrah.

That support came in areas outside its traditional control and where its members have been subject to continual arrest, in the West Bank and among Palestinian citizens of Israel.

Asked whether he thought Mahmoud Abbas had any authority left as Palestinian President after the latest round of fighting, Meshaal replied: “We do not exclude anyone and we do not cancel the role of anyone.

“However, undoubtedly everyone has seen that Hamas’s credentials and its status in the Palestinian leadership has been bolstered because it has led the struggle in the recent rounds and especially in the current round.”

For the first time in many years, Hamas flags have been seen flying alongside Fatah ones in demonstrations and protests in Nablus, and on Friday an imam who refused to mention Gaza in his weekly sermon at al-Aqsa was forced out of the mosque by irate worshippers.

In Jerusalem and in Umm al Fahm in northern Israel, protesters chanted the name of Mohamed ad-Deif, the leader of Hamas’s military wing, the al-Qassam Brigades, whom Israel tried to kill during the recent conflict.

Meshaal said the primary function of leadership in these conditions was struggle and resistance, and leading Palestinians towards freedom and liberation.

Elections not the only option

Only weeks before the fighting broke out, Hamas had been prepared to contest elections alongside Fatah and other Palestinian factions before they were postponed by Abbas.

Meshaal said Hamas had confidence in itself and was still prepared to put itself forward at the ballot but elections were not the only option.

“Hamas is not afraid of proposing itself to its people via the ballot boxes. Perhaps others are afraid,” he said, in an apparent dig at Abbas.

But he went on: “Yet, once again, are elections the only option? Is it the only component in the system of reconciliation and putting the Palestinian house in order? No.”

Meshaal said that the Palestinians were one people with one cause and called for a “comprehensive uprising in all locations”.

“In Jerusalem, where danger is looming over al-Aqsa, over Sheikh Jarrah and the Old Town and the whole of Jerusalem; in the West Bank, where there is occupation, settlements, severing ties and land confiscation; and in the 1948, where there is racial discrimination, the attempts to expel and banish our people in the 1948 using the law; also the resistance in Gaza; and even in the diaspora. They are all share in the responsibility for liberation.”

Asked what would cause Hamas to fire rockets again, Meshaal said the ceasefire was not only contingent on an end to Israeli attacks on Gaza, but to the end of incursions by Israeli security forces into al-Aqsa, and an end to the displacement of Palestinian residents of Sheikh Jarrah neighbourhood and East Jerusalem.

“The battle was ignited for those reasons . Resistance rocket swill stop from Gaza according to that,” he said.

However he went on to say that every area under occupation could choose its own form of resistance.

“There is no one form that is good for everyone and at a single moment.”

Meshaal said the latest conflict had highlighted the role of Palestinians living within the borders of 1948 Palestine.

“They gave a message that we are a genuine part of this people and that [they] come to the aid of al-Aqsa, Sheikh Jarrah neighbourhood and Gaza just as does every other Palestinian coming to the aid of his other brother,” he said.

Israel was also paying a price for racist policies and violations of the rights of its Palestinian citizens which had exposed the “brittleness” of the state of Israel, he added.

“It’s become obvious to all Palestinian, Arab and Islamic masses, and to the free people of the world that Israel is counting its days and that this occupation, settlement, colonial entity has no future in the region.”

‘It’s become obvious to all Palestinian, Arab and Islamic masses, and to the free people of the world that Israel is counting its days and that this occupation, settlement, colonial entity has no future in the region’ – Khaled Meshaal

MEE asked Meshaal to explain how Hamas had gone from a position of contesting elections, even as hundreds of its members were being arrested in the West Bank, to firing missiles.

At the time there was a vigorous debate within Hamas about the wisdom of contesting elections in conditions in which it could not operate freely as a political party. The elections were eventually postponed, many believe cancelled, by Abbas who used Israel’s refusal to allow Jerusalemites to vote as the excuse.

Explaining the switch between the ballot box and missiles, Meshaal said the decision to cancel the elections had created “anger and frustration” and a sense of astonishment: “Why this step?”

Then came the violence against worshippers and protesters at al-Aqsa and the threatened displacement of residents from their home in Sheikh Jarrah.

He accused Israel of initiating the aggression. He said Hamas warned Israel, so that Israel was not surprised by rocket fire.

“When it stormed al-Aqsa mosque at the end of Ramadan, resistance was compelled to respond… and the battle started,” Meshaal said.

“There is no contradiction between engaging in the political battle through elections and partnership, and supporting the cause and mobilising for it at international forums and engaging in combat. Both battles are linked to each other,” he said.

Asked who took the decision to fire the missiles, Meshaal said the movement had a single leadership, but each part of it takes its own decisions.

“ When the al-Qassam leadership takes a decision in performing the battle, it decides in accordance with the strategy and the general movement’s decision. The same applies to those who work in the fields of mass mobilisation or political relations. These are detailed decisions in work avenues. They spring from the central decision made by the movement’s leadership.”

Meshaal had warm words for Egypt, even though President Abdel Fatteh el-Sisi mounted a military coup against the country’s elected Muslim Brotherhood-backed President Mohamed Morsi and massacred his supporters at Rabaa, as well as enforcing the siege of Gaza, by destroying Hamas’s tunnels and the Egyptian side of Rafah border crossing.

Meshaal said Egypt’s role in Palestinian affairs was fundamental, even though there had been disagreements.

“Mutual interests demand that both sides work together and may provide roles that both sides agree on and work jointly on, despite the differences, as you said, about the issue of the Brotherhood or others.”

“We in Hamas, though we are an essential part of the Brotherhood, are a resistance movement and we do not interfere in the affairs of others and we deal with the Islamic countries, and with others, on the basis of our cause and its interests without us interfering in their affairs or them interfering in ours.

“Therefore, we welcome the Egyptian role as we welcome the roles of all Arab and Islamic states or any country in the world so long as it is meant to serve our people and stop the aggression against it and serve its steadfastness.”

The veteran Hamas leader said that Arab states bore a responsibility to come up with a new strategy to regain Palestine, Jerusalem and al-Aqsa, and to end the occupation.

“Everyone is now certain that Israel is true enemy of the region and that Israel is a brittle entity and that we can defeat it instead of complaining about its policies.”

He said Egypt was displeased with Israel’s policies towards the Renaissance Dam in Ethiopia which Cairo sees as a threat to national security. Egypt is certainly unhappy about reports of alleged Israeli plans to dig an alternative shipping channel to the Suez Canal.

“Therefore, instead of feeling helpless regarding the Israeli violations and plans, this is an opportunity… the resistance in Palestine and this great uprising of our people is telling the Arabs, ‘Folks, we are a single Ummah and we have the same interests, so let us build upon this achievement.’

“Let’s fight a single battle, not just to rescue and claim back Palestine but also to protect the entire Ummah.”

Disclaimer: Khaled Meshaal interview: Senior official says Hamas now leads Palestinian struggle By David Hearst - Views expressed by writers in this section are their own and do not necessarily reflect Latheefarook.com point-of-view