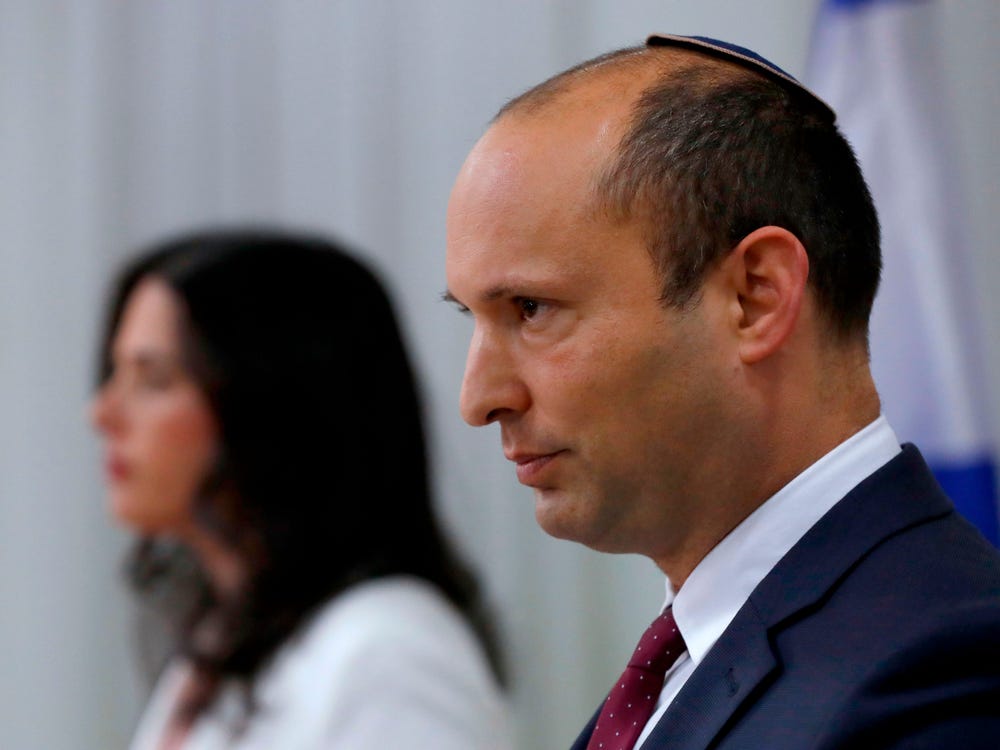 Israel’s longest-serving prime minister, Benjamin Netanyahu, could soon be out of office after an unlikely coalition of eight opposition parties successfully reached a deal to form a new government.

If the coalition is ratified in Israel’s Knesset on Sunday afternoon, Netanyahu will be replaced as prime minister by his former Chief of Staff and the head of the right-wing Yamina party— Naftali Bennett.

Bennett, an ultra-nationalist multimillionaire, would serve as prime minister for two years before handing over to the Yesh Atid chairman Yair Lapid.

With Bennett poised to take the reigns imminently, many are wondering who the prime minister-in-waiting actually is.

Both of his parents are graduates of the University of California, Berkeley

Bennett was born in the port city Haifa in 1972. He descends from Holocaust survivors on his mother’s side and has Polish, German, and Dutch roots, according to Haaretz.

His parents, Myrna and Jim Bennett, are American but now live in Haifa. They visited Israel for a vacation after the Six-Day War in 1967 and ended up settling, according to The Jewish News of Northern California. Bennett’s father is a fifth-generation San Franciscan, the paper reported.

His parents are graduates of the University of California, Berkeley, and were “left-wingers” until they moved to Israel and embraced nationalism, his mother told Haaretz.

“In the US, we were against the Vietnam War. We went to Berkeley. We were automatically like left-wingers. When we came to Israel, I felt I loved the place I was living in,”  she said in a 2013 interview.

Bennett and his two brothers, Asher and Daniel, were raised in a modern Orthodox Jewish home in Haifa. A childhood friend told Haaretz that Bennett grew up in an atmosphere that was “very Zionist, right-wing.”

He attended a religious, co-educational school. He didn’t excel academically, according to a former teacher. 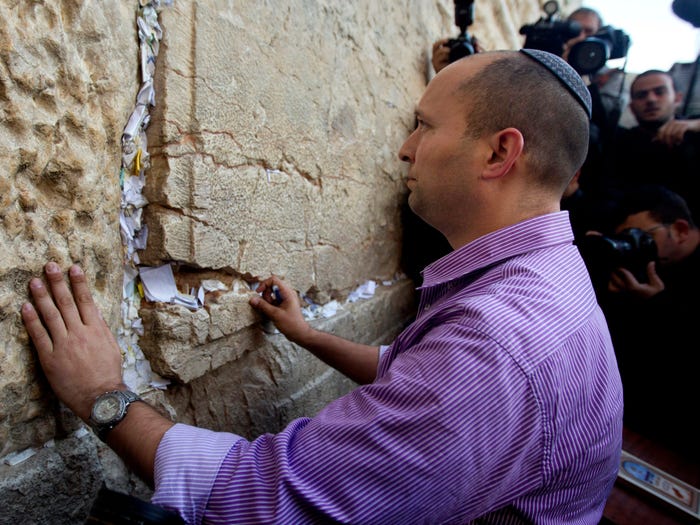 He was involved in the ‘Qana Massacre’ that killed 106 civilians

Bennett began his compulsory military service with the Israel Defense Forces (IDF) in 1990. He served in the Sayeret Matkal — the special forces unit tasked with counter-terrorism missions and hostage rescue outside of Israel’s borders — and as a company commander of the elite Maglan unit, The Jerusalem Post reported. Maglan is a secretive reconnaissance unit that specializes in using advanced technology and weaponry behind enemy lines, according to Ynet.

His role in one military operation, known as the Operation Grapes of Wrath or the April Aggression, is particularly controversial.

In April 1996, Bennett was the commander of a Maglan unit of 67 soldiers. While in Qana, a village in Southern Lebanon, his unit came under mortar fire from Hezbollah fighters.

The attackers reportedly fled into a nearby United Nations compound sheltering hundreds of Lebanese civilians. Bennett radioed for support against the Hezbollah mortar team, according to The Times of Israel, and the IDF artillery fired 36 high explosive shells in retaliation. But 13 shells struck the UN compound, killing 106 civilians in what is now called the “Qana Massacre.” 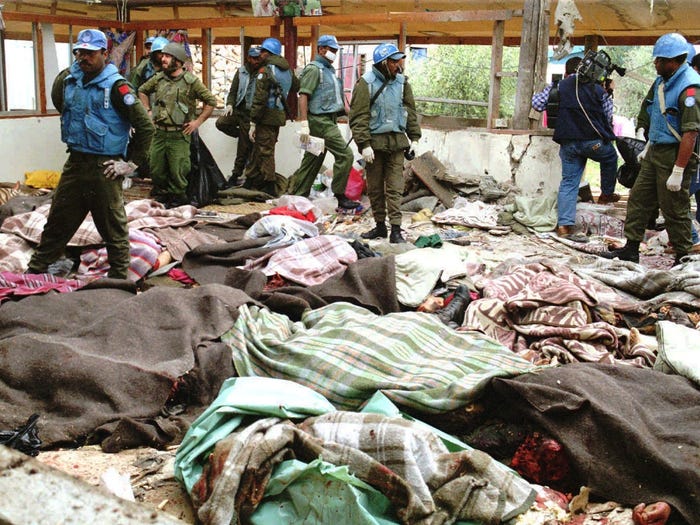 In the lead-up to the 2015 Israeli elections, Israeli journalist Ravid Drucker cited an anonymous “senior army figure” report that said Bennett’s radio call for support was “hysterical” and showed poor judgment, The Times of Israel reported.

Bennett called Drucker’s charges a “vanity of vanities, nonsense, a pile of bulls–t.” Other officers familiar with the incident dismissed the charges and said that Bennett displayed “level-headedness,” according to The Jerusalem Post.

Bennett would go on to boast: “I already killed lots of Arabs in my life, and there is absolutely no problem with that,” he said, according to The Washington Post. He claims to have been misquoted, Israeli media reported.

Bennett is still a reservist, ranked as a major, and was called up during the 2006 Lebanon War, The Australian said.

After his military service, Bennett studied for a law degree at the Hebrew University of Jerusalem.

In 1999, he married his wife Gilat — a professional pastry chef from a secular Israeli family. The couple has four children.

In the early 2000s, he moved to New York City to launch his career as a software entrepreneur and lived in the affluent Upper East Side of Manhattan, The New Yorker reported. He co-founded an anti-fraud software company, Cyota, which he eventually sold in 2005 to RSA Security for $145 million.

He returned to Israel as a reservist in 2006 and then embarked on a political career. He served as Netanyahu’s Chief of Staff from 2006 to 2008. He also helped Netanyahu win his primary campaign to lead the Likud party in 2007.

In 2009, he became the CEO of Soluto — a now-defunct software company. He eventually stood down from the role to become director-general of the Yesha Council — a pro-settlement group of organizations.

In 2010, he co-founded a right-wing political organization, My Israel, with Zionist firebrand Ayelet Shaked. The group, along with the Yesha Council, worked to propagate right-wing Zionism online. They launched workshops to teach participants how to rewrite Wikipedia articles to make them more pro-Israel, The Guardian reported in 2010. 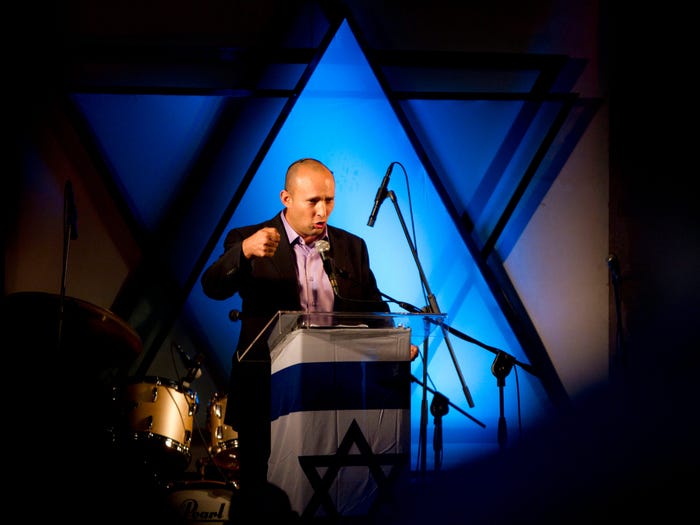 In 2013, he became the party leader with 67 percent of the vote and later won 12 seats in Israel’s Knesset. He renounced his American citizenship to join the Knesset, The Jerusalem Post reported.

He was appointed Minister of the Economy, Minister of Religious Services, and, later, the Minister of Jerusalem and Diaspora Affairs, serving under prime minister Netanyahu.

While acting as a minister in these roles, Bennett sold Soluto for $130 million in 2013, according to Haaretz. He pocketed millions from the sale, the paper said.

In 2015, he was re-elected and became Minister of Education. In this role, he banned schools from inviting organizations that condemned Israel’s actions in the occupied West Bank, Ynet reported.

Tensions between Bennett and Netanyahu

Bennett had previously viewed Netanyahu as his mentor. He looked up to him so much that he even named his eldest son, Yoni, after Netanyahu’s brother, who was killed in 1976, Reuters reported.

Their working relationship soured after a mysterious falling out in 2008 at the end of Bennett’s tenure as his chief of staff, according to The Washington Post. The argument was, according to Israeli media reports, related to Netanyahu’s wife, Sara.

A year later, they clashed again after Bennett criticized Netanyahu for slowing down settlement construction, the Post added.

In 2018, tensions between Netanyahu and Bennett escalated. Bennett wanted to be Defense Minister but was thwarted by Netanyahu, who then took the job for himself, Reuters reported.

Bennett announced that his party, Jewish Home, would leave Netanyahu’s government. He later reneged and remained in the coalition, The Times of Israel reported. 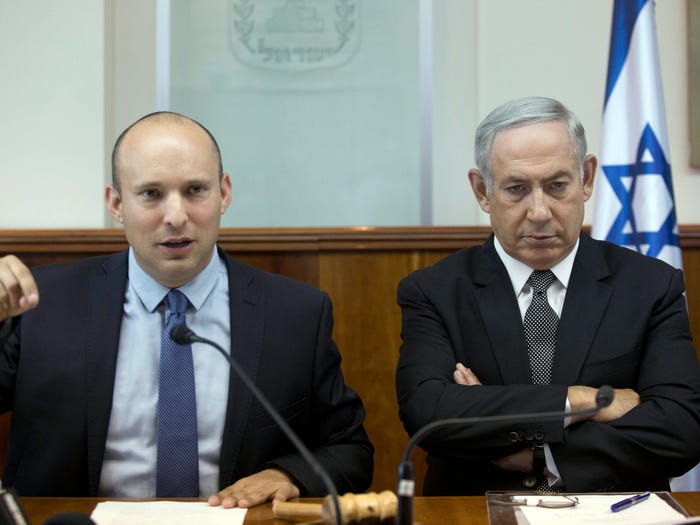 He then shocked the nation by splitting from Jewish Home to form the anti-Palestinian New Right party in 2018. The party failed to win any seats, and the New Right formed an electoral coalition with minor right-wing, religious parties to bolster their electoral chances. This became known as Yamina, which won seven seats in the March 2021 election under Bennett’s leadership.

Due to the contorted logistics of coalition-forming in the Israeli political system, Bennett, with only seven seats, became known as the “kingmaker’ during the latest negotiations to form a new government. He has, to the surprise of many, emerged as king.

As part of the political trading, Bennett had to walk back on previous comments made about United Arab List chairman Mansour Abbas — an Israeli-Arab politician who has joined the coalition.

Bennett had previously called Abbas a “supporter of terrorism,” but, now, the pair are strange political bedfellows. Last week, he called Abbas a “brave leader” and a “decent man” and said that the partnership would “turn over a new leaf in the relationship between the state and Arab Israelis,” Haaretz reported.

There are few signs that Netanyahu’s ousting will bring a substantive change to the Israeli-Palestinian relationship. Bennett shares a similarly hardline, right-wing approach to security issues.

Bennett favors the unilateral annexation of the occupied West Bank. “We have to mark the dream, and the dream is that Judea and Samaria will be part of the sovereign State of Israel. We have to act today, and we must give our lives,” he said in 2017.

He also opposes the creation of a Palestinian state. “I will do everything in my power to make sure they never get a state,” he told The New Yorker in 2013.

But Bennett has said that, as part of his coalition agreement, he will not agree to the annexation of any West Bank territory or the building of new settlements, The Times of Israel reported.

Bennett would be Israel’s first religiously observant, Orthodox Jewish prime minister and the first to always wear a kippah (skullcap) — a marker of religious observance.

Furious ultra-Orthodox politicians have questioned whether his religiosity is merely for show. The fierce criticism he has received from Haredi lawmakers is, in part, down to Ulta-Orthodox parties being excluded from the coalition

But Bennett has dismissed the claims. “The ultra-Orthodox Knesset members will not teach us what Judaism is and certainly not what Zionism is,” he said.

But even within the coalition, questions remain as to how Bennett will find common ground between his ultra-nationalist, conservative views, and Lapid’s center-left, pragmatic approach. When asked about this, his response is simple and ambiguous: “We’ll manage.”

Bennett is anticipating ferocious criticism and cries of betrayal for joining the coalition. He told Channel 12 News: “I told my kids that their father was going to be the most hated person in the country.”

His four children are unlikely to move into the official Prime Minister’s residence in Jerusalem any time soon. Bennett has said that, given that his kids are attending four different schools in Ra’anana, he does not plan to move imminently, The Times of Israel reported. He will primarily use the official residence for meetings, the paper said.

That’s just as well because Netanyahu plans on staying put in the official residence for several weeks, according to Channel 12 News. This is partly due to logistics, but also because the current prime minister is yet to concede defeat.

Even if Bennett is sworn in on Sunday, it may still be a while yet until Netanyahu officially hands over the keys, and his grasp over the Israeli political establishment, to his longtime mentee.

Disclaimer: Naftali Bennett: The tech millionaire son of Berkeley 'left-wingers' who is poised to take over from Israel's Benjamin Netanyahu - Views expressed by writers in this section are their own and do not necessarily reflect Latheefarook.com point-of-view