Palestinians from cities across the occupied West Bank came to Hebron for funeral of Palestinian Authority critic, killed during detention on Thursday 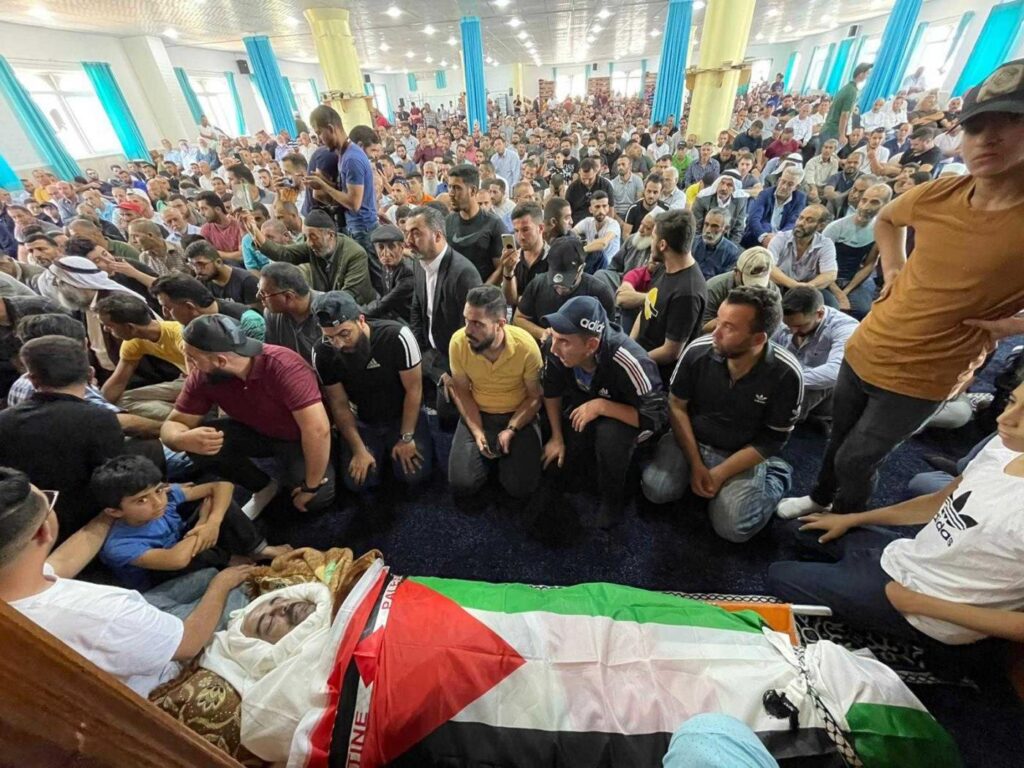 Tens of thousands of Palestinians gathered in Hebron in the occupied West Bank on Friday for the funeral of activist Nizar Banat, who died in the custody of the Palestinian Authority on Thursday.

Mourners flocked to Hebron’s Wasaya Al-Rasoul Mosque, chanting “leave, leave Abbas” and “the people want the overthrow of the regime”, as anger continues to mount against the PA and President Mahmoud Abbas, of whom Banat was a fierce critic.

The funeral began with the transfer of Banat’s body to his home and his family’s last farewell, accompanied by his daughter, who was preparing to start her high school exams.

“I wanted you to see me wear the graduation gown… Who will feed me? Who will teach me?” she said during his farewell.

Banat was arrested by at least 25 officers, who raided his home in the town of Dura in the southern West Bank governorate of Hebron at 3.30am on Thursday. He was declared dead shortly afterwards.

Preliminary autopsy results showed that Banat was beaten severely, with several bruises and fractures visible all over his body, said Samir Zaarour, a doctor who oversaw the autopsy, on Thursday.

The Ramallah-based Independent Commission for Human Rights revealed the autopsy results at a news conference in Ramallah on Thursday.

Zaarour said Banat had injuries to the head, neck and shoulders, as well as broken ribs and internal bleeding in the lungs – signs of an unnatural death. He stressed that the victim did not suffer from any serious medical condition that would otherwise lead to his death.

Full autopsy and toxicology reports, expected to be available within 10 days, will determine the cause of death.

On Thursday, thousands of protesters in the West Bank city of Ramallah faced a police crackdown as they took to the streets over Banat’s death, chanting: “In soul, in blood, we defend you Nizar.” PA forces hit demonstrators with batons and fired tear gas and stun grenades.

End of the Palestinian Authority?

The death of Banat has again raised questions about the legitimacy of the PA as a governing body.

Shawan Jabarin, director general of the Palestinian Al-Haq foundation for human rights, told Middle East Eye that Banat’s position as a political activist, and one involved in party politics at that, makes his apparent killing a more serious incident – particularly in the wake of cancelled parliamentary elections in May.

“There is an entire population today excluded from participation in decision making… this is weakening the Palestinian people and their role, and this will not lead to liberation from the colonialists, nor will it lead to any freedom and independence,” Jabarin said.

‘I wanted you to see me wear the graduation gown… Who will feed me? Who will teach me? Don’t leave me, Dad’

– Nizar Banat’s daughter at his funeral

“The peaceful, democratic path is the only way to change… the continued exclusion of the people from the political process is a worrying matter, and it will lead to explosions, because people are fed up and no longer trust the system of power.”

Aziz Dweik, speaker of the Legislative Council – suspended since 2006 – said that Banat’s death was “a major crime against a political activist who did not raise a stone or raise a pistol against the authority”.

“The assassination of Nizar is a crime according to all the standards of the universe… this is a compound and double political crime based on an exclusionary approach and not an approach based on the participation of the people in the exercise of political life,” he told MEE.

Disclaimer: Nizar Banat funeral: Thousands of Palestinian mourners demand 'overthrow of regime' - Views expressed by writers in this section are their own and do not necessarily reflect Latheefarook.com point-of-view