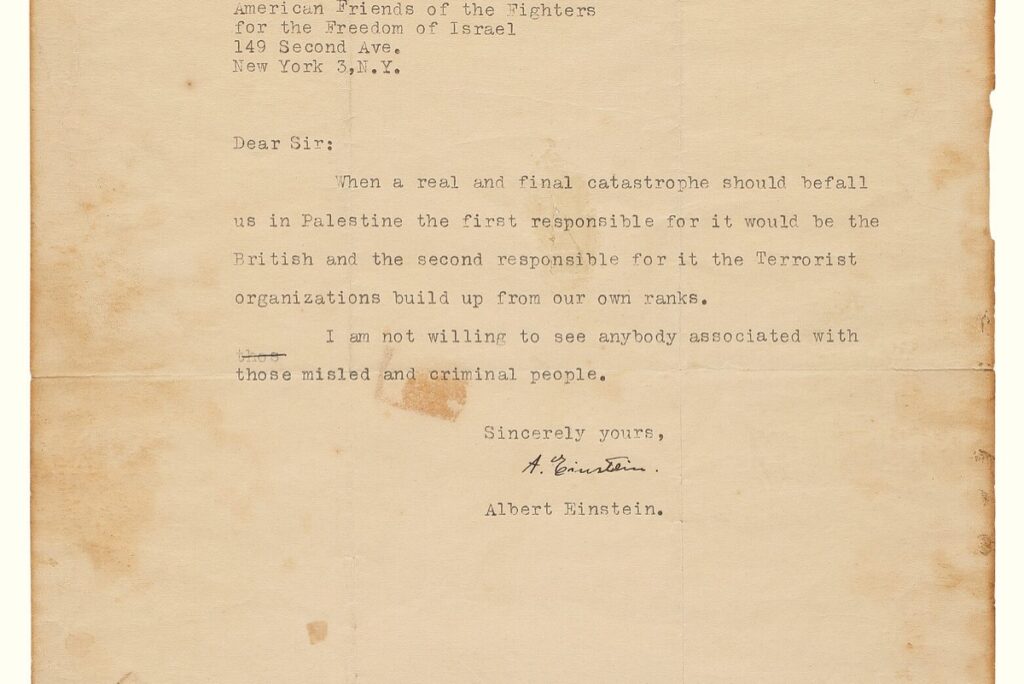 It doesn’t take a genius to see that the failing Zionist project called Israel is coming apart at the seams. It was a genius, though, who predicted the demise of the fledgling state when he was asked to help raise funds for its terrorist cells.

Ten years before the state declared its “independence” in 1948 on land stolen from the people of Palestine, Albert Einstein described the proposed creation of Israel as something which conflicted with “the essential nature of Judaism.” Having fled Hitler’s Germany and eventually becoming a US citizen, Einstein needed no lessons in what fascism looked like.

One of the greatest physicists in history, and supported by some other high profile Jewish intellectuals, Einstein spotted the flaws and fault lines in 1946 when he addressed the Anglo-American Committee of Inquiry on the Palestinian issue. He couldn’t understand why Israel was needed. “I believe it is bad,” he said.

Two years later, in 1948, he and a number of Jewish academics sent a letter to the New York Times to protest against a visit to America by Menachem Begin. In the well-documented letter, they denounced Begin’s Herut (Freedom) party, likening it to “a political party closely akin in its organisation, methods, political philosophy and social appeal to the Nazi and Fascist parties.”

Herut was a right-wing nationalist party which went on to become the Likud led by Benjamin Netanyahu. As the leader of the Zionist Irgun terrorist group, a breakaway from the larger Jewish paramilitary organisation, the Haganah, Begin was wanted for terrorist activities against the British Mandate authorities. Even when he became prime minister of Israel (1997-1983) he never dared to visit Britain, where he was still on the most wanted list.

It was the violence in the run up to the birth of Israel that particularly revulsed Einstein, and no doubt this was foremost in his mind when he turned down the offer to become Israel’s president. This offer was put to him in 1952 by the state’s founding Prime Minister, David Ben-Gurion. Polite as his rejection was, Einstein believed the role would conflict with his conscience as a pacifist, that and the fact that he would have to move to the Middle East from his home in Princeton, New Jersey where he had settled as a German refugee.

While researching Einstein’s views I came across another of his letters, less well known but probably far more revealing than any other he had penned on the subject of Palestine. As brief as it was — just 50 words — it included his warning about the “final catastrophe” facing Palestine in the hands of Zionist terror groups.

This particular letter was written less than 24 hours after news filtered through about the Deir Yassin massacre in West Jerusalem in April 1948. Around 120 terrorists from Begin’s Irgun and the Stern Gang (headed by another terrorist who went on to become prime minister of Israel, Yitzhak Shamir), entered the Palestinian village and slaughtered between 100 and 250 men, women and children. Some died from gunshots, others from hand grenades thrown into their homes. Others living in the peaceful village were killed after being taken on a grotesque parade through West Jerusalem. There were also reports of rape, torture and mutilation.

A month later the British ended their Mandate rule in Palestine and Israel came into being. The legitimacy claimed by its founders was the November 1947 UN Partition Resolution which proposed that Palestine be divided into two states, one Jewish and one Arab, with Jerusalem administered independently of either side. 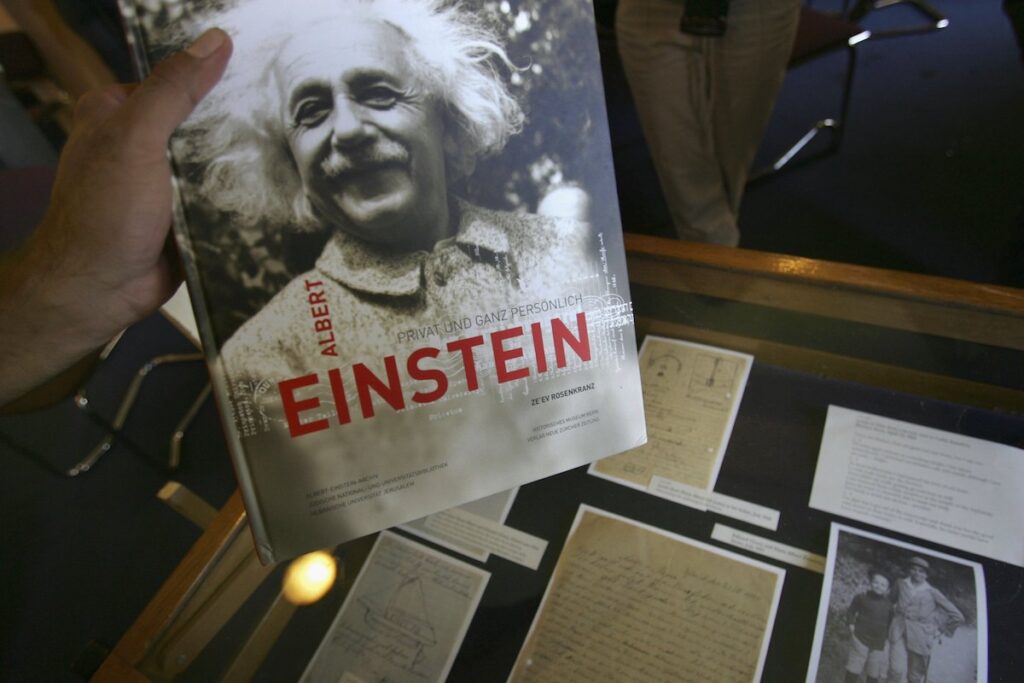 A journalist picks up a book on Albert Einstein during a press conference displaying newly-revealed letters and photos from the Albert Einstein archive, at the Hebrew University July 10, 2006 in Jerusalem. [David Silverman/Getty Images]

Einstein’s typed letter was addressed to Shepard Rifkin, the Executive Director of American Friends of the Fighters for the Freedom of Israel, based in New York. This group was originally launched to promote the anti-British ideas of the Stern Gang, and raise money in America to buy weapons to drive the British out of Palestine. Rifkin was appointed its executive director, although he later referred to himself as “the fall guy”. He had been told by Benjamin Gepner, a commander visiting the US, to approach Einstein for his help. Rifkin duly obliged, but in the wake of the Deir Yassin massacre he received a blistering response from the physicist, crafted in just 50 words:

When a real and final catastrophe should befall us in Palestine the first responsible for it would be the British and the second responsible for it the Terrorist organizations build [sic] up from our own ranks. I am not willing to see anybody associated with those misled and criminal people.

The letter was authenticated and sold at auction when it resurfaced and has since been described as one of the most damning anti-Zionist documents attributed to the genius.

It couldn’t be more different in tone and content from the letter he wrote to the Manchester Guardian in 1929, when he lauded the “young pioneers, men and women of magnificent intellectual and moral calibre, breaking stones and building roads under the blazing rays of the Palestinian sun” and “the flourishing agricultural settlements shooting up from the long-deserted soil… the development of water power… [and] industry… and, above all, the growth of an educational system… What observer… can fail to be seized by the magic of such amazing achievement and of such almost superhuman devotion?”

Einstein based his views on when he had visited Palestine for 12 days in 1923 giving lectures at the Hebrew University of Jerusalem. It turned out to be his one and only visit to the holy land.

As a lifelong pacifist he endeared himself to global peace movements when he wrote the “Manifesto to the Europeans” to ask for peace in Europe by means of the political union of all states across the continent. Little wonder that he never visited the state of Israel, formed as it was from the barrel of a gun, dynamite and the blood of the Palestinians.

There have been many “Deir Yassins” since Nobel Laureate Einstein condemned outright what he saw as Jewish terrorism. Today, with Gaza still smouldering from Benjamin Netanyahu’s latest brutal military offensive against the largely unarmed civilian population, the future of the Zionist state has never looked more precarious.

We are told that all political careers end in failure, and Netanyahu’s is just one example. We are also told that societal collapse is inevitable with the continual downfall of governments and the increase of violence often brought about by war and catastrophes.

Israel has held four General Elections in just over two years, which have been unable to produce a stable government. Netanyahu’s way to maintain his grip on power is to demonstrate that he is the strongman that the country needs to “defend” itself from Palestinian “terrorists”.

Moreover, it is under his watch that the Jewish Nation State Law was passed, legislation which contradicts the claim that Israel is a liberal democracy.

No wonder, then, that increasing numbers of Jews around the world — in whose name Israel claims to exist and act — are, as Einstein was, revulsed by the “Nazi and Fascist” political philosophy of Herut which seems to have been reincarnated under Likud and parties which are even further to the right of the political spectrum. Indeed, decent people of all faiths and none are appalled that right-wing extremism appears to be on the verge of engulfing mainstream Israel society as a whole.

The most famous Jewish scientist in history knew from its bloody conception that an Israel created and run by right-wing, gun-wielding zealots was not viable. It shouldn’t have taken a genius to tell us that, but it did.

Disclaimer: The 'final' downfall of Israel was predicted by Einstein By Yvonne Ridley - Views expressed by writers in this section are their own and do not necessarily reflect Latheefarook.com point-of-view