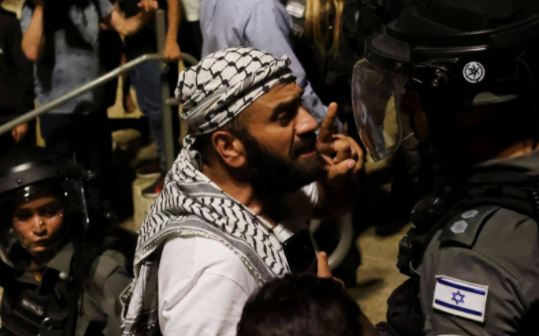 On Monday night, militants in the Gaza Strip and the Israeli military exchanged rocket fire and airstrikes amid a deadly escalation of violence. Hamas and Islamic Jihad, armed groups based in blockaded Gaza, launched a barrage of rockets that landed near Jerusalem and in parts of southern Israel, injuring at least one person. Israeli airstrikes in retaliation killed at least 20 people in Gaza, according to Gaza’s Health Ministry, including nine children.

Israeli Prime Minister Benjamin Netanyahu said the “terrorist groups” in Gaza had “crossed a red line” with their rocket attacks. But the latest explosion of hostilities has a long tail, following numerous aggressive actions by both Israeli security forces and far-right Jewish supremacist groups in Jerusalem. Two weeks ago, bands of Jewish extremists, including some settlers from the West Bank, marched through Palestinian-populated areas of the holy city, chanting “Death to Arabs,” attacking bystanders and damaging Palestinian property and homes. Israeli attempts to evict a number of Palestinian families in the East Jerusalem neighborhood of Sheikh Jarrah — a microcosm of what Palestinians view as part of a long history of dispossession and erasure at the hands of the Israeli state — had stirred Palestinian solidarity protests in various parts of the occupied territories and Israel proper.

It also raised tensions ahead of the commemoration of Jerusalem Day on Monday, an official Israeli holiday celebrating the capture of the city during the 1967 Arab-Israeli War. A planned annual march by far-right ultranationalist Israelis was called off after authorities rerouted its path at the last minute. Large numbers still made their way to the Western Wall and sang an extremist vengeance song against Palestinians.

“The Hamas rocket attacks, which included the first strikes against Jerusalem in several years, came after running clashes among Israeli police, Palestinian protesters and far-right Jewish Israelis around the Old City,” my colleagues reported. “Among the hundreds injured were seven who were hospitalized in serious condition, according to the Palestinian Red Crescent. Video footage circulated on social media of Israeli police officers brutally beating a detained Palestinian man.”

In a State Department statement, the United States appealed for “calm,” urging “de-escalation on all sides,” while singling out Hamas for condemnation and defending Israel’s right to self-defense. This followed a previous statement after Israeli forces stormed the compound of the al-Aqsa Mosque, firing tear gas and stun grenades at hundreds gathered there both in protest and prayer, in which U.S. officials urged “both sides” to eschew unilateral actions. Palestinian protesters threw stones at police and some Jewish Israeli citizens, injuring a couple dozen Israelis. Meanwhile, the Palestinian Red Crescent said more than 600 Palestinians were injured in the Jerusalem altercations.

To pro-Palestinian activists, the Biden administration’s position reflects the broader legacy of U.S. policy in the region. A growing list of rights groups now see the status quo of Israeli military occupation over millions of Palestinians as tantamount to apartheid and see the United States as enabling a morally unacceptable reality.

“There is no both sides here,” Jinan Deena, national organizer for the Arab American Anti-Discrimination Committee, told the Middle East Eye. “Palestinians are under occupation, and the United States has systematically supported this — whether through funding Israel’s military with our tax dollars or narratives such as this where blame is placed on both sides.”

In an op-ed published last month, three former commanders of the Israel Defense Forces warned that Israelis and Palestinians were on “a collision course” — not just because of “militant Hamas policy,” but because of a confluence of other factors, including the “now galloping” de facto annexation of the West Bank and the increasing inefficacy and enfeeblement of the Palestinian Authority, which nominally governs over the occupied territories but is unpopular in the West Bank and toothless in Hamas-controlled Gaza.

“Active U.S. involvement is needed to arrest these trends and begin reversing the slide toward the tragedy of one state between the Mediterranean and the Jordan River — a recipe for endless conflict,” the retired major generals wrote.

The Biden administration has made little secret of its desire to avoid a deep entanglement in the Israeli-Palestinian conflict. But some analysts argue that the support of successive U.S. administrations for Israel — through billions of dollars in military aid, acquiescence to Israel’s steady expansion of settlements in the West Bank and the shielding of Israel from censure in international forums — brought the conflict to this point. “US is not a bystander in the conflict; it is part and parcel of the asymmetry of power that unfairly hurts one side in favor of the other, while making peace more remote,” tweeted Shibley Telhami of the Brookings Institution.

In the past two decades, Israeli politics drifted further and further right. Netanyahu harbors no substantive commitment to the “two-state solution” championed by both U.S. Democrats and Republicans, while some of his political allies and rivals unilaterally reject it.

“Washington remains firmly in denial about the growing trend of extremism in Israeli politics and society — a reality that has both enabled and fueled it,” wrote Khaled Elgindy, a senior fellow at the Middle East Institute.

“Even when they are not directly involved in policymaking, radical voices — whether in Israeli or U.S. politics — are still able to shape policy and policy discourse by shifting the political and diplomatic goal posts,” Elgindy added. “Issues that were a matter of bipartisan consensus during the Clinton and George W. Bush administrations, for instance — like ending Israel’s occupation and affirming the centrality of the 1967 lines as the basis for negotiations — are now seen by many as highly contentious or even beyond the pale.”

The tumult of recent days exposed an emerging, if lopsided, split over Israel policy in Washington. On Monday, numerous U.S. lawmakers from both parties issued tweets condemning Hamas’s rocket attacks. But in the days before, prominent politicians to President Biden’s left, including Sen. Elizabeth Warren (D-Mass.) and Sen. Bernie Sanders (I-Vt.), protested the looming evictions of Palestinians in East Jerusalem.

The plight of the residents of Sheikh Jarrah earned international attention in recent days and fears over mounting tensions compelled the Israeli Supreme Court to delay a hearing on Jewish settler claims to homes in the predominantly Palestinian neighborhood. Cellphone footage of a Palestinian woman confronting a Jewish settler outside her home went viral.

“If I don’t steal it, someone else is going to steal it,” the settler is heard telling the woman.

On Saturday, Palestinians will commemorate the Nakba, or “catastrophe,” of the forced, brutal expulsion of hundreds of thousands of Palestinians from their homes and villages in 1948 in what is now Israel. The prospect of these refugees having the “right to return” — as they have long sought — is even more distant than the idea of a viable, sovereign Palestinian state and is politically taboo not just in Israel, but in the United States.

But in an essay in the left-leaning Jewish Currents magazine, Jewish American commentator Peter Beinart argued against the silence around Palestinian “return” at a time when the focus is shifting from their fading hopes for statehood to the more fundamental question of Palestinian human rights under Israeli occupation.

“The consequences of these efforts to rationalize and bury the Nakba are not theoretical,” Beinart wrote. “They are playing themselves out right now on the streets of Sheikh Jarrah. The Israeli leaders who justify expelling Palestinians today in order to make Jerusalem a Jewish city are merely paraphrasing the Jewish organizations that have spent the last several decades justifying the expulsion of Palestinians in 1948 in order to create a Jewish state.”

Disclaimer: The U.S. calls for ‘calm’ between Israelis and Palestinians. But it’s part of the problem By Ishaan Tharoor - Views expressed by writers in this section are their own and do not necessarily reflect Latheefarook.com point-of-view