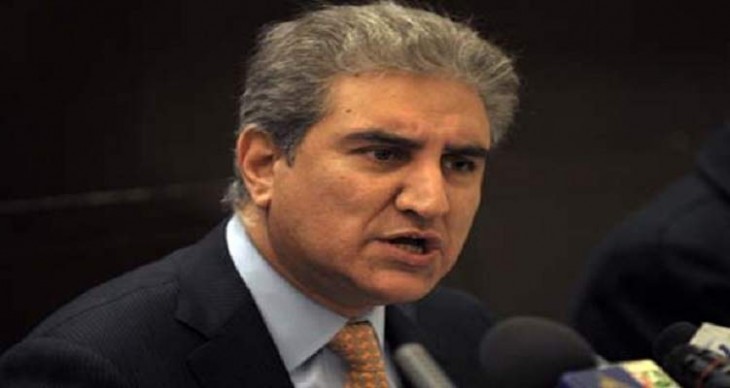 Foreign Minister Makhdoom Shah Mahmood Qureshi has said the world cannot shove the Palestine question under the carpet for long as it will continue resurfacing and simmering. In an exclusive interview with Al Jazeera TV, the foreign minister maintained “I think, you cannot shove the Palestinians question under the carpet for too long

ISLAMABAD, (UrduPoint / Pakistan Point News – 29th May, 2021 ) :Foreign Minister Makhdoom Shah Mahmood Qureshi has said the world cannot shove the Palestine question under the carpet for long as it will continue resurfacing and simmering.

In an exclusive interview with Al Jazeera tv, the foreign minister maintained “I think, you cannot shove the Palestinians question under the carpet for too long. It will continue resurfacing, the way you look the other way, it will continue simmering.”� �The foreign minister termed�the Israeli aggression against the innocent Palestinians as ‘barbaric, inhuman and uncalled for’ saying that the excessive use of force on 27th Ramadhan was unacceptable which triggered the crises.�� About the ceasefire, he said that he was very happy about the ceasefire and hoped it would hold.�During�2014, the ceasefire did not hold but he thought it would hold now, he added.� He said that international law and humanitarian laws were violated.

“The democracies in the West will not overlook the human issue,” he stressed.��� Foreign minister Qureshi said that the public pressure was building up worldwide against Israeli’s aggression and attacks.

They realized that they had been losing the media war. Nobody expected such a sharp reaction.��� To a query, he replied the governments responded later but the people reacted first which was a qualitative change.� Israel had never been expecting reaction in its mixed cities resided by Arabs and�Jews,�etc�who had been confronting each other in Israel which was an unprecedented development, he opined.�� About US reaction to the conflict, the foreign minister observed that they were slow, they should have acted and reacted sharply.

They could have saved lives.�� This was an experienced administration and one was expecting quick reaction from them. The slow reaction gave the impression that they were not prepared to deal with such a situation, he added.�� Qureshi further said that the Democratic party in US had always spoken about the human rights.�� The foreign minister said that Israeli prime minister Netanyahu was playing politics to regain the lost political ground and he had to flex the muscles, to show electorates he was a strong man and meant business.�� �Responding to another question, he said the US Secretary of State Antony�Blinken�had told him that extensive diplomatic efforts were underway over the conflict.�� “Now, it’s time for them to demonstrate and show to the world that US believes in human rights,” he observed.��� Qureshi further elaborated the US cannot remain indifferent, ‘they are a global power and they could not look the other way.

They have the responsibilities.� Many Americans believed in this�particular�way, as evident from different demonstrations held across US, he added.�� To a question regarding importance of US-Pakistan bilateral ties, he said that US could not afford to�ignore�Pakistan.� Look at the size and geo-strategic location Pakistan has been placed in, its place among the Ummah and the history of these ties, Pakistan and US had been allies.

They could not lose Pakistan, as it would be ‘a big political mistake, he said.� He said, the US realized the importance of Pakistan especially in the peace and reconciliation process of Afghanistan.

� “We cannot be held responsible if there were internal squabbling inside Afghanistan,” he said.�� The foreign minister said Pakistan would be the net beneficiary of peace in Afghanistan since it had been making sincere efforts for peace and stability there.

� About Pakistan‘s contributions in Afghanistan peace process, Qureshi said US special representative on Afghanistan Zalmay Khalilzad had publicly acknowledged the positive and constructive role Pakistan played in getting the Taliban and Afghans to negotiating table, facilitating the US and Taliban peace agreement in Doha and pushing the peace and Intra-Afghan dialogue forward.

� “We are still trying to break the stalemate existed there,” he added.� Pakistan always acted as a facilitator between Taliban and the Afghan government, he said.� Qureshi said Pakistan would never be irrelevant due to the regional picture and the new global changes.

Pakistan has always been relevant.� �To another question, he said Afghanistan was a sovereign country and they could have relations with India. Pakistan would have no objection over these ties and India‘s reconstruction efforts in the country.

But, they (India) have their limitations, with regard to the peace negotiations as they were not the immediate neighbors of Afghanistan and did not host millions of Afghan refugees, he said. Qureshi said all big countries have consensus over Afghanistan and convergence of opinion including China, Russia and the EU. About China‘s role in Afghanistan, he said China was its neighbor and their interests in peace and stability were inevitable.

They can help them in reconstruction, moreover, China is building an economic corridor and the Gwadar port would facilitate the landlocked Central Asian Republics who are part of Shanghai Cooperation Organization (SCO), so their interest is natural, he maintained. With regard to Pakistan‘s role in US-China ties, he said Pakistan had always been historically acting as a bridge-builder and always played a positive role. The US-China closeness would have been naturally beneficial, he said.

The foreign minister said Pakistan is a friend to both countries.  “Beijing stood with us through thick and thin and its support has been consistent,” he said, adding these bilateral ties were public centric.

The foreign minister categorically that Pakistan was not looking for post-cold war camp situation. They realized the significance of ties with the US and valued its strategic cooperation with China. “We want to be at peace with neighbors,” he said, adding it was India that shied away from bilateral ties, it ran away from composite and comprehensive dialogue, vitiated the atmosphere and violated bilateral agreements.

He said India‘s unilateral and illegal steps over Kashmir had boomeranged, as there were voices inside BJP government and throughout India that such approach would not work.  To a query, he said Pakistan was pursuing policies of geo-economy and promoting regional activity, besides, ensuring peace and stability in the region.”Our interests lie in peace with India and peace in Afghanistan,” he maintained. About Saudi Arabia and Iran ties and the role of Pakistan in removing their differences, Qureshi said if there was improvement in their ties, both would gain.

Disclaimer: World Can't Shove Palestine Question For Long: FM By Umer Jamshaid - Views expressed by writers in this section are their own and do not necessarily reflect Latheefarook.com point-of-view