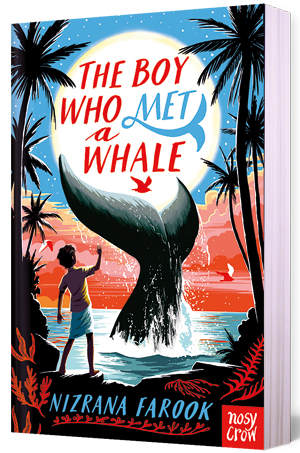 Nizrana Farook, whose debut children’s book ‘The Girl Who Stole an Elephant’ was a runaway hit, is now making waves of a far different kind with her second book ‘The Boy Who Met a Whale’. The starkly different settings for both ‘Elephant’ and ‘Whale’ -as Nizrana chooses to fondly refer to her books- were intentional. “As truly Sri Lankan stories, I wanted to showcase to my readership how varied our island’s (being so tiny) flora and fauna can be,” the author now based in the UK says.

For Nizrana, still reeling from the  success following the 2020 January release of her debut novel, it was a reception she could never have fathomed as a child with a ‘secret dream’ of being an author.

Having moved to the UK while expecting her second child, and a few years into making up stories with Sri Lankan characters and settings for her daughters as they grew up, Nizrana decided to gingerly dust off the self-doubt and look into writing with the intent to publish. Some invested research into the diverse books movement, the craft of professional writing, and a Master’s degree in Creative Writing for Children later, she found herself holding her first published work ‘The Girl Who Stole an Elephant’ in hand.

“I didn’t expect the reception I received to be honest. Many books come up generally speaking, they make a splash, and then others take their place. But after ‘The Girl Who Stole an Elephant’ was chosen as the Waterstones Book of the Month (in the UK), things really soared from there.”

“If you consider that approximately 10,000 children’s books are published in the UK alone in the year, to be among one of the 12 chosen came as a huge surprise.  All of a sudden, this barefooted Sri Lankan girl –from the cover- was in window displays and train stations across the UK. These are things that just completely blew my mind.”

‘The Girl Who Stole an Elephant’ has been nominated for the 2021 CILIP Carnegie Medal, Shortlisted for the UKLA Award, and Longlisted for the Blue Peter Best Story Award, and the inaugural Jhalak Prize Children’s and YA category. More excitingly, the book has been rubbing shoulders with the likes of J.K Rowling and David Walliams in bookseller charts, and even had the rights sold for the story to be adapted into an animated TV series.

With such elephantine shoes to fill, was there much pressure for the follow-up to match up to expectations?

“There was definitely a lot of pressure considering the unprecedented popularity that followed Elephant,” admits Nizrana. “Also it was new to me juggling book promotion alongside writing a second novel; all while keeping to deadline.”

“Furthermore, ‘The Boy Who Met a Whale’ was released while in lockdown, which of course offers up a fresh set of challenges as an author. Book readings and school visits have had to go virtual, and I still haven’t seen the books physically on the shelves.”

The publishing industry however, has managed to bounce back following the hiccup of the onset of the pandemic; now having figured how to force its way through the still crashing waves. ‘The Boy Who Met a Whale’ too -though still far too young for as large a list of accolades as its older sibling- has swimmingly managed to stake for itself a spot as the Indie Book of the Month for January 2021, Guardian Books of the Month, Waterstones Best Books To Look Forward to in 2021, and also been glowingly reviewed in The Daily Mail and the Financial Times, so far.

While its forerunner is centred around spunky young Chaya and a pouchful of royal jewels on a wild elephant chase across the tropical jungles of fictional Serendib, ‘The Boy Who Met a Whale’ takes readers to yet another side of this dazzling emerald isle: its sparking blue oceans and almost-unreal sea life off the coast of an imagined historical Galle.

Siblings Shifa and Razi’s peaceful coast-side life is disrupted by the arrival of big-talking young seafarer Zheng. Now irreversibly intertwined in his far-flung tale of ocean piracy and mythical creatures, the trio embark on a quest to retrieve a stolen artefact; throwing all caution to salty ocean winds and packing all of their wits on board.

And as the majority of reviewers testify, what truly brings Nizrana’s stories to life is the sheer descriptive prowess through which she brings both character and backdrop to life. With vivid portrayals of landscape, tastes, and smells so seamlessly interlaced with fast-paced action, it’s no wonder then that her young readers have come to be so intrigued by the Serendib they have been transported to through these pages.

“Making the story visual was a conscious decision on my part, mainly because I knew that my readership wouldn’t be very familiar with this world. I felt that I had to give them that, because these settings I have in my head others wouldn’t be able to picture unless I tell them expressly; even tastes and smells that I would otherwise know so well wouldn’t be as familiar to those who read my books.”

With scatterings of endearing phrases (.. “and then the rupee dropped,” “going on a wild mongoose chase,”etc.), likeable young characters, and strong moral themes, the escapade is fleshed out in an inimitably Sri Lankan fashion. More respectably, one that is still captivating sans the unfortunate exoticisation that so often tends to find its way through to tales of the island.

As for Lankan readers, they can now delight in more relatable tales of young adventurers and stolen treasure, with pages infused with the familiar presence of swaying coconut trees, juicy mangosteens, and the sunset silhouettes of fishermen’s stilts. Throw in a kidnapping, a colossal sea monster, a thrilling sea vessel chase, and we have the exhilarating adventure that is ‘The Boy Who Met a Whale’. 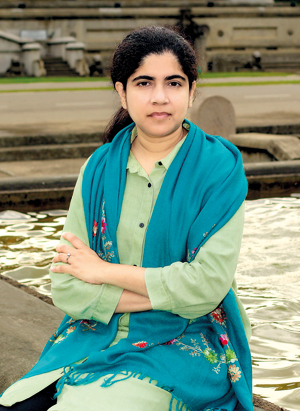 Local bookshops, though, have been slow to stock up on Nizrana’s books. While ‘The Girl Who Stole an Elephant’ did grace the shelves of Sarasavi for a brief period of time (Nizrana’s mum sent her pictures), parents of young readers won’t be able to source either novel as easily as they would like. Thankfully The Book Depository(.com) has resumed shipping to Sri Lanka again, which may prove to be a more successful option.

Now Nizrana speaks from a comfortable place, happy to keep writing books where children the world over can become better acquainted with her own childhood; as opposed to the other way around.

“Writing these books are now very special to me, because this is not just any project. This is a way I get to show and write about my background which is important to me, and which I would have loved to read as a child.”

Disclaimer: First a jumbo, now a whale makes waves - Views expressed by writers in this section are their own and do not necessarily reflect Latheefarook.com point-of-view