A few decades ago, many of those who lived in remote areas of the country might have viewed Colombo city as a paradise, where physical development, business, education and employment opportunities, etc., are concerned. Even the LTTE had used sceneries of Colombo city to brainwash their members during wartime, as there had been such a disparity between the North and Colombo. However, the beauty of Colombo has been tarnishing with time, due to many growing issues.

The city was a hotspot for terrorist attacks especially during wartime and any hope of peace was again lost with the attack that happened two years ago. Further, ever-increasing traffic congestion, air pollution, riverine flooding in areas adjacent to the Kelani river, frequent urban flooding, road closures due to protests, and epidemics like dengue are some other severe issues almost all the residents and working people therein are facing. We can hope that many of these issues will be 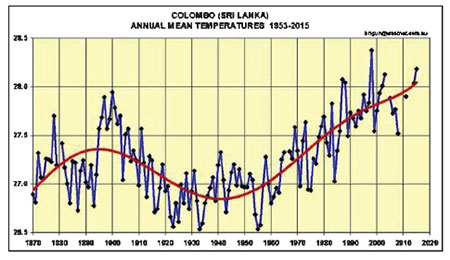 resolved to a satisfactory level by the ongoing and proposed infrastructure development projects in due course. However, unfortunately, emerging adverse phenomena like the heat island effect is making matters worse, and this article is about its implications.

Those who have been living or working in Colombo for a few decades would have experienced that the city is getting hotter and hotter. In fact, it is due to the combined effect of global warming and the urban heat island effect (UHI). An urban heat island occurs when a city experiences higher temperatures than nearby suburban areas.

An Australia-based engineering hydrologist, Brian Gunter, has studied the temperature variation in Colombo and the results, for the period 1940-2015, show that the average temperature has gone up by almost 1.5 degrees of Celsius. It is shocking that according to the current trend, the temperature will further increase in the future. Global warming caused by carbon dioxide and other greenhouse gases is a well-known phenomenon that does not need discussion herein. On the contrary, the heat island effect, which appeals equally important attention, is not widely discussed despite its severe consequences.

Substantiating the above findings Climate Risk Country Profile Report 2020, by the World Bank Group and the Asian Development Bank, on Sri Lanka states that Colombo temperature may have gone up by 1.6 Celsius due to the UHI effect and likely to damage the productivity of the service sector economy. According to the report, the damage will be done by directly impacting labour productivity and through extra costs for necessary adaptation.

There are many causes for the heat island effect and it occurs mainly due to the concentration of a large number of buildings and roads constructed out of concrete, asphalt, steel, and other heat absorbent materials. Waste energy from air conditioners, vehicles, industries, air pollution, and the absence of vegetation also contribute to the UHI effect. Not only daytime temperatures, but nighttime temperatures also increase due to the UHI effect. Different parts of the city may experience different temperatures creating many intra-urban heat islands and temperatures could be much higher than that measured in a general climatic station. The governing factor for such differences would be the uneven distribution of heat-absorbing infrastructure, human activities that generate heat, and the absence of natural landscapes that possess cooling ability.

When cities become heat islands, the need for air conditioning to cool buildings goes up, in turn increasing the energy demand during peak hours while increasing the cost of energy. According to my knowledge, the future electricity demand of the country is forecasted based on the unmet demand together with the projected population increase. Therefore, the extra energy requirement owing to the UHI effect also has to be taken into account by energy sector planners, when calculating the future demand. As the urban population in Colombo is around 750,000 this kind of hidden electricity demand will be significant.

In the meantime, NASA has found that UHI increases rainfall rates around cities by 48 to 116 percent. Colombo already suffers from urban flooding during intense rains resulting in increased traffic congestion and a further increase in local rainfall may aggravate the situation.

Higher daytime temperatures caused by heat can cause heat-related deaths and heat-related illnesses such as general discomfort, respiratory difficulties, heat cramps, heat exhaustion, and non-fatal heat stroke. Therefore, those who are sensitive to heat and have to engage in outdoor activities are likely to be affected.

Trees, wetlands, and water bodies play an important role in controlling the heat island effect. Green infrastructure like parks, rain gardens, green roofs, and the likes also contribute significantly to mitigating the effect. Unfortunately, what we experience is a rapid decrease in such natural green areas, especially wetlands due to development activities, even though in 2018, Colombo was declared an international wetland city by Ramsar. According to experts, Colombo wetlands are shrinking at a rapid rate of 1.2 percent or 57 acres per annum.

Thus, the UHI effect in Colombo will more or less affect the quality of life of its dwellers and those who commute for work, education, business, and other necessities. The low-income population living in the city who cannot afford air-conditioning and those who are exposed to the outer environment will be most vulnerable. Therefore, the issue of UHI effect in Colombo will not merely be an environmental issue but a socio-economic issue as well.

As mentioned, the UHI effect is partly the result of global warming, a scenario we alone cannot control. However, we can manage factors that contribute to the UHI effect by first and foremost nurturing the existing green environment in Colombo. Other than that, only a few pragmatic options are available to mitigate the situation. Developing green roofs covered with plants, using lighter-coloured material for the outer surfaces of buildings, shading building surfaces with vegetation, and transforming every possible space to green spaces are some options that could modify the physical environment. In addition, the use of energy-efficient manufacturing technologies, vehicles, and equipment will also be helpful.

Disclaimer: Colombo becoming hotter making life more challenging By Eng. Thushara Dissanayake - Views expressed by writers in this section are their own and do not necessarily reflect Latheefarook.com point-of-view