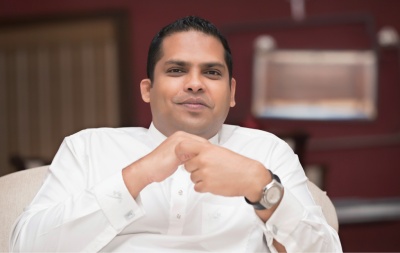 Today, SJB MP Harin Fernando is being hounded for his explosive revelations about the Easter Sunday attacks

When SJB MP Harin Fernando stood up in Parliament, donned a black shawl and made his explosive speech about the Easter Sunday attack, his audience would have reacted along partisan lines. But on one point, his supporters and detractors would have been in agreement. As they listened to him, they would have thought, that chap is definitely going to be arrested any day now.

If you are loyal to the regime, you enjoy virtual impunity to commit a crime of your choosing. But if you cross this government, it is only a matter of time before you find yourself in jail or facing trial.

A fierce fighter with an acute political compass, it was Fernando who debuted and popularised the phrase “Sir Fail”. For his trouble, he was warned that if he did not back down, he would be treated like Prabhakaran.

Today Harin Fernando is being hounded for his explosive revelations about the Easter Sunday attacks. Violating sacred parliamentary privileges, the Government is said to have plans to arrest him under the same Prevention of Terrorism Act (PTA) that was enacted to destroy Prabhakaran. When it comes to treating Fernando like Prabhakaran, that seems to be the only promise being kept.

Since the majority of the mainstream media are slavishly loyal to the Government, censoring or twisting any news that casts the Government in a poor light, many Sri Lankans are unaware of the degree to which the Police and the justice system are being used as instruments of revenge by the Government.

Even if the message gets across, ordinary people focused on surviving a pandemic and struggling with issues as cost of living, poverty, unemployment and even the lack of such basics as adequate water and sanitation, may not see the danger of rising authoritarianism.

Where are the ‘Viyathmaga’ and ‘Eliya’ supporters?

But what about those professionals and business people who hoodwinked the masses into voting for this Government twice? Where are they today when their super-efficient Government issues a gazette in the morning, cancels it in the afternoon, and reissues it in the evening? Today it will be much easier to find a dozen needles in as many haystacks than to find a single person willing to own or defend the ‘Viyathmaga’ and ‘Eliya’ movements. These people, who knew all along precisely what they were asking Sri Lankans to vote for are now nowhere to be seen.

Many of them have accepted plum Government jobs, and quietly removed all mention of Viyathmaga from their professional profiles and CVs. Others have been rewarded for their loyalty with lucrative Government “deals” and tenders, blowing up the prices of essential commodities to make fat profits at the expense of the people.

It is not as if they didn’t know what they were doing. They often use the excuse “but the Rajapaksas won the war,” while conveniently forgetting that Rajapaksas also jailed the Army Commander who won the war, Field Marshal Sarath Fonseka.  Then General Fonseka was dragged out of his office, as if he was not the man who gave military leadership to the troops, but an animal. He was arrested for allegedly conspiring to kill the President and Defence Secretary but was tried on a trumped-up charge of corruption before a kangaroo court.

He was one of the luckier ones. He is still alive, Lasantha Wickrematunge is not. Prageeth Eknaligoda is not. The 11 boys abducted from Colombo are not. They were not even critics of the Government. The list goes on.

What we are seeing today is a repeat performance. 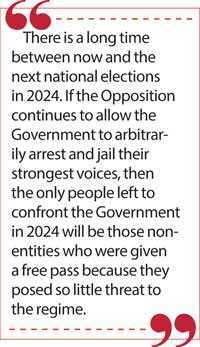 Who will be targeted or arrested next?

M.A. Sumanthiran, one of the regime’s strongest critics, recently had his security withdrawn. The Minister of Law and Order, Sarath Weerasekara, had the audacity to admit in Parliament that he took a political decision to order the Police to withdraw Sumanthiran’s security because he had said and done things to irk the Government.

Sumanthiran has survived more attempts on his life than “war hero” Weerasekara has seen days of combat. God forbid, if the TNA stalwart were to be attacked and Police officers were held responsible for deliberately exposing him to danger, Weerasekara will pretend he had nothing to do with it and hide behind parliamentary privilege.

Across the board, it has become a trivial exercise to guess the order in who will be targeted or arrested next. It is almost directly proportional to how fiercely they have criticised the Government. Two of the most articulate and eloquent early opponents of the Government, Patali Champika Ranawaka and Dr. Rajitha Senaratne, were the first to be arrested, charged with reckless driving, failure to avoid an accident or holding a press conference.

Next was lawyer Hejaaz Hizbullah, who helped defeat the 52-day coup and was an early and ferocious opponent of the barbaric and uniquely Sri Lankan decision to forcibly cremate Muslim victims of COVID-19. The Attorney General’s Department first told Court that he was one of the “masterminds” behind the Easter terror attacks. A year later, with no evidence of him having anything to do with the bombing, he was charged with teaching extremism at a school for impoverished youth.

Last July, it was former CID Director Shani Abeysekara’s turn. From 2015 to 2019, the “Joint Opposition” ceaselessly attacked Abeysekara for alleged crimes he was supposed to have been committing during the Yahapalanaya regime. But all that talk disappeared after they came to power.

To trump up any argument to justify his arrest after coming to power, the Government had to go all the way back to 2013, to a murder investigation he conducted on the orders of the then President. Seven years later, vulnerable witnesses have suddenly “remembered” that Abeysekara had planted evidence to frame former DIG Vaas Gunawardena for a murder of which he has been convicted by a three-judge trial-at-bar.

The next to go in was another vocal critic, Ranjan Ramanayake, who was convicted and sentenced to four years’ imprisonment for saying that lawyers and judges in Sri Lanka are corrupt. While government MPs convicted of murder and sentenced to death are allowed to remain in Parliament while their appeals are pending, Ramanayake was denied even a chance to appeal his conviction, and he was swiftly expelled from Parliament.

On Friday, MP Rishad Bathiudeen made a fiery speech in Parliament denouncing extremism and racism, and taking the Government head-on. Within 24 hours, the CID was at his doorstep, and he was arrested and detained under the PTA, along with his brother. Apparently, they too, are masterminds of the Easter attacks. It seems all that was necessary to bring that “fact” to light was for Bathiudeen to take on the Government.

The 6.9 million voters who put their faith in the Podujana Party did so hoping that they would solve a lot of their problems, lift them out of poverty, and develop their country. These are ambitious tasks, and they require time and attention at the highest level. But where would the Government find time to serve the people when its number one priority remains arresting and hounding those who criticise them?

The Government will continue to misuse the police and the legal system to hunt its critics. If Harin Fernando’s turn doesn’t come tomorrow, it will come someday. Parliamentarians such as Manusha Nanayakkara, Sarath Fonseka and Mujuber Rahman, who are fiercely critical of the Government in Parliament, too may find themselves facing spurious charges before long.

Then there are the absurd attempts to connect that peerless critic of the Government, Anura Kumara Dissanayake, with the Easter bombing. The possibility may seem ludicrous now. But who imagined that the Army Commander who won the war would be framed and arrested until we saw it happen?

Officials and Police officers must now think twice before participating in personal vendettas and breaking the law in the process. When you are given an illegal order, the honourable thing to do is to refuse to carry it out, and if necessary, to put country first and resign in protest. In the long run, that is a far more preferable outcome to being tarred by history as a political stooge, or worse, for your children or extended family to be remembered as those of an official who made arrests or prepared indictments at the beck and call of politicians.

There is a long time between now and the next national elections in 2024. If the Opposition continues to allow the Government to arbitrarily arrest and jail their strongest voices, then the only people left to confront the Government in 2024 will be those nonentities who were given a free pass because they posed so little threat to the regime.

Disclaimer: Harin was not the first target, nor will he be the last! By Krishantha prasad cooray - Views expressed by writers in this section are their own and do not necessarily reflect Latheefarook.com point-of-view